It's not a secret that Disney movies are on another level. Whenever Disney gets brought up in a conversation, our body begins to cover with goosebumps, and our brain fills up with nostalgic and tender memories.

A kid who begs to watch Frozen yet another time or a person who was lucky enough to be there for Cinderella's premiere – Disney has always been incredible at meeting all the generations halfway.

The Walt Disney Company is famous for embracing good life values with those spectacular storylines. For example, Disney's number one moral is how important our close ones are – just look at that good old bond between Winnie The Pooh and Piglet! Also, diversity plays a significant role in Disney, as characters come from different ethnicities and backgrounds, which helps people get together. As well as that, we can't forget Disney's sweet messages about true love and happy ever afters. Even if we know that life can't guarantee us those things – Disney can always help us escape into its world of magic.

In 2010, The Walt Disney Company surprised us with its 50th and yet another stunning movie – Tangled. The animation probably has to be the most exciting one, as it's Disney's first computer-animated princess movie. To be more specific, Tangled just passed its 11th anniversary and to get to know it better, here are a few exciting facts that will make you want to rewatch it right now:

We all know that Mother Gothel is an old lady since she kidnapped Rapunzel and locked her in a tower purely to keep herself young and beautiful forever – however, Tangled never disclosed her actual age. But if we could look at the style of Mother Gothel's dress, we will notice that it comes from the Renaissance Era, and since we know that Tangled takes place around the late 1700s, it means that the woman has been around for over 400 years! 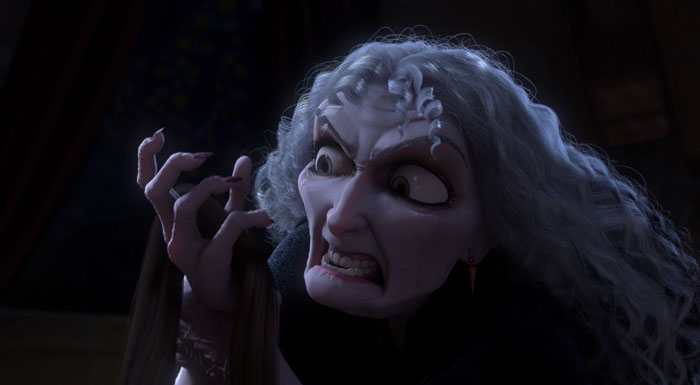 #2 At A Festival Dedicated To Rapunzel, The Princess Unknowingly Caught Her Parents' Lantern

The lantern festival starts out as a celebration for the baby princess. Though, when Mother Gothel kidnapped Rapunzel, the event took a completely different turn. The lanterns would set the sky alight on Rapunzel's birthday in hope that they would guide her back home.

Rapunzel was always fascinated by the festival, and when she finally got to see it, a lantern that she floated back up into the air happened to be the only one with the royal emblem – which is the lantern that her parents sent into the sky.

#3 Pascal Was Supposed To Be A Squirrel

In the early developments of the movie, Rapunzel's adorable companion was actually supposed to be a squirrel. Pascal was meant to be a furry long-tailed cutie – however, he was later designed based on a real chameleon owned by one of the workers! After it was decided that Pascal should be a reptile, Disney thought about making him purple. But in the end, a green chameleon was the best match that also happened to go well with Rapunzel's dress. 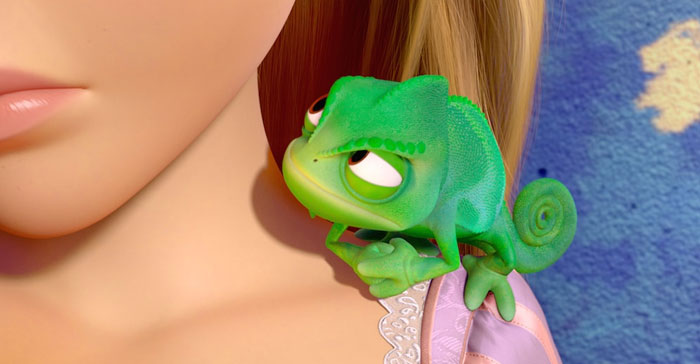 Flynn Rider, or shall we call him Eugene Fitzherbert – was lucky enough to get a lot of attention from the female colleagues of the studio during his creation.

Nathan Greno, who is one of the Tangled directors, revealed that the charming adventurer went through a number of "hot man" meetings before appearing to us as Flynn Rider that we know. The process involved women bringing pictures of the "hottest hunks" in Hollywood, putting them up on the walls and taking bits from each man to create the ultimate character. 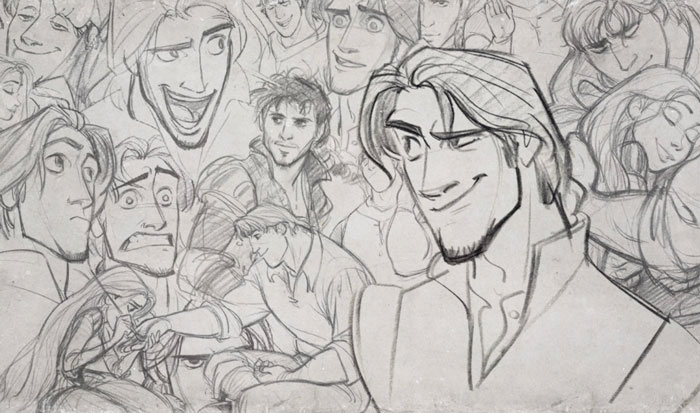 #5 Maximus Used A Roman Sword In A Fight With Flynn

In the scene where Maximus fights Flynn, it appears that Maximus has a Roman sword that he uses for when things go south. This is a nice touch to the movie as Maximus is a famous fictional character in the Gladiator movie. Moreover, the name happened to mean "greatest", which goes exceptionally well with Maximus's personality, am I right? 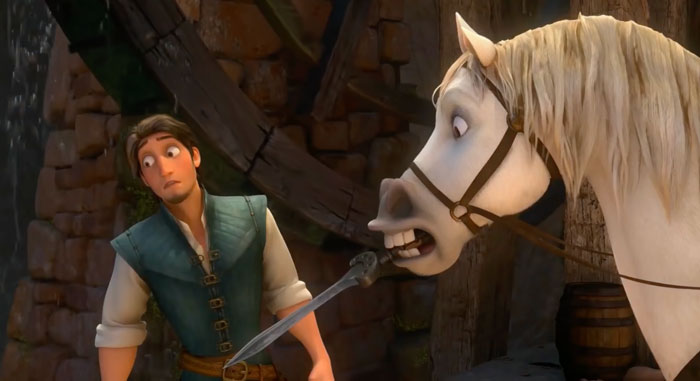 The Kingdom of Corona was inspired by one of the most visited places in France – the Mont Saint-Michel on the Normandy Coast, which before the pandemic used to welcome nearly 2.5 million guests every year.

The island is still a home to 44 residents, including the nuns and monks that live in the Abbey and is on the UNESCO list of World Heritage Sites. Moreover, the monastery was also an inspiration for the city of Minas Tirith, which is a location in the Lord Of The Rings. 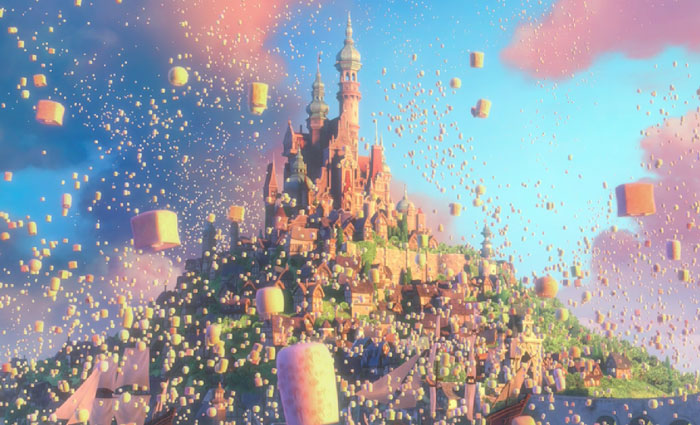 #7 Flynn Rider's Character Was Based On Many Legends, Including Errol Flynn

Flynn Rider was actually supposed to be a British farmer, but his character eventually grew into a swashbuckling thief. Inspirations included Han Solo, Indiana Jones and actors like Gene Kelly and Errol Flynn. Some noticed a lot of similarities with Errol Flynn – specifically, because of his role in Robin Hood. 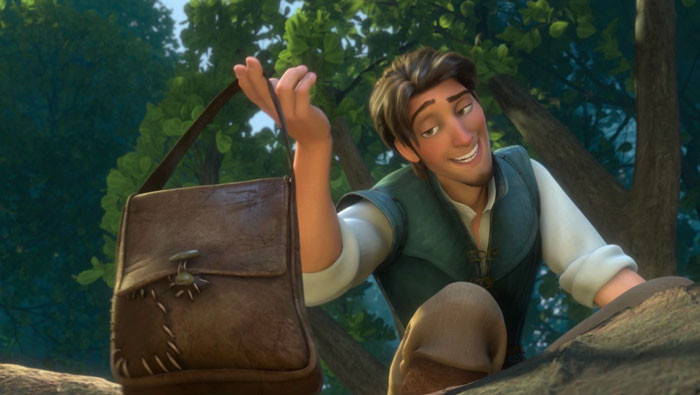 Did you know that to this day, Tangled still remains Disney's most expensive animated film and nearly tops the list of most expensive movies ever made, where Pirates of the Caribbean: At World's End - takes a leading position with a budget of $300 million?

Tangled had been in production for 6 years and cost a whopping $260 million. The reasoning behind such a huge amount would be the combination of hand-drawn animation and computer graphics. 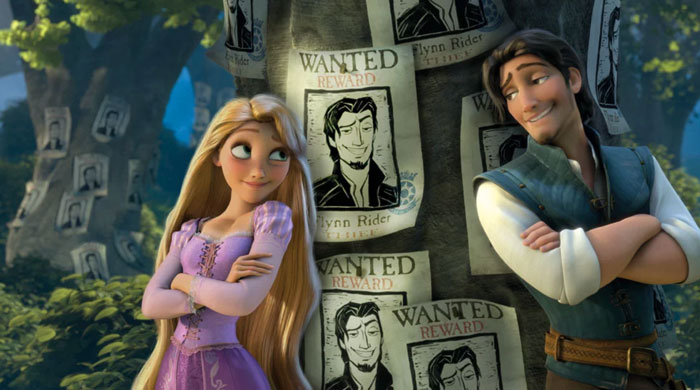 #9 Rapunzel Most Likely Has The Biggest Eyes Amongst Disney Princesses

Up until 2013 when Frozen came out, Rapunzel had the biggest eyes amongst Disney princesses. Now if you'd compare them it would be hard to tell which princess is the lucky owner of the biggest eyes, as it seems that the size is similar yet the shape is different.

In fact, many people are weirded out as to why it has become a thing to draw women's eyes, or women's faces in general, so out of proportion. Some say that it's due to an instinct in humans, that gets us into a "omg so cute, I think I'm going to cry" state when we see something baby-like. Do you think that this is the case? 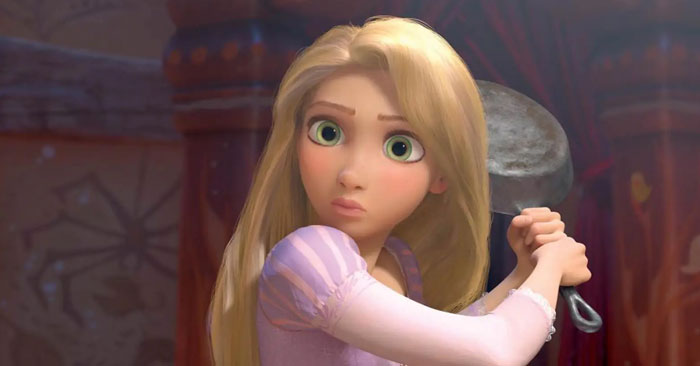 #10 Frozen Cast That Auditioned For The Role Of Rapunzel

Mandy Moore said she was lucky enough to finally make her dream come true after becoming a Disney princess – however, did you know that Kristen Bell and Idina Menzel also auditioned for the role of Rapunzel? Even though they weren't approved for the main role in Tangled, Disney had a completely different plan for them! 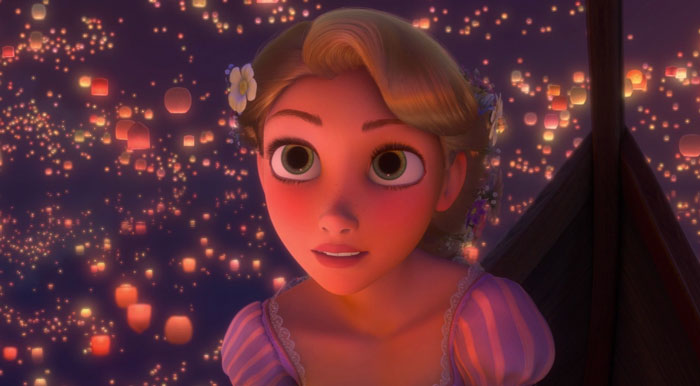 Kelly Ward, who is a senior software engineer at Walt Disney Animation Studios, was finishing up her PhD in model and animation of human hair when Disney contacted her about Tangled.

The official part of the story is that Rapunzel's luscious locks are 70 feet long, but Ward also mentioned that the hair would weigh between 60-80 lbs! However, Kelly Ward and the team developed different ways that would "trick the physics", as the hair had to look like it would easily cooperate with the main character, while also having some weight to it. 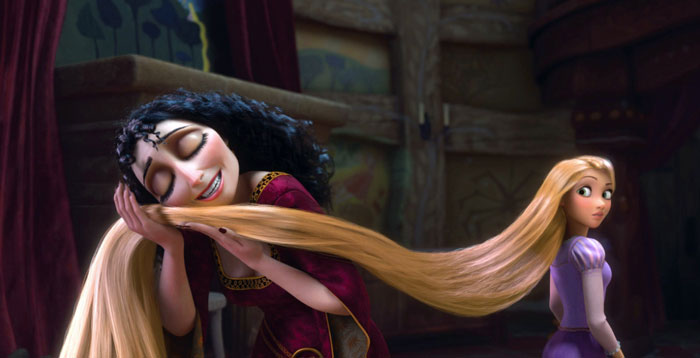 We all know how Disney likes to hide little clues, or shall I say – easter eggs, from their previous works in movies. Tangled is not an exception!

Pinocchio was hiding away during the Snuggly Duckling scene; Rapunzel had painted the staircase in her tower with symbols from other Disney movies, like an apple for the Snow White, a slipper for Cinderella, a rose for Belle and a shell for Ariel. As well as that, Rapunzel and Eugene themselves appeared in Frozen when Arendelle's gates finally re-opened for Elsa's coronation day. 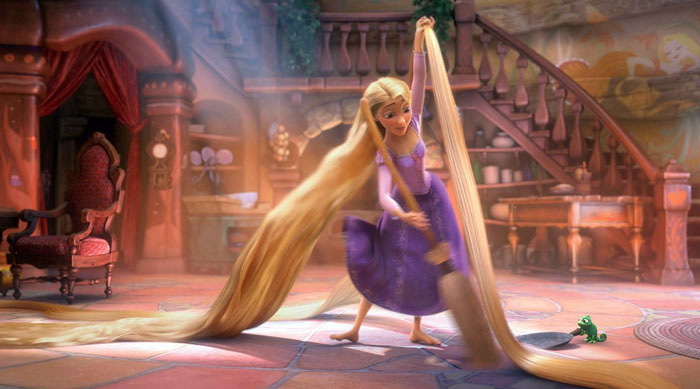 In the opening scene, where Rapunzel is still a baby, we see her in the crib, looking up at the baby mobile. Well, that mobile is a hint to what the princess is going to go through. A green chameleon and a white horse are pretty explanatory – that's Maximus and Pascal. A blue bird and Cupid both appear during the musical scenes of "When Will My Life Begin?" and "I've Got A Dream". And last but not least, a duck that symbolises The Snuggly Duckling. 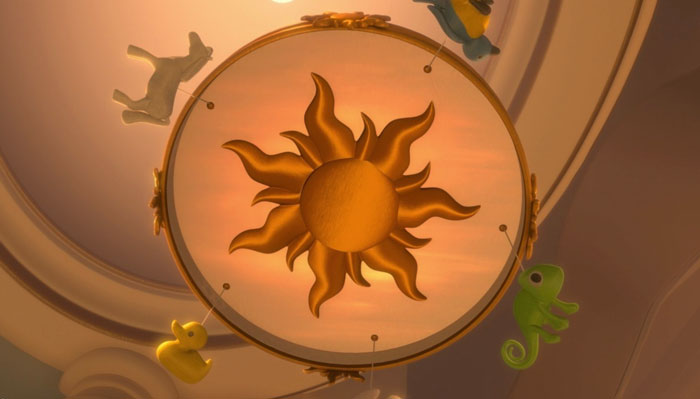 #14 Maximus And Pascal Were Both Voiced By Frank Welker

A legend amongst voice actors, who has done over 800 voice impressions in animated films, shows, games and commercials, was actually responsible for voicing both Maximus and Pascal.

Frank Welker is famous for impersonating animals and creatures: for instance, he voiced 16 characters in Futurama as well as Fred Jones and Scooby himself. Welker has also worked with other Disney movies, such as Aladdin, The Little Mermaid, Pocahontas and many more. 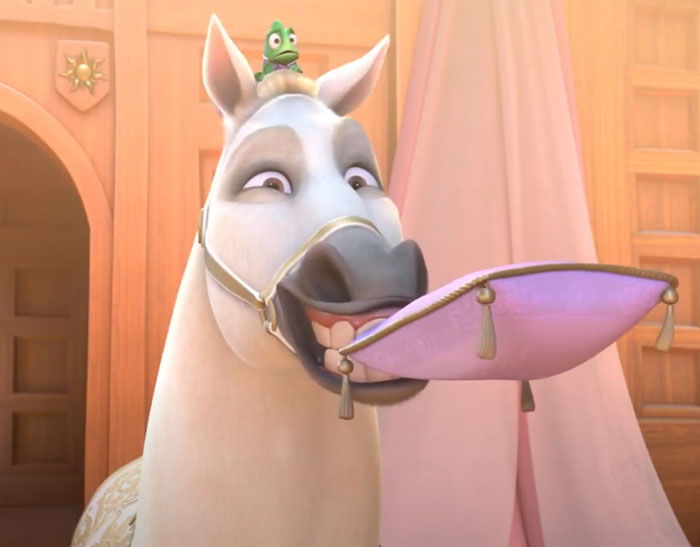 #15 The Age Difference Between Flynn And Rapunzel

In the movie, Flynn Rider was 26 years old, and Rapunzel was about to turn 18. It means that this sweet couple had an eight-year difference, but they weren't the only ones with a surprising age gap. To this day, the most controversial Disney couple with a 17-year gap is Snow White and Prince Florian, where Snow White is believed to be only 14 years old. 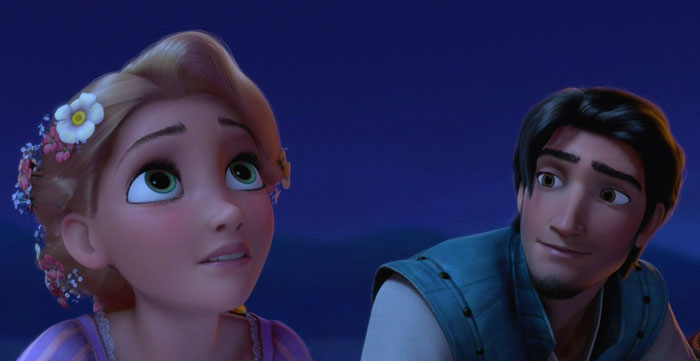 #16 Disney Wanted To Use Fireworks Instead Of Lanterns

At first, animators wanted to use fireworks instead of lanterns. But John Ripa, who is a story artist, came up with the idea of using lanterns. The team called up a meeting to show John Lasseter, who was still a chief creative officer of Walt Disney Animation at that time, thinking that the idea would surprise him. However, Lasseter was already familiar with lanterns as he lit one up with his wife on their anniversary, but he still loved the idea. 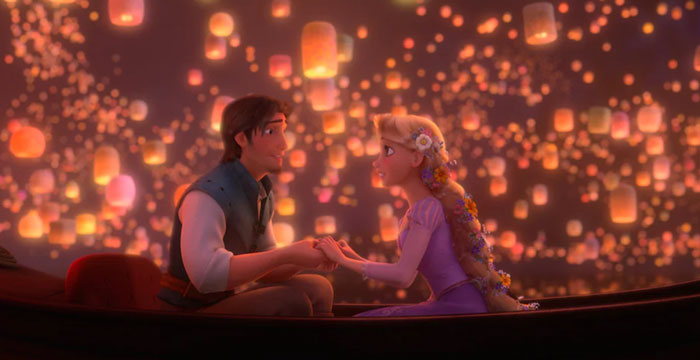 Here Are 10 Photos Of Me And My Child That Show... FBI document shows how easy it is to access...