Christian Supervisor Finds Out Their Employee Got A Norse Tattoo, Calls Them “An Evil Satan Worshipper” The freedom of religion is an integral part of a healthy and functioning civilization. It’s also a fundamental human right in most parts of the world. But when it comes to all sensitive topics, some people don’t see any shades of grey: it’s either their way or eternal damnation and hellfire if you dare do anything else.

Those same people tend to believe that anyone who doesn’t follow their particular religious denomination is a satanist (though if you’d like to learn about The Satanic Temple’s charitable work, you can read Bored Panda’s article right over here, later). The sad reality is that quite a few religious fanatics can be found in the United States. Somewhat ironic, considering that the very first colonists were running from religious persecution in the Old World (though some think US religious tolerance is a myth).

Redditor u/ITAKEYASQUAD shared how their supervisor accused them of being “an evil satan worshipper” after finding out about their tattoo. The ink in question? A series of runes related to the OP’s Norse pagan beliefs. There are several important issues at play here. And we need to untangle all of them. Scroll down for the full story, dear Pandas.

Bored Panda reached out to David McKinlay, the owner of the Archangel 1608 Tattoo Studio in Glasgow, to hear his thoughts about people being discriminated against because of their tattoos. He also said that it’s commendable to be so proud of your beliefs that you choose to get a tattoo related to them. Scroll down for our full interview with tattoo artist David, from Scotland. 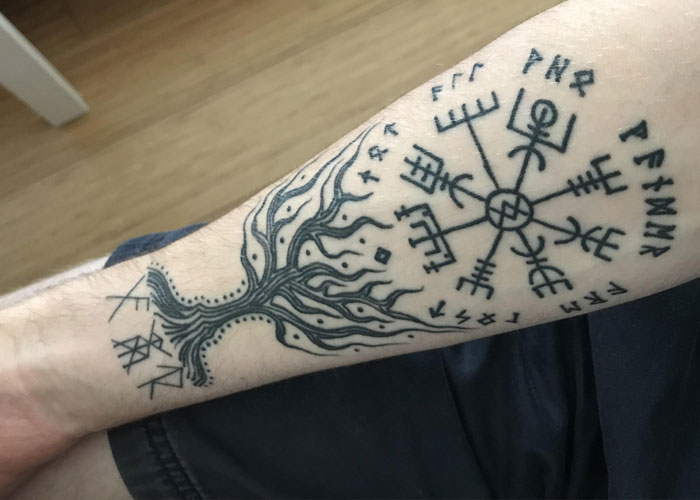 Their boss harassed them, calling them ‘evil’ and saying that they were bound for hell. Here is what happened, in the author’s own words 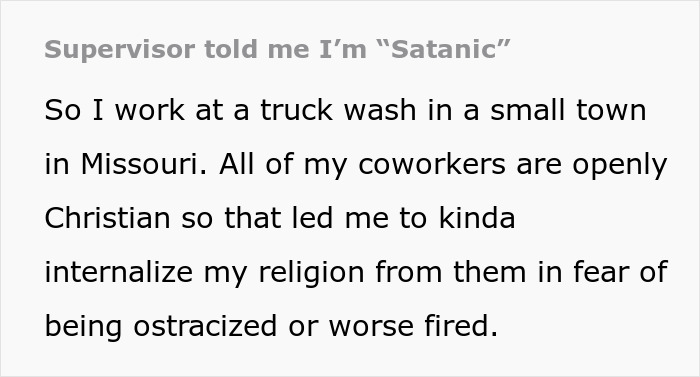 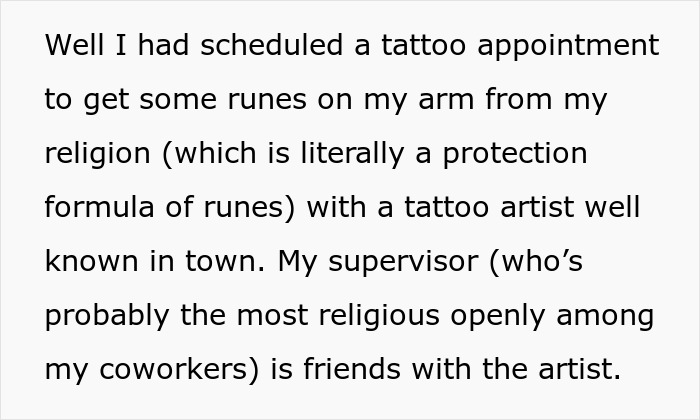 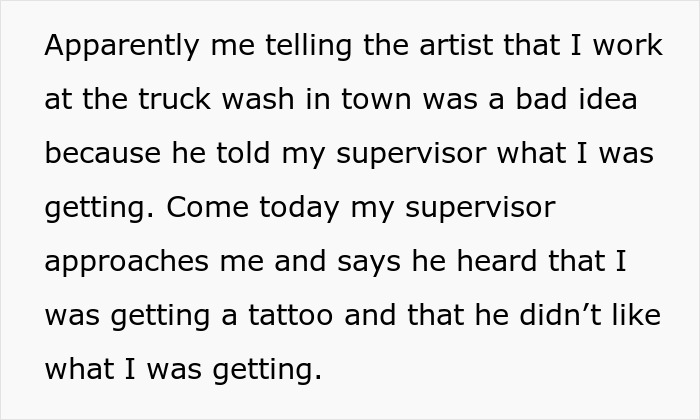 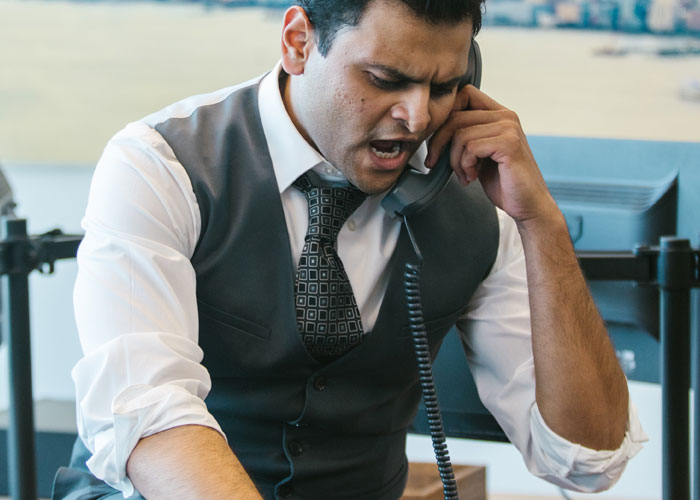 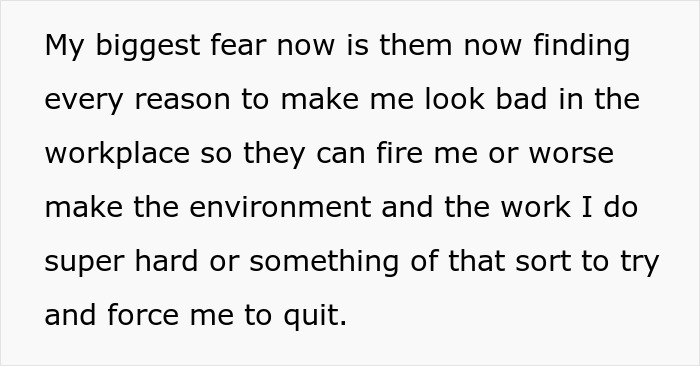 We got in touch with David, the owner of the Archangel 1608 Tattoo Studio in Glasgow, Scotland, to hear his take on discrimination against people who get inked.

“We’re hearing less and less about these situations, which is good. It’s just unfortunate that they happen at all,” he told us. However, he noted that it’s difficult to tell if someone complaining about tattoos or accusing tattooed people of something is coming form a place of ignorance or intolerance. Ironically, these are “both things that most religions preach against.”

“You can try and educate them about their misconceptions and hate, but generally they’re so far rooted in the beliefs that it’s hard for them to accept facts and information that against their prejudiced misconceptions,” the tattoo artist told Bored Panda. “It’s probably harder to deal with when it’s someone at your place of work, as it’s harder to avoid them and their bile.”

We also wanted to find out how widespread religious tattoos are, at least in artist David’s experience.

“Religious tattoos are quite popular, especially pagan/Norse, Christian, and Buddhist. We do other religions’ tattoos as well, though not as often,” he shared with Bored Panda. “I think it’s people proud to show their beliefs, and literally wear it on their skin.”

There are anti-discrimination laws in place for exactly the types of situations that redditor u/ITAKEYASQUAD has to deal with. As the OP mentions in a few comments, they’re recording their interactions with their supervisor now. To oversimplify things, if the manager continues harassing their employee, they’ll end up in a ton of legal trouble.

Now, as to the tangled mess of issues that the story revealed. First of all, there’s the holier-than-thou attitude that’s rooted in a Manichean (good vs. evil) perspective. Some people tend to see the world in a very black-and-white way, leaving little room for nuance. It’s this type of thinking that tends to make people vulnerable to conspiracy theories, as we’ve covered on Bored Panda before.

Secondly, we have to look at the breach of trust that happened in town. The Missouri tattoo artist is friends with the post author’s supervisor. They blabbed about the Norse pagan ink. And that led to the whole brimstone-and-hellfire confrontation. You’d expect the tattoo artist to be more subtle and not gossip about their clients. Especially if it’s about a non-Christian tattoo in a very religious small town in Missouri.

Lastly, there’s the whole workplace dynamic to consider here. Clearly, the supervisor is a very judgmental and moralizing individual. You’d think that in 2022 managers would look at a person’s skills, character, and track record, instead of focusing on their appearance and beliefs. At the end of the day, every employee decides for themselves where to draw the line when it comes to such hostile behavior.

If talking it out with your boss doesn’t lead to any changes and if HR doesn’t take any steps (if there are any HR personnel at all in the company!), then it’s best to either look for other employment or seek legal representation.

Naturally, that’s easier said than done: it’s incredibly difficult to stand out from the crowd in small communities. Finding further employment may be extremely hard if you ever get into an argument with someone who has influence in the town. But there’s really no excuse for bullying. And the best counter to that is documenting evidence of when harassment happens.

What do you think of the entire situation? Have you ever been discriminated against because of your religion, your ink, or how you look? Let us know what happened and what you did next in the comments. 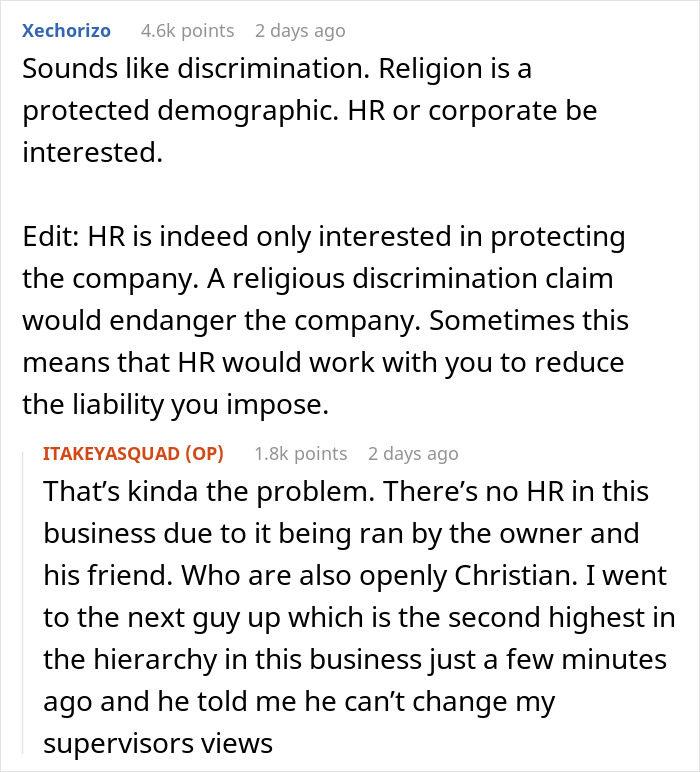 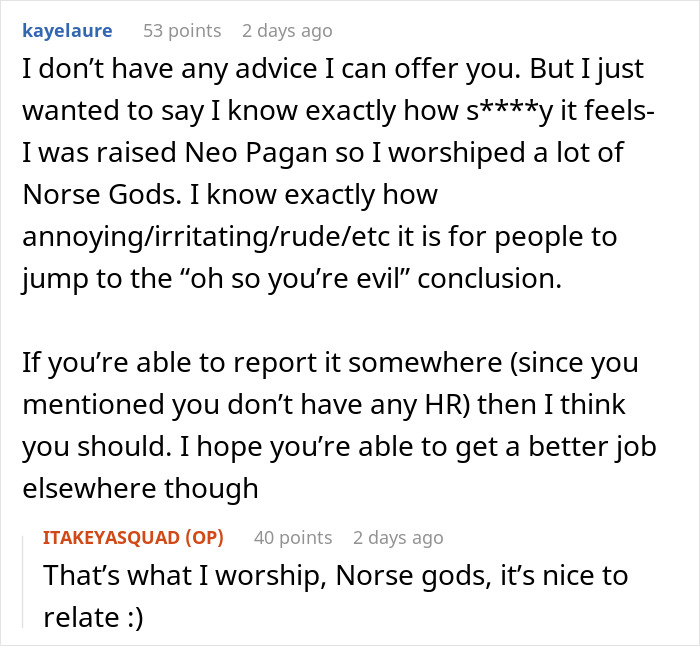 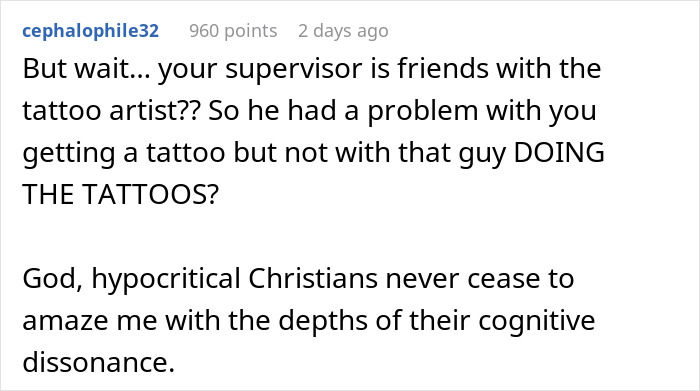 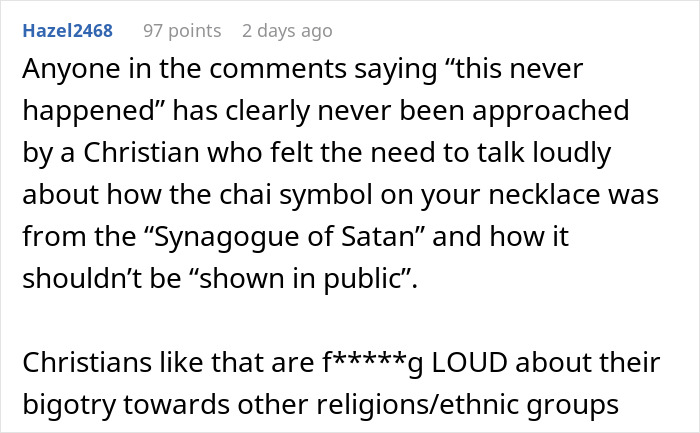 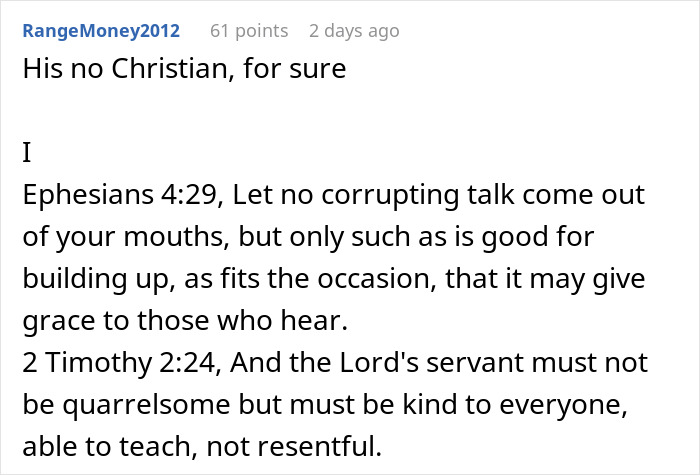 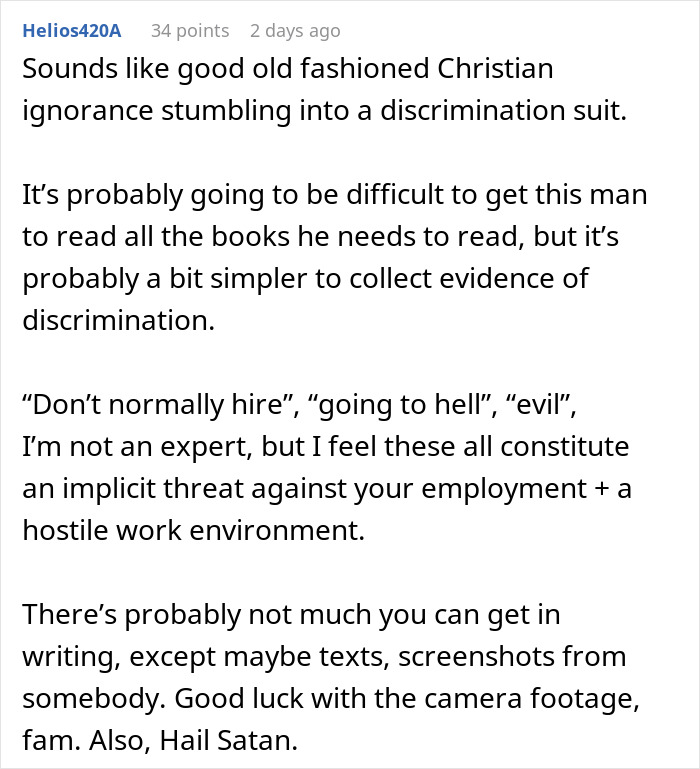 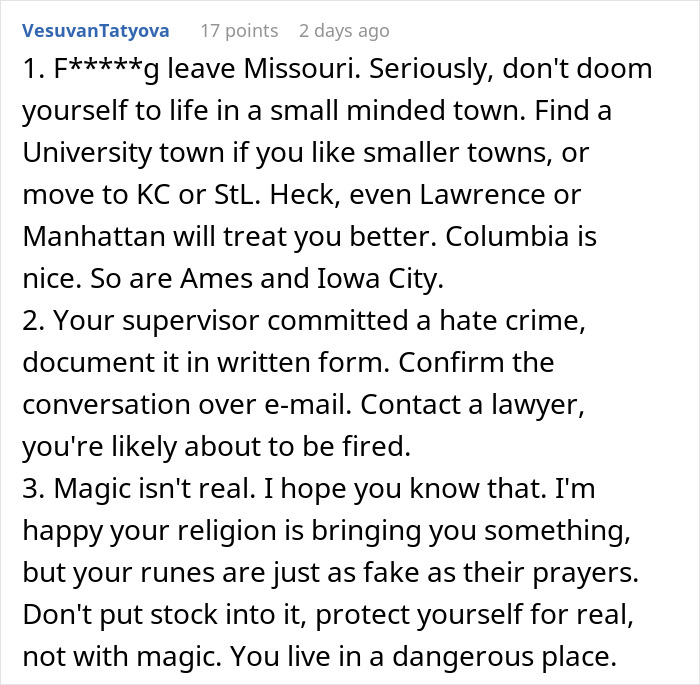 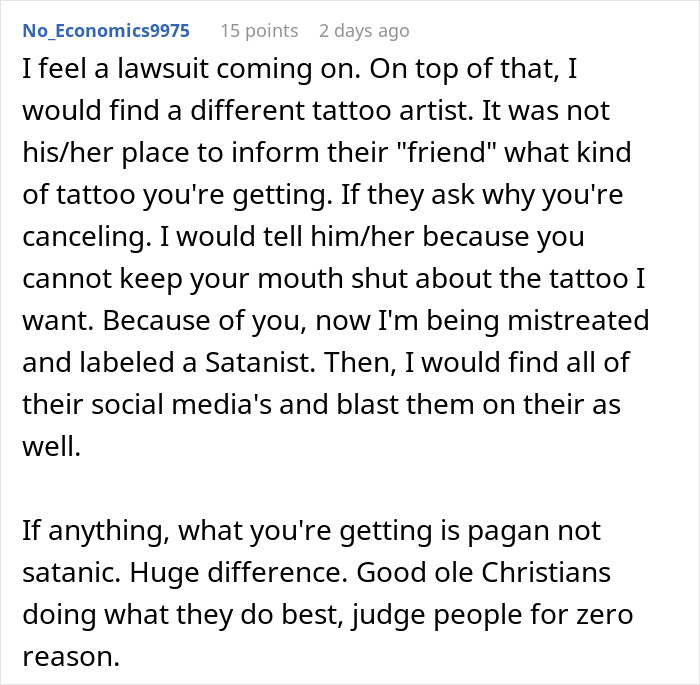 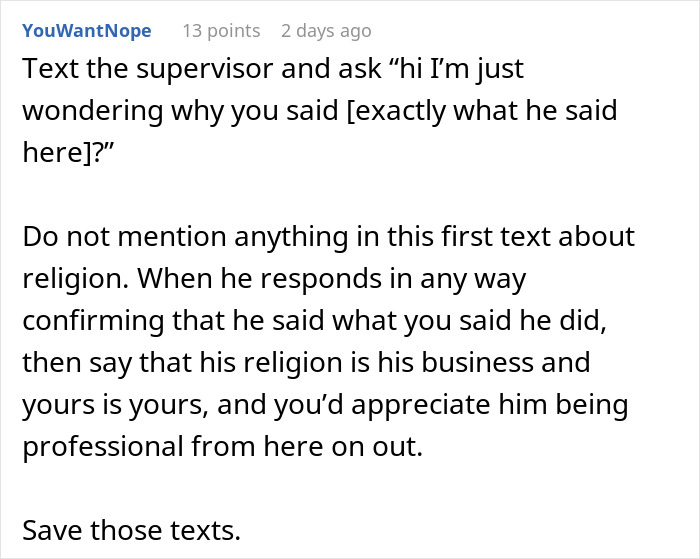 The post Christian Supervisor Finds Out Their Employee Got A Norse Tattoo, Calls Them “An Evil Satan Worshipper” first appeared on Bored Panda. Bride Is Furious At Sister Because She “Will...