Financial equality sounds like a utopia and it probably won’t ever be reached and maybe it shouldn’t be. If you think about it, different jobs require different levels of responsibility, knowledge and skills, so different positions and professions have different monetary value.

But sometimes the value put on some professionals doesn’t seem fair in comparison to other working people. A viral video with almost 15 million views sparked people’s anger to learn that a Costco employee is getting almost $30 per hour when a medical professional earns the same. Another TikToker responded to the video and reflected on the comments, saying that it shows how some employers undervalue their employees.

A Costco employee shared she earns $29.50 an hour for drawing smiley faces on receipts and a lot of people got upset 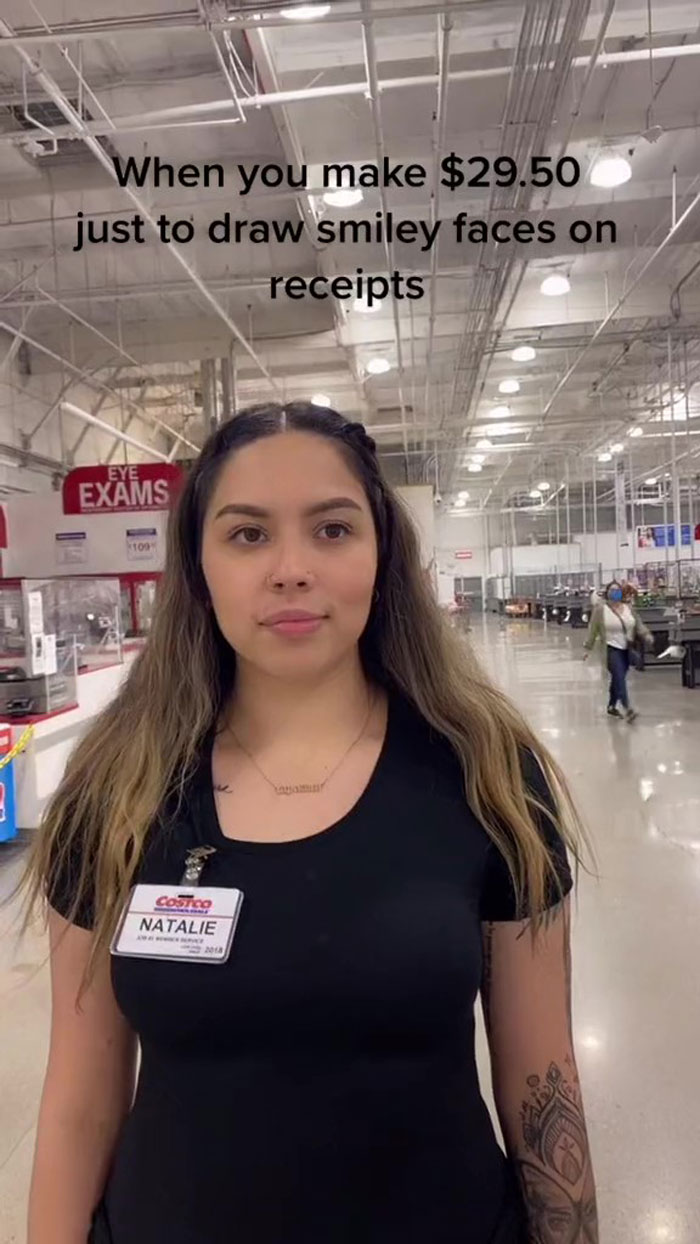 The viral video was posted by Natalie and in it she expressed her enjoyment of working at Costco as she makes $29.50 per hour ‘just to draw smiley faces on receipts.’ You might find such a task strange if you’ve never heard about Costco’s tradition of putting smiley faces on the receipts as the worker checks it before a customer leaves. 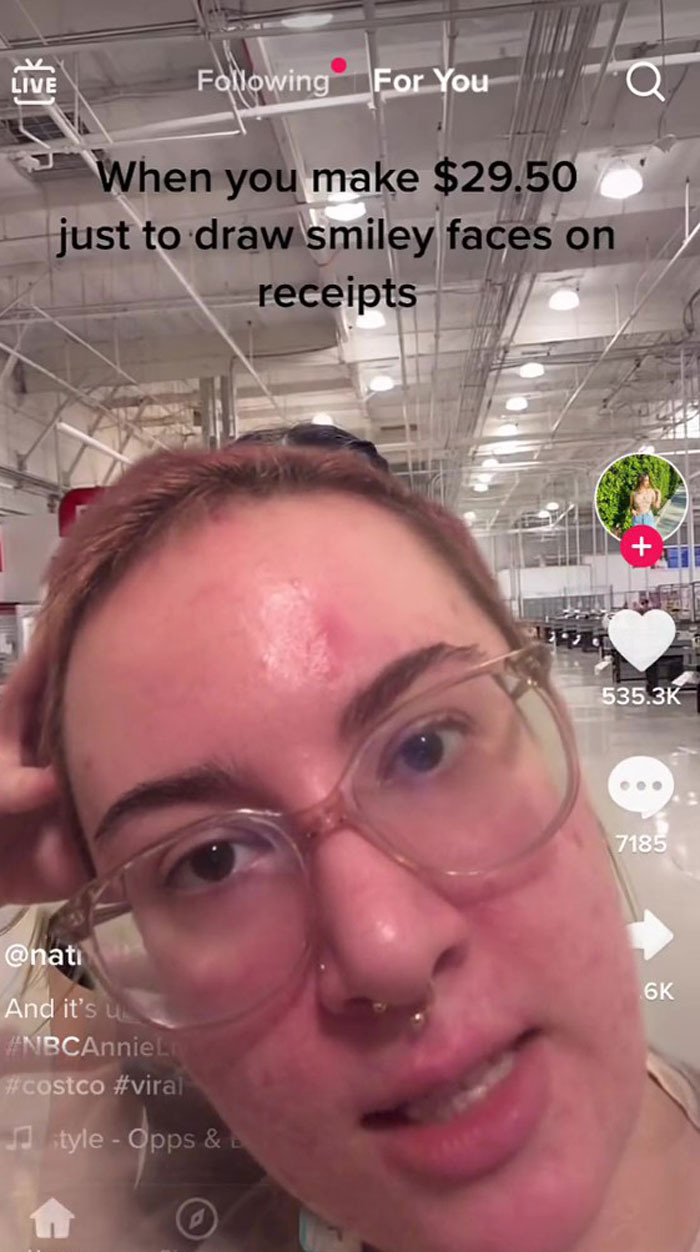 As the video was seen by so many people, it inevitably made some of them get outraged that such an ‘easy job’ pays as much money as being a nurse does because smiley faces don’t save lives.

The comments section was flooded with similar statements, but another TikToker wanted to give people a different perspective. The TikToker’s name is Khaleah and their response to Natalie’s video’s comments also went viral because it actually revealed a different problem. 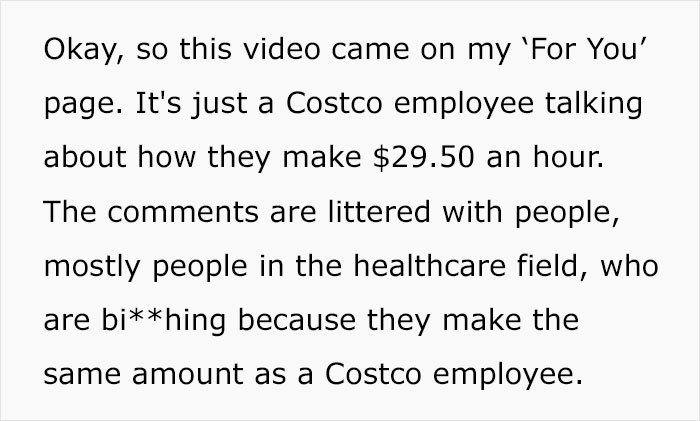 In that video Khaleah shows a comment that says, “I’m out there saving lives and you’re putting smiley faces on paper AND we have the same pay… Make it make sense.” They say that they noticed a lot of these kinds of comments in which people expressed their opinion that retail or food industry jobs are easier so they should be paid less than, for example, medical professionals.

Of course, people who have studied for their degrees to get a certain job or who worked a lot to have experience to be able to get further in their careers have a right to be upset. But what Khaleah found wrong in this sentiment is that people wished for others to earn less instead of blaming their own employees who don’t value their employers as much to provide them with an appropriate salary. 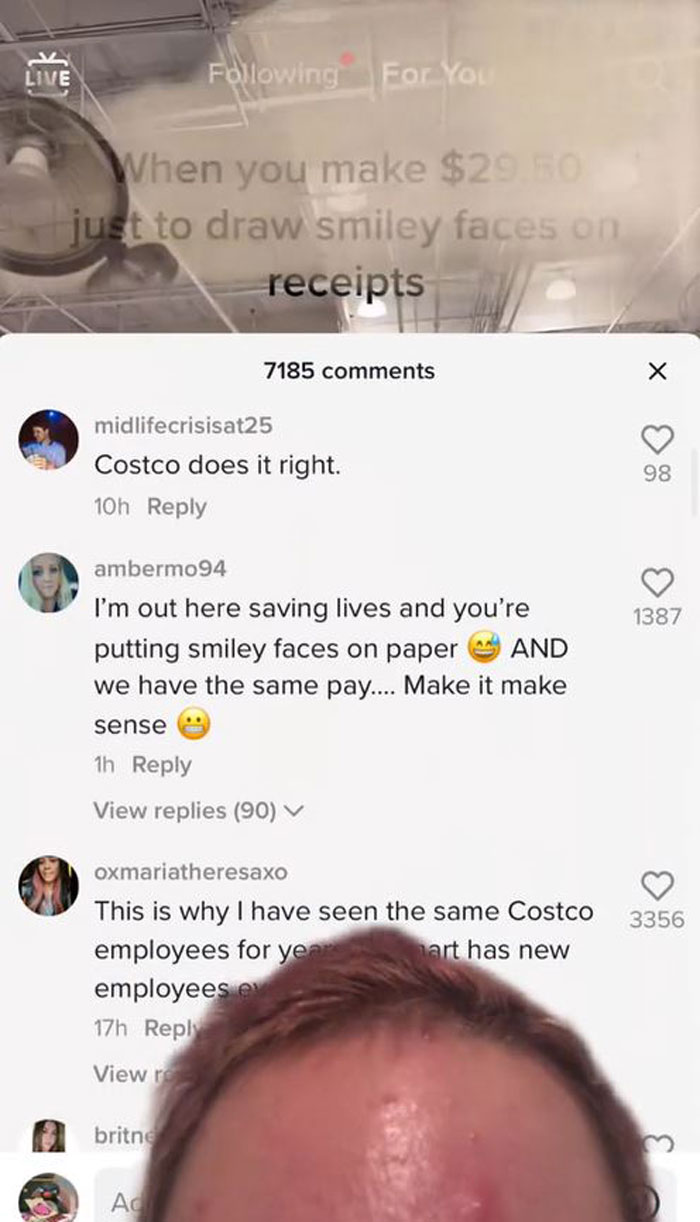 It is sad that the only solution that people can see is making others have a worse financial state. It is true that $30 per hour is a lot more than the federal minimum wage, which is $7.25, but people should be able to live normal fulfilling lives instead of just surviving, no matter what job they have. And those who need to get an education and work their way to the position they want should be awarded accordingly. 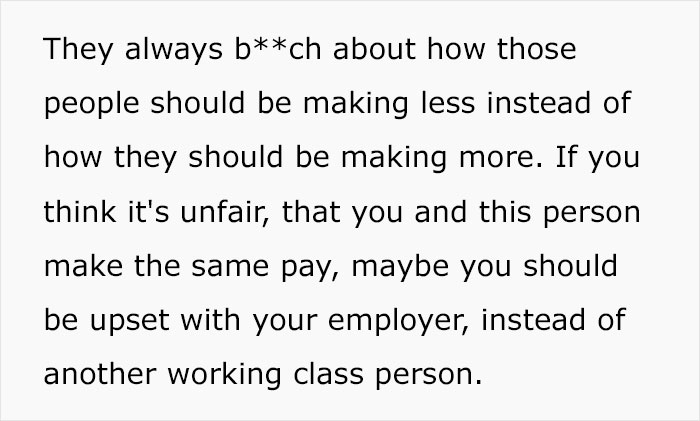 To give some perspective that the federal minimum wage isn’t livable, we can look at the data collected by the National Low Income Housing Coalition who calculated that in 2018, to get a decent 2-bedroom apartment, Americans should at least earn $22.10 without spending more than 30 percent of income on rent.

The number is a national average and it varies from state to state, but it’s clear that a lot of people aren’t paid enough to afford it. So it’s nice to learn that at least some employees pay more than they are obligated to even for a job that doesn’t require specific qualifications.

What was your reaction after seeing the video? Do you agree with Khaleah, who says that people should fight to earn more rather than being upset with others who earn more but are less qualified? Or do you think that employers should pay employees wages that are similar to what others pay in the market? Let us know in the comments!

The post Costco Worker Shares She Gets Paid Almost ‘Just To Draw Smiley Faces On Receipts’ And That Sparks A Debate Online first appeared on Bored Panda.