Creating The 3 Best Offensive NBA Superteams Of All Time 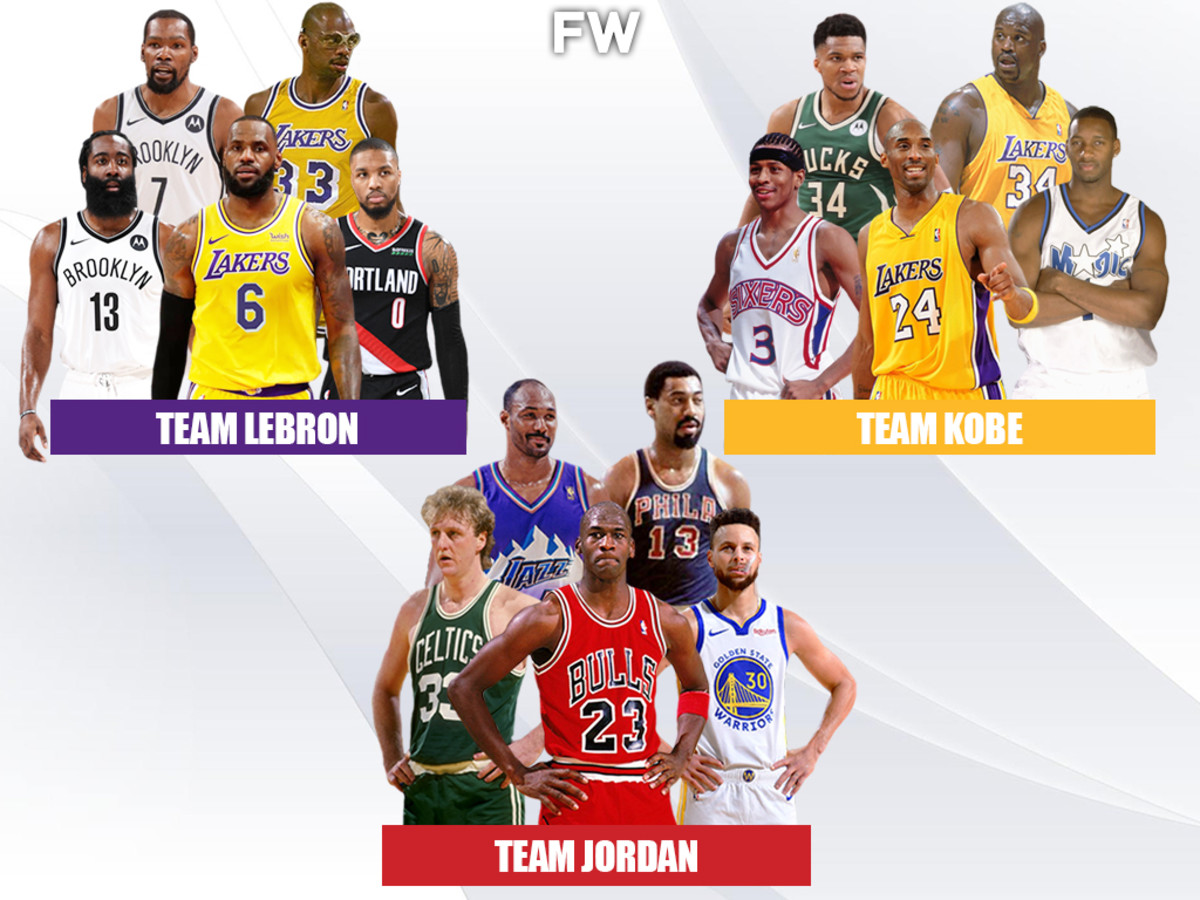 The concept of “Space Jam” is an interesting one to think about. Imagine needing to win a basketball game to save the planet. If a winner takes all the matchup, what team could save the planet Earth? Luckily, the NBA has produced so many great players that we would have options to pick from.

In order to take on another universe, we would need all the offense we could find. There are three teams, 15 players, that we can think of that would be suitable for this type of task, assuming that they were magically all put back into their primes. These three teams are the best offensive squads in NBA history, while one stands out above the rest. 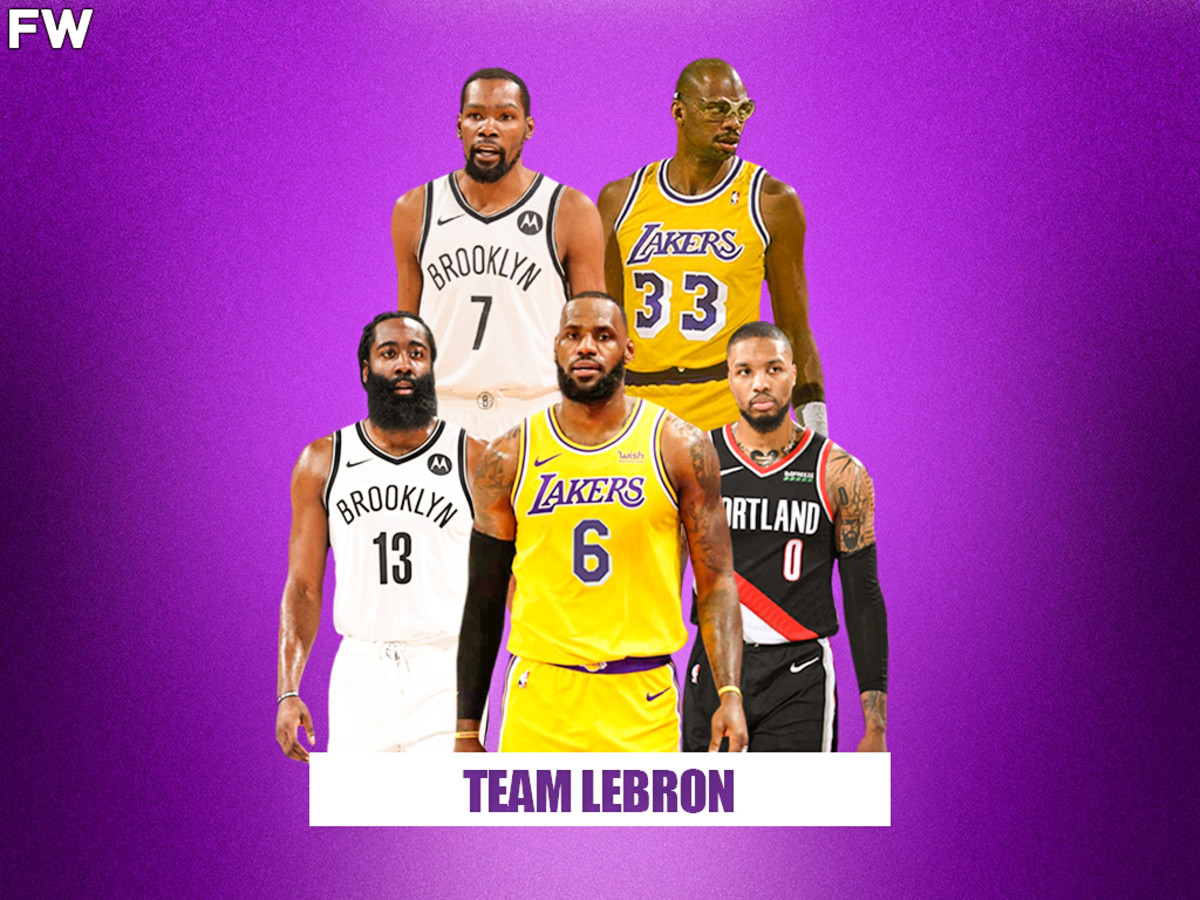 This team has more of a modern-day feel given that four players are in the NBA right now. If Kareem-Abdul-Jabbar was transformed back into his golden years, you are potentially talking about three of the best offensive players in the game. LeBron James is likely going to take down Karl Malone for second on the all-time scoring list. By the time Kevin Durant is done, he could be in the top-3 too.

Kareem leads the NBA in all-time points. His skyhook shot was unguardable at the time. He was somewhat ahead of his time too. In today’s NBA, centers are not typically the tall, strong, inside-only style of artists. They are leaner and can hit outside shots. Someone would have needed to work on his outside game in today’s world, but you would have to think that if he spent time on it, he would have been able to knock down one three-pointer each night given his vast skill set.

Even if Kareem stayed inside, you have a nightmare of a matchup between Damian Lillard and Kareem. Lillard has to unguardable range. The inside-outside catch and shoot would allow Lillard to knock down so many open three-pointers. Defenses would be forced to collapse on Kareem for his inside game, allowing Lillard and James Harden to knock down open shots.

Durant owns a pretty splash outside shooting stroke too, owning a career average of over 38%. Harden and LeBron might be two of the best players to penetrate inside. Harden is probably the better passer, but you can’t fault LeBron’s efforts today. As of recent, both players have led or been at the top, of the leaderboard of leading the league in assists.

Altogether, you have the player with the most points in NBA history and the future contender for leading the league in LeBron. You have a player like Durant that is a top scorer of all time. Harden is a triple-double machine and Lillard is a deep shooting threat. There are a lot of weapons here. 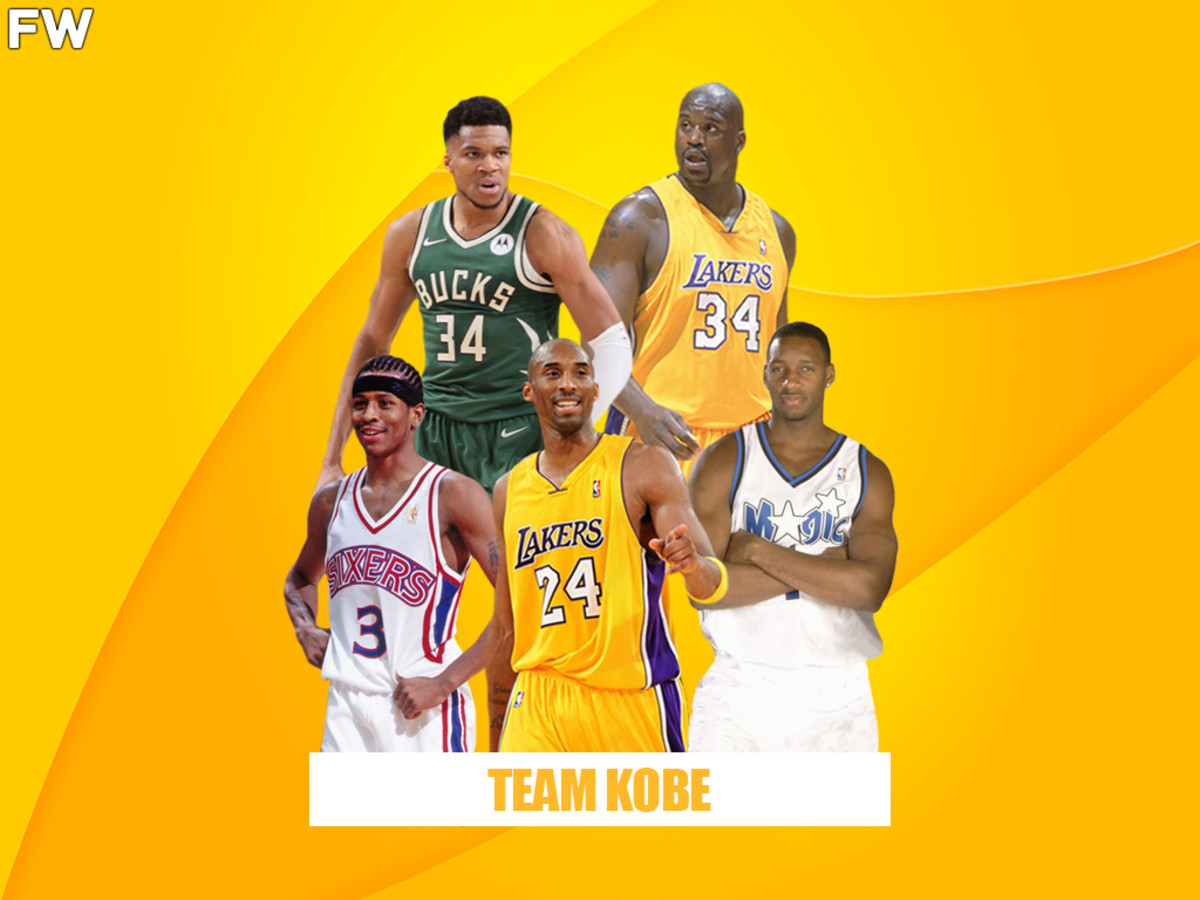 For Team Kobe, you can’t break away from the combination of Bryant and Shaq. Both players helped the Lakers win three straight Championships with the Lakers, as well as make another Finals appearance in 2004. Bryant ranks fourth all-time in points all-time, while Shaq ranks eighth all-time. The only centers that are ahead of Shaq are Kareem and Wilt Chamberlain.

Bryant ranks the most all-time in points scorers for the Lakers. Given the history of the franchise, how can you go against Bryant as a top shooting guard? Imagine if Giannis had been 10 years older. If Shaq left the Lakers, wouldn’t the next best option be Giannis Antetokounmpo? Imagine the offensive plethora that both players could have done. Having both Giannis and Shaq on the court wouldn’t just be a top option on offense, but defense as well.

Since we aren’t talking about defensive nature, the combination of Giannis and Shaq would be Twin Towers on steroids. Both are supreme inside the paint and Giannis is so versatile that he would play outside the three-point line to give Shaq full reign inside. Giannis can run the floor as a power forward. When he scored 50 points in the NBA Finals Game 6, a lot of his field goals came from him putting the ball on the floor and taking players on one on one.

What is even more intriguing about the watch would be Iverson and Giannis. You are talking about two of the best players to ever drive inside the paint, but both have a massive difference in height with Iverson standing at 6-foot-0 and Giannis at 6-foot-11. Iverson and Bryant would also have brought the top two “killer instinct” mentalities as well.

As for the shooting, Tracy McGrady and Bryant would give their team a huge advantage at midrange. McGrady and Bryant are two of the best isolation players that can create their shot. Bryant’s fadeaway shot is unguardable. It would force any team to play their best defensive stars on these two iso players.

As for a whole team report, three-point shooting is not quite there, but this offense could run the triangle. With Bryant and Shaq as their two featured players, Iverson, McGrady, and Giannis could be included. If the team wanted to run a motion offense and get people chances to attack the basket, you have Iverson, Bryant, and Giannis as options to attack the rim. Finally, the pick-and-roll opportunities with both Giannis and Shaq are also a top option as well. 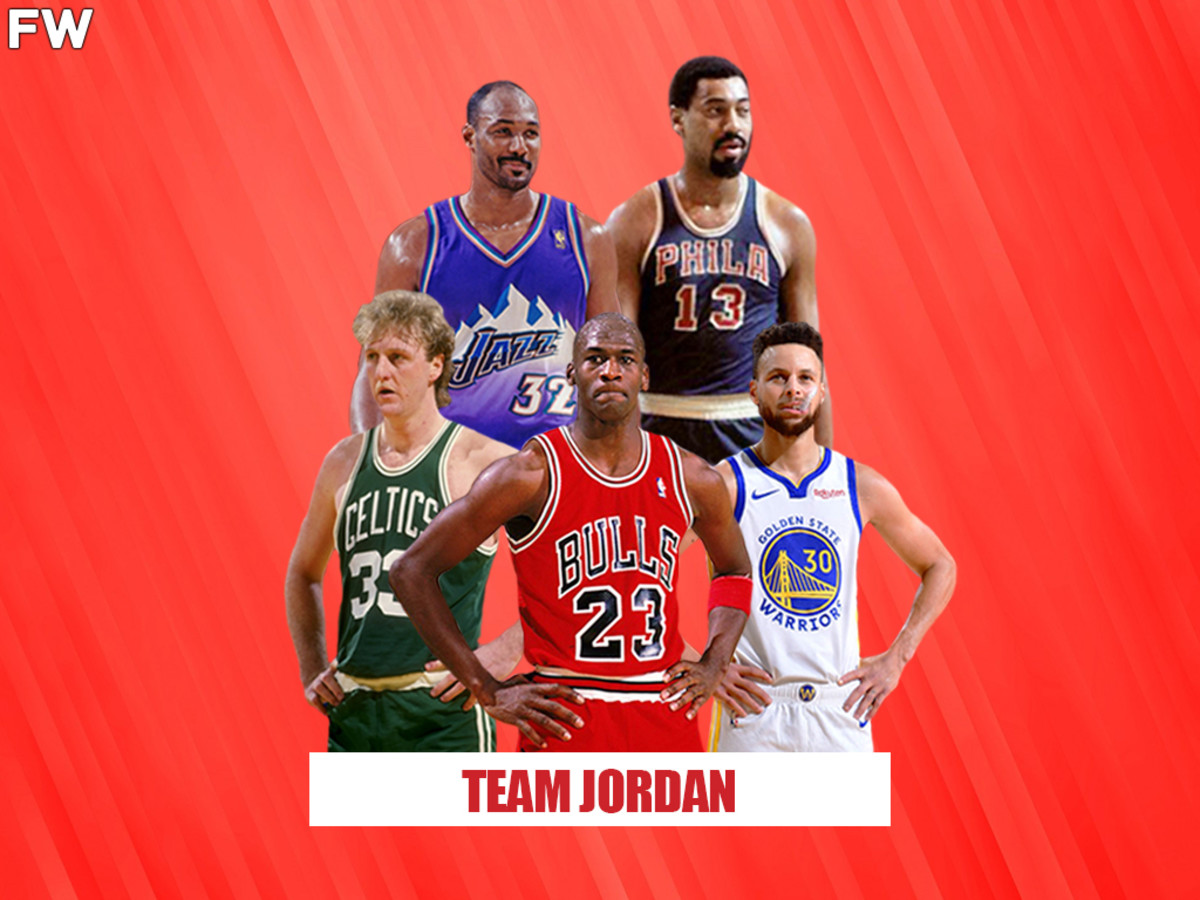 While Team Kobe has the size and Team LeBron has true potent scorers, you have three of the best shooters on Team Jordan. Jordan finished his career with 10 scoring titles. In a league full of offensive talent in today’s league, winning 10 scoring titles is probably impossible. However, Steph Curry has done it two times and just recently broke the all-time three-point record. When Reggie Miller played against Jordan back in the day, he gave Jordan some difficult games. What if Curry played on those teams instead? It’s an interesting thought, to say the least.

No matter, Jordan and Curry are two of the best combo guards in league history. While Curry is considered a point guard, he could easily play shooting guard on any team. Curry’s range is also undeniably unguardable. Jordan could shift to point guard if needed, a position where he once played some of his best basketball in his early years. This would be a matchup nightmare.

As for the third option, you have Karl Malone, who ranks second-most in all-time points. When Jordan and Malone played against each other, it was a true battle. Malone even beat out Jordan to win an MVP one year. If the two played on the same team during the 90s, there is no doubt that Jordan and Malone probably would have won every single title together.

Rounding out the team, you include Chamberlain, who owns the record for most points in a game with 100. Chamberlain ranks seventh all-time in points scored as well. When it came to centers, opposing teams could not stop him inside. Having both Chamberlain and Malone in the frontcourt would be just as hard to stop as Giannis and Shaq.

The ultimate glue guy for this team has to be Larry Bird. He was the 80s version of LeBron James. While LeBron is going to rank as a better player on the all-time GOAT rankings, Bird could score, rebound, and assist. When Bird retired, he owned a career average of 6.3 assists per game. LeBron owns a career average of 7.4, so even having a “lite” version of LeBron your team still makes your team legendary. Bird is the bridge that glues the greatest scoring backcourt of all time and a dangerous frontcourt.

The Greatest Offensive Team Is…

The answer has to be Team Jordan in the front with Team Kobe in second, and Team LeBron in third. Before the haters fly out of the woodwork, let’s explain. Would you take Lillard in a one-on-one game against Curry or Bryant? What about Jordan, Iverson, or even Jordan. On this particular list, Lillard is the “weakest link.” Then, when you look at Harden, he relies on drawing contact at the free-throw line to score a bulk of his points. Assuming the rules are the same as today’s rules, that takes away a major part of his game. LeBron, Durant, and Kareem would keep the team in games, but we are looking at a complete squad.

Next, Team Kobe has some serious flaws in their three-point shooting. Shaq took 22 three-point attempts in his entire NBA career. Giannis owns a career average of 28.7%, Iverson at 31.3%, Bryant at 32.9%, and McGrady at 33.8%. You have a team that relies on too many baskets inside the arc. If the team tightens up on defense and forces this to be a shootout, there is one team that could beat them.

Team Jordan has the outlier. Having Curry separates them from everyone else for this reason. Jordan is going to get 30 points no matter what. That could be canceled out by another star like LeBron, Kobe, or Shaq, but what will the supporting cast do to separate themselves. Chamberlain could go toe to toe with Kareem and Shaq, so that cancels out that matchup. Malone could also go toe to toe with either Malone or Durant. When you look at difference-making players, Curry’s ability to shoot from anywhere at a high clip puts this team over the edge.

Critics may call out Lillard, Harden, Durant, and even Bryant as players that could match Curry’s shooting, but Curry has been outshooting these players even today. Curry has won MVPs over each one of those players listed and could win another MVP over Lillard, Harden, and Durant this season. Curry’s three-point shooting changed the game. That is not speculation. That is a fact.

When it comes to offense, you have a variety of choices to pick a shot. You can get inside, shoot a midrange, or shoot from outside. Consistently, Team Jordan has all of the pieces to do that. If the world needed to be saved, this would be the team in their prime that could save us all.

All-Time Lakers Starting 5 vs. All-Time Celtics Starting 5: Who Would Win The Duel Of The Biggest NBA Rivals

The Leading Scorers For Every NBA Team: Kobe, Jordan And LeBron Lead Their Franchises

10 Best NBA Players Who Wore No. 34: Shaq, Hakeem, Giannis And Barkley Have Dominated Wearing That Number 5 Best Destinations For James Harden This...