Have you ever watched a Hollywood movie or TV series and caught yourself paying attention to the beautiful architectural styles of the characters’ houses rather than the plot? I have. Which is why I was so happy to find out that American Home Shield has decided to look back at the evolution of the American house for their 50th anniversary.

Turns out, many elements of American home design have stayed the same over the last 450 years. Talk about long-standing traditions, right? In the images below, you can see renders that American Home Shield has created to document the history of the American home. 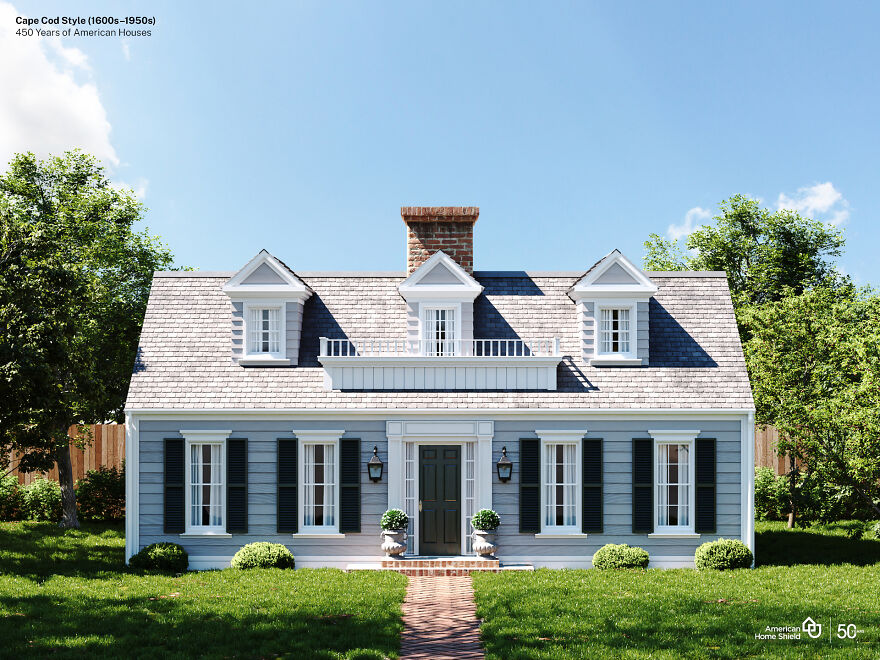 “The first Cape Cod style homes were built by Puritan colonists who came to America in the late 17th century. They modeled their homes after the half-timbered houses of their English homeland, but adapted the style to the stormy New England weather. Over a few generations, a modest, one- to one-and-a-half-story house with wooden shutters emerged. Reverend Timothy Dwight, a president of Yale University in Connecticut, recognized these houses as he traveled throughout the Massachusetts coastline, where Cape Cod juts out into the Atlantic Ocean. In an 1800 book describing his travels, Dwight is credited with coining the term “Cape Cod” to describe this prolific class or type of colonial architecture.” (source)

“Although Victorian styles eclipsed the plain Cape, these houses came back, in greater numbers than ever, during the Colonial Revival of the 1930s, often larger than the originals and with different framing methods, interior plans, staircases, and details. Owing to the romantic associations of 18th century models and the ubiquity of 20th century Capes, this is arguably the most recognized house style in America.” (source) 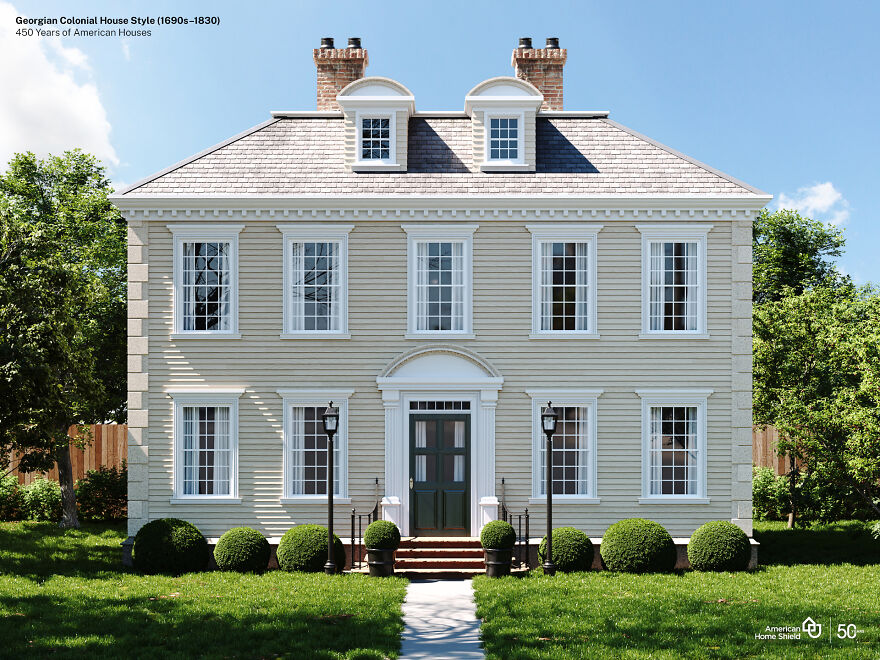 The first high-style examples are in the South, built usually by affluent tobacco planters. Grand examples—of wood rather than brick as in Virginia—became more common in the North only after 1750.” (source) 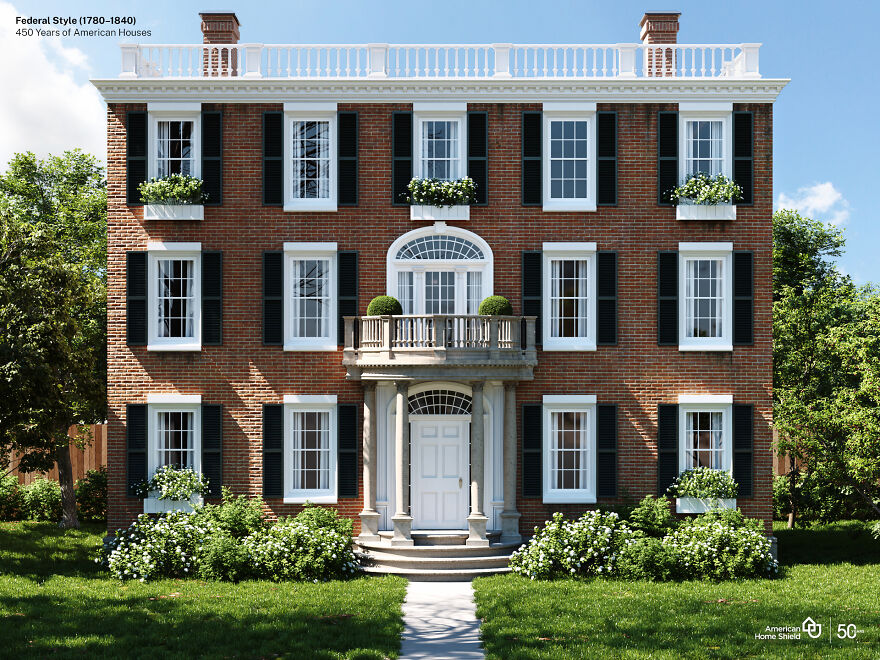 “After the Revolution, Americans wanted cultural as well as political independence, and they began to change the style of their buildings to reflect their change of allegiance. While the houses were not radically different—and still drew upon British sources—the high-style buildings of the new era bore a new and American name.

The Federalist party which, ironically, tended to favor British interests in foreign affairs, was the party of the merchants and landowners. These were the people with the means to build important houses—houses that came to be known as having been built in the Federal Style. The name “Federal” is a catch-all for buildings that date from the close of the Revolution (1783) until the first great machine-age style, the Greek Revival, became popular in the 1820s and 1830s. Other terms used for buildings of the Federal decades are Adamesque and Neo-Classical.” (source) 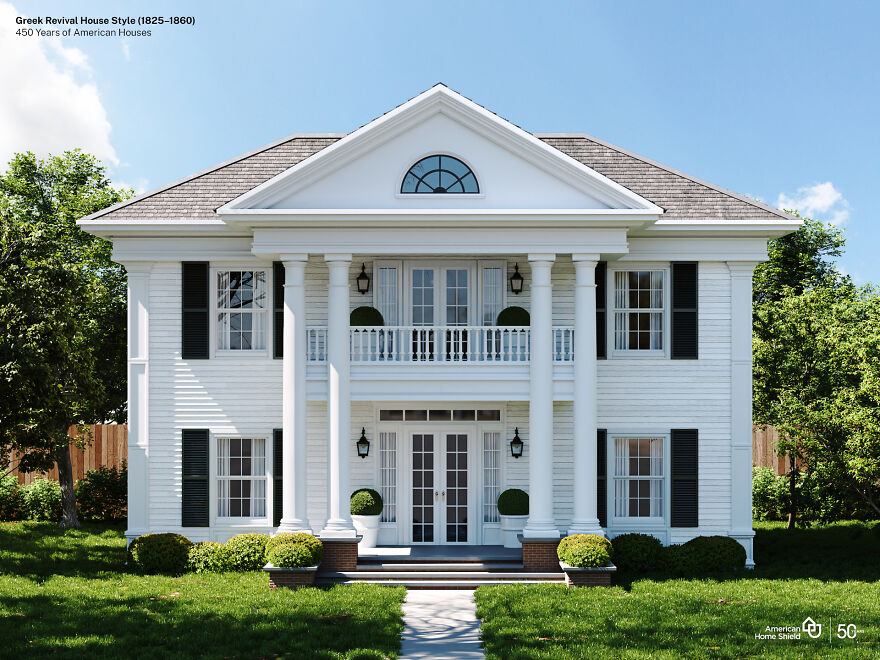 “British architect James “Athenian” Stuart is said to have been the first to introduce Greek Revival to Britain, but it was in America that Greek Revival would fully bloom. As a new democracy, 19th-century Americans were inspired by the birthplace of democracy and by Greek culture, art, and philosophy and all of the symbolism and meaning that it held for a nation in the midst of defining itself. Americans began to reject the Federal style with its British influences and sought an American style with bona fide democratic roots. The Greek War of Independence (1821-1832) was another galvanizing force encouraging Americans to embrace the values of a country that had created democracy and was fighting for its independence from the Ottoman Empire.” (source)

“In Greece, temples were built of marble painted in primary colors. But by the time they were discovered by Europeans in the eighteenth century, the paint was long gone, leaving the white marble. And to this day, people associate the Greek Revival with the color white – the white columned look.” (source) 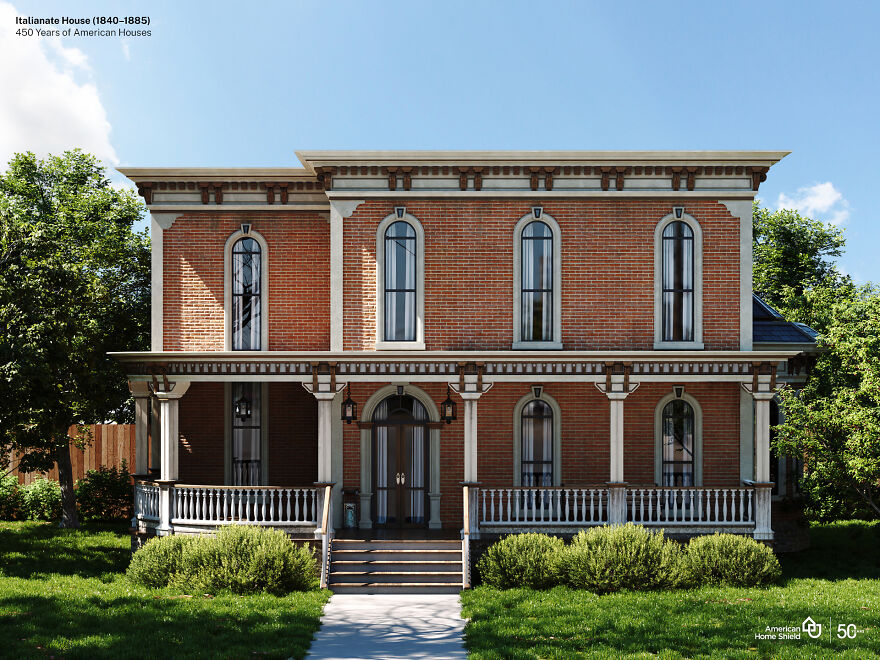 “The style derived from Italy’s rambling farmhouses, usually built of masonry, with their characteristic square towers and informal detailing. By the 1830s, Italianate had spread to the United States, where architects began to transform it into something truly American with only hints of its Italian origin. Thus, working in this style, architects had a higher degree of artistic freedom than they had in earlier, more rigid styles.” (source)

“The Italianate style was popularized in the United States by Alexander Jackson Davis in the 1840s as an alternative to Gothic or Greek Revival styles. Davis’ design for Blandwood is the oldest surviving example of Italianate architecture in the United States, constructed in 1844 as the residence of North Carolina Governor John Motley Morehead.” (source) 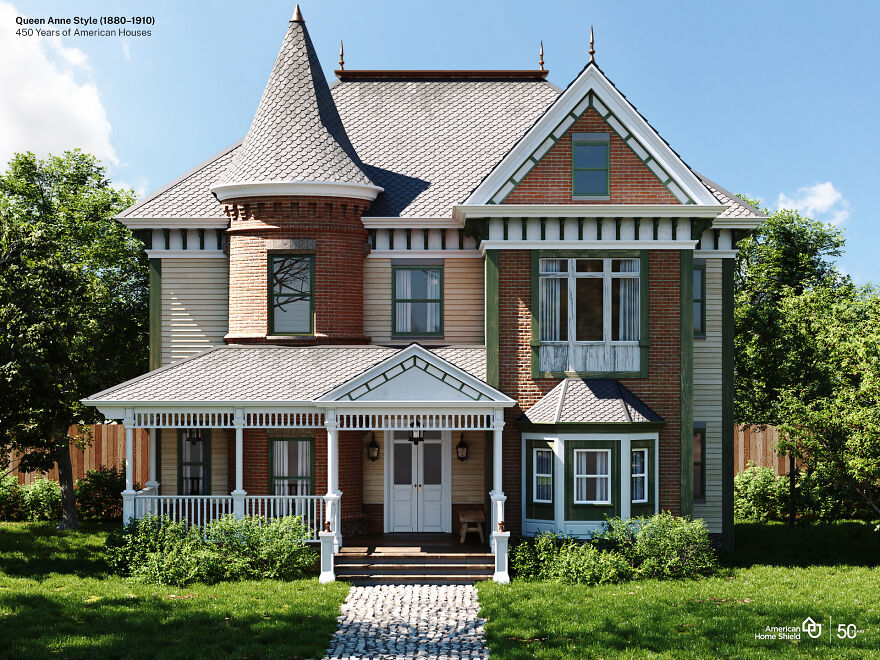 “The Queen Anne style represented the culmination of the picturesque, or romantic movement of the 19th century. Based on a premise of “decorative excess” and variety, there was little attempt to stay true to any one particular style or historical detailing. Rather, the style displayed a combination of various forms and stylistic features borrowed from the earlier parts of the Victorian and Romantic eras. “Queen Anne” is somewhat misleading given her much earlier reign (1702-1714) during times when Renaissance-inspired architecture was the norm.

The last two decades of the nineteenth century saw Queen Anne become the most dominant residential style in the U.S., heavily favored by the Victorian elite who had become wealthy from industrial growth. Middle- and working-class families often enjoyed their own versions, however, in the form of smaller, L-shaped cottages or other “folk” variants decorated with some of the style’s typical trim or siding varieties.” (source) 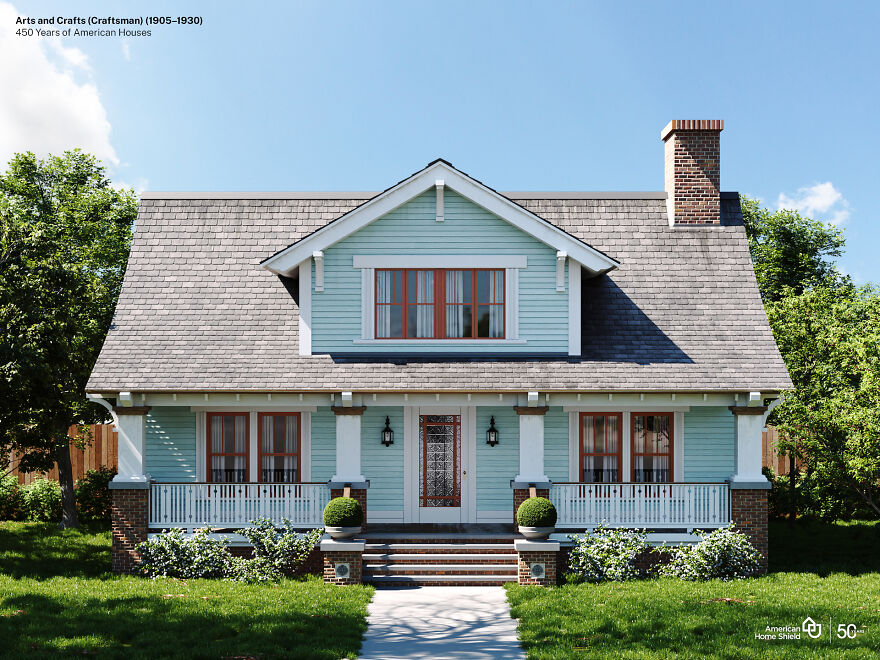 “As a reaction to the manufactured and ornate styles of the Victorian age, Arts and Crafts-style homes embraced handcrafted design and approachable materials. The style originated in Great Britain in the mid-19th century and came to America around the beginning of the 20th century. The term “Arts and Crafts” refers to a broader social movement that encompasses not just architecture, but also interior design, textiles, fine art, and more.

The design movement began as a revolt against the opulence of the Industrial Revolution, where design could be needlessly overdone. Arts and Crafts instead focused on the opposite–instead of mass-produced and uninspired, the movement was all about being handcrafted and personal. The idea was that if quality could replace quantity, good design and good taste would prevail.

The Arts and Crafts movement was directly tied to the rise of Craftsman and Bungalow-style homes, architecture that played off of the same mentality of simple but thoughtful structures. Bungalows were intended to give working-class families the ability to own a well-designed home that was easy to maintain and manage.” (source) 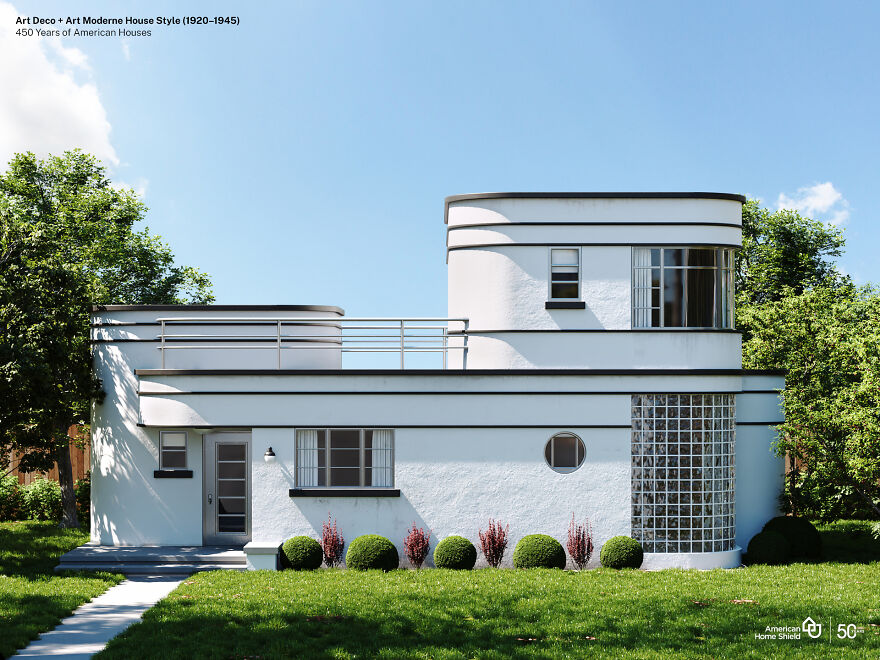 “Art Deco was the first widely popular style in U.S. to break with revivalist tradition represented by Beaux-Arts and period houses. Art Deco uses a style of decoration that was applied to jewelry, clothing, furniture, handicrafts, and – in this case – buildings. Industrial designers used art deco motifs to decorate streamlined cars, trains, kitchen appliances, and many other machine-age innovations. Art Deco takes its name from the Exposition Internationale des Arts Decoratifs and Industriels Modernes, held in Paris 1925.” (source)

“The Art Deco style first gained public attention in 1922 in a design competition for the Chicago Tribune Headquarters. Finnish architect Eliel Saarinen submitted an Art Deco design that was not chosen, but was widely publicized and embraced as an exciting new architectural style.” (source) 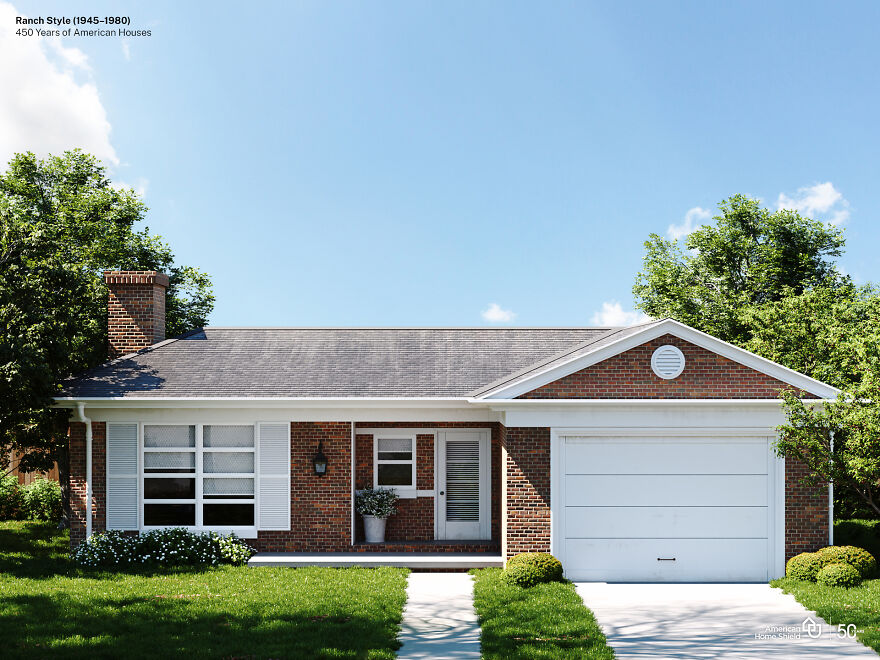 “True ranch-style homes first made their appearance in the 1920s. Originally, they were based on Spanish colonial architecture used in the American Southwest. Efforts to combine that style with modern architectural touches created the California ranch-style home. That led to a boom in the building of these homes from the 1940s through the 1970s. Their livability, flexibility in floor plans and uncomplicated design were perfect for the post-World War II growth of American suburbs.” (source)

“A small number of architects working in California and the Southwest during the 1920s and ’30s designed the first suburban ranch-style houses. These were based on the simple, one-story houses built by ranchers who lived in the harsh climate of the plains and mountains of the West. For young architects seeking forms that were defined by their function and not layers of Victorian bric-a-brac or the Colonial-style treatments popular in the East, the ranchers’ houses had particular appeal.” (source) 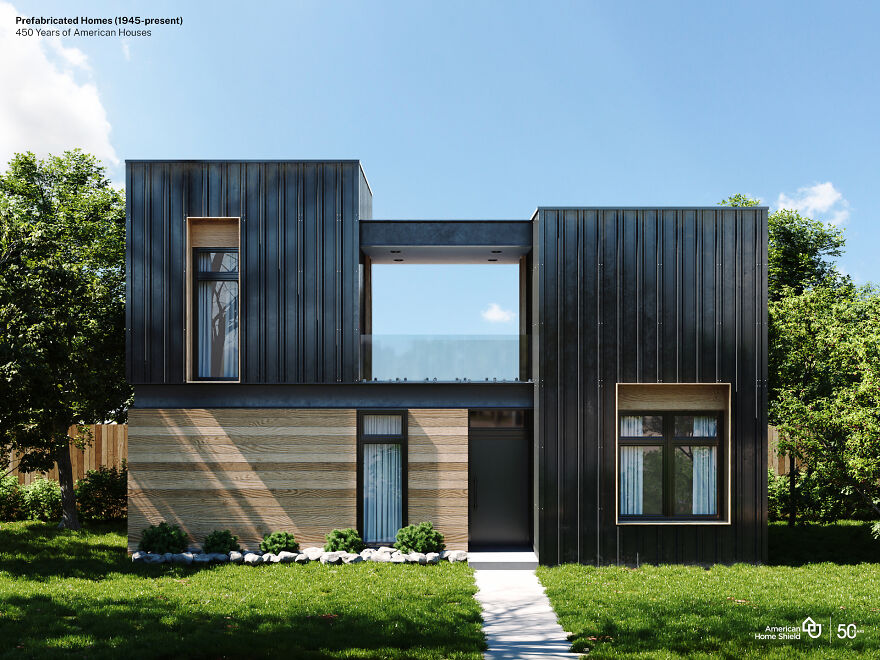 “Prefabrication is a method of producing standardised components off-site in a factory or workshop, that can be fitted together on-site. The components can be shipped flat packed or partially assembled and are not subject to fluctuating weather conditions when they are manufactured. Prefabrication was a solution where there were no suitable local materials, for example in the former colonies, where buildings had to be erected quickly or where there were skills and materials shortages.” (source)

“After the development of the assembly line by Henry Ford in 1913, it became even easier to manufacture modular homes at a price that was affordable to many more consumers. And after World War II, when the US faced a housing crisis as soldiers returned home and started families, modular construction offered quick, low-cost housing options to house a new generation of Americans. From the beginning, modular buildings have provided innovative and affordable solutions.” (source)

The post Designers Visualize The Same House In 10 Different Styles To Show The American Home Throughout The Last Five Centuries first appeared on Bored Panda.

Alec Baldwin Says Wife Hilaria Has Given Him ‘A...