There are not many absolutely useful and 100% effective rules in this world that will help you in a difficult situation. For example, you should not split up when you are walking in a group through a dark abandoned building, you should not go swimming together at night on the beach on a mysterious island, you should not remove Patrick Mahomes from your fantasy football team, and you should definitely always require written confirmation when your boss wants you to do something that looks like it’s not entirely legal.

The last rule is perhaps the most wholesome, especially if you work as a middle manager and something in the company depends on your decision. The fact is that management is often prone to adventurous acts, and if the case does not work out, the bosses will definitely need a scapegoat. And in this case, there is a high probability that you will become one…

The best example of such a situation is this recent post by user u/Jamespg614 in the Malicious Compliance Reddit community, which has already garnered over 17.5K upvotes and nearly 600 different comments. The author of this story strictly followed the last rule, and it really helped them at least keep their job. However, let’s talk about everything in order… 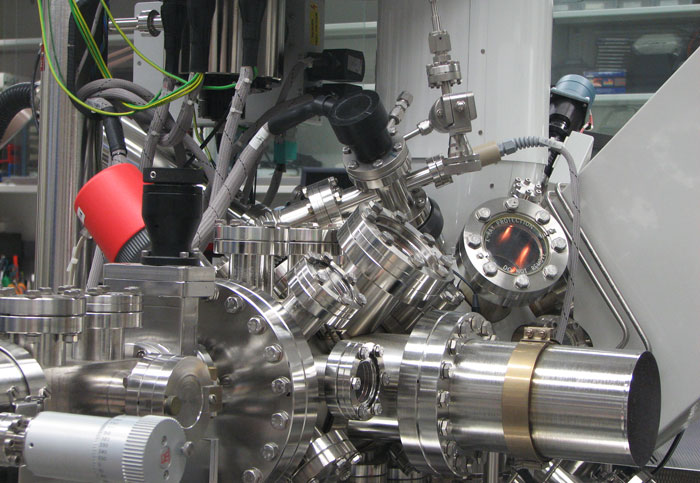 So, the author of the post says that for many years they had been working in a large company as a spare parts estimator for a fairly niche industry. As the Original Poster says, their job is to evaluate which of the spare parts for the products their company makes will be needed to complete the order, and then generate a quote for the contractor. 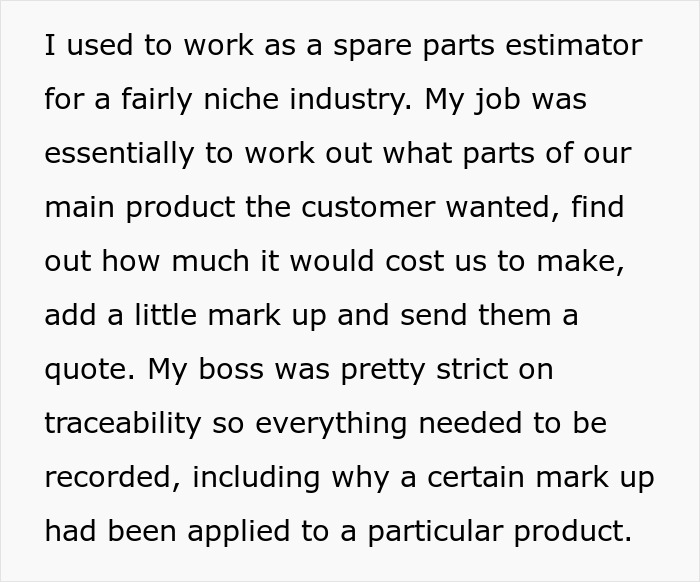 The OP admits that their boss was quite picky about traceability. That is why all transactions had to be recorded and documented: the rule that the author of the post always followed steadily for all the years of work in this company. A rule that, as we said, once saved their job. 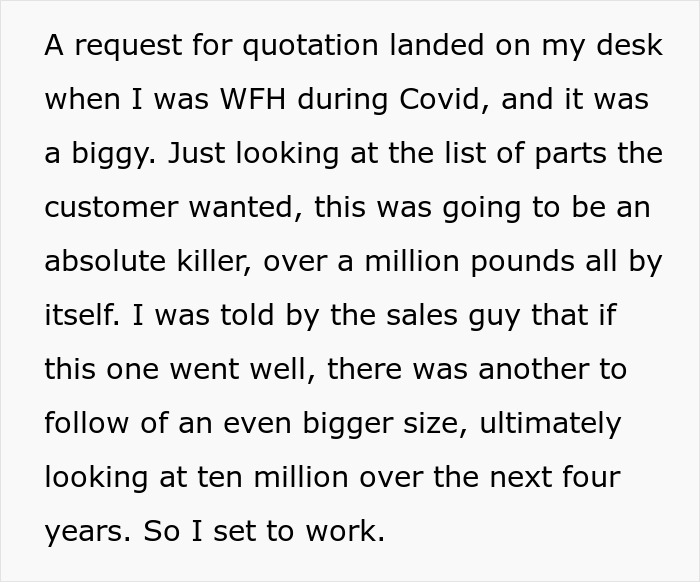 It all started on the day when the company was approached about a big order. Well, a very big one, actually. With just a glance at the list of parts that the customer required, the OP realized that the amount would be in the range of over a million pounds. Moreover, as the sales guy said, if this order went well, another one would follow, and more, adding up to ten million over the next four years. 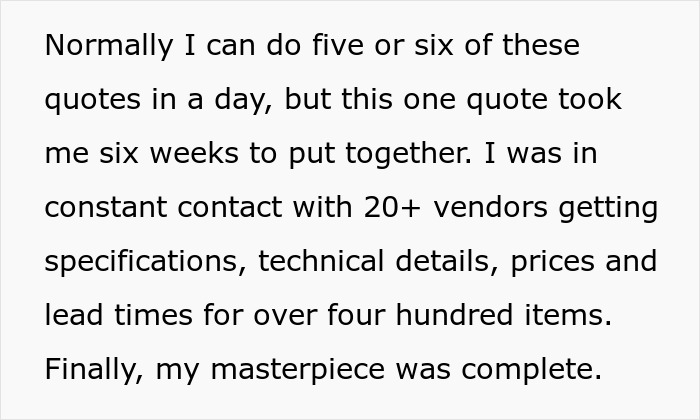 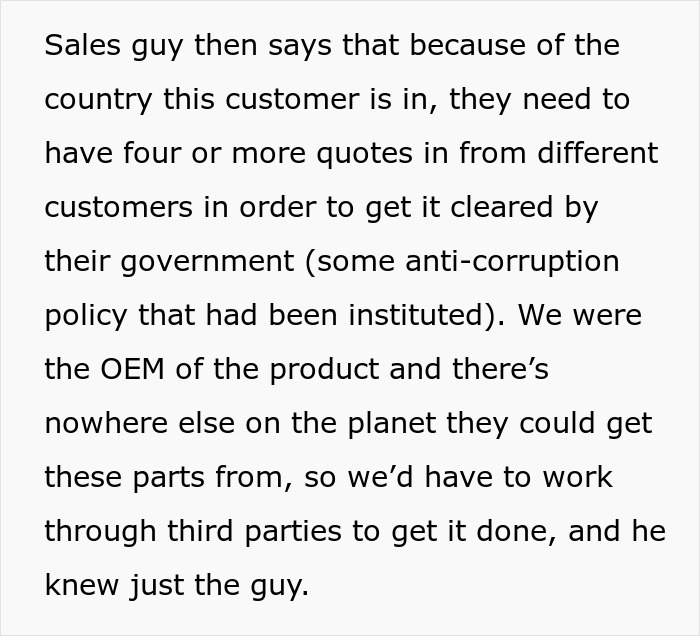 As the OP says, they usually manage to make from five to six quotes per day, but this particular order required special accuracy and scrupulousness. The author of the post contacted more than 20 vendors in different countries, calculated technical details, received specifications, and determined the best prices for more than four hundred various items. Finally, after six weeks, the quote was ready, and the OP, without false modesty, calls it a masterpiece. 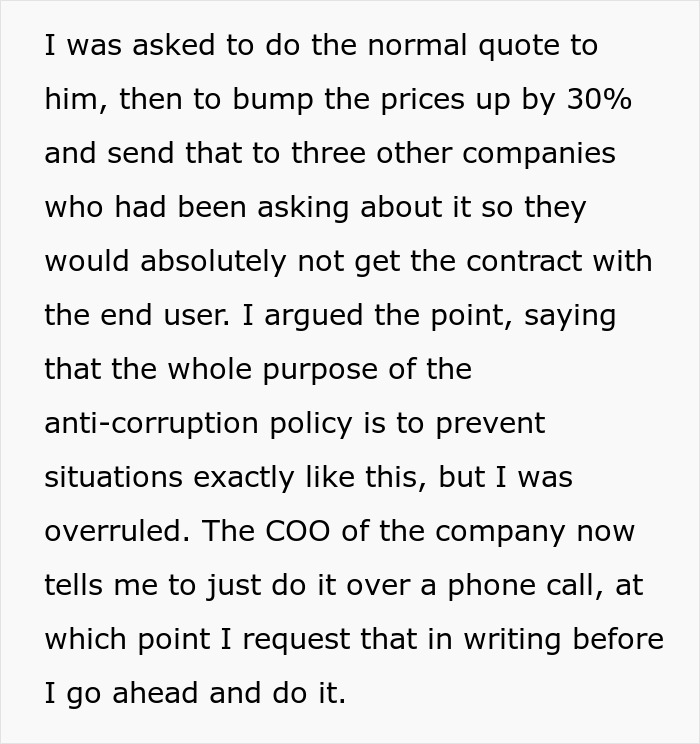 To definitely win a tender, the customer asked to hand their competitors the same quote but with a +30% price increase

And then it turned out that everything was not at all as simple as the OP thought. According to the sales guy, the country where the customer was located had some anti-corruption laws that required at least four different companies to participate in the tender. So given that the company where the OP worked was an OEM, they had to work through third parties to get it done. 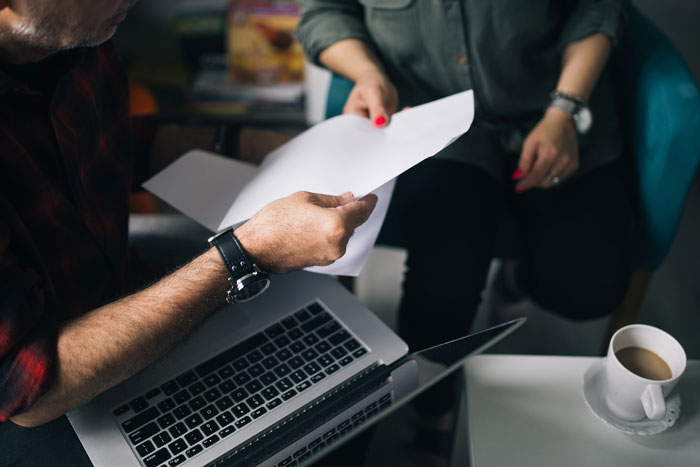 The sales guy contacted a representative of one of the companies participating in the upcoming tender, who proposed a cunning plan. His firm, according to the plan, would receive the original quote with the OP’s initial calculations, and the other three competitors would receive quotes with 30% over price, so that the winner would literally be known in advance. In response to the OP’s reasonable objection that anti-corruption legislation is introduced precisely to avoid such cases, the COO directly ordered that this just be done. 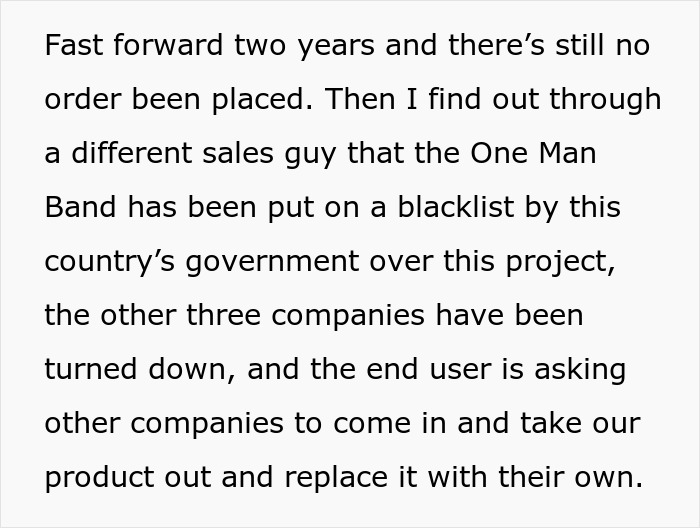 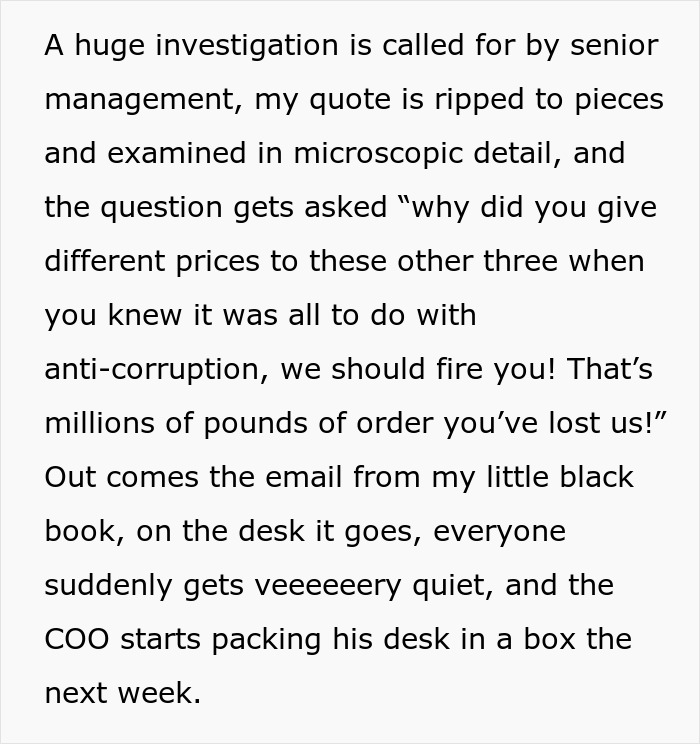 This was all happening during the COVID-19 pandemic, so the OP was working from home. In order to avoid possible problems in the future, they asked the COO to send them an email with a written order to proceed according to the plan described above. And only after receiving this very email, the author of the post began to act. Several years passed, a tender took place – but the order was never received by the OP’s company. 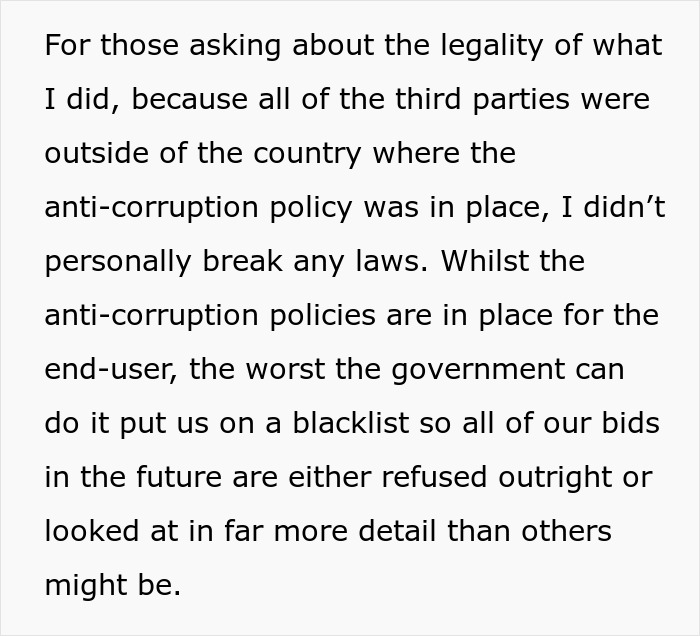 And then thunder struck… As a result, it turned out that the initiator of that cunning plan has been put on a blacklist by this country’s government over this project, the other three companies had been turned down, and the end user was asking other companies to come in and take the OP’s product out and replace it with their own. Of course, the top management initiated a large-scale investigation, as a result of which the same quote, made up by the OP two years ago, came to light. 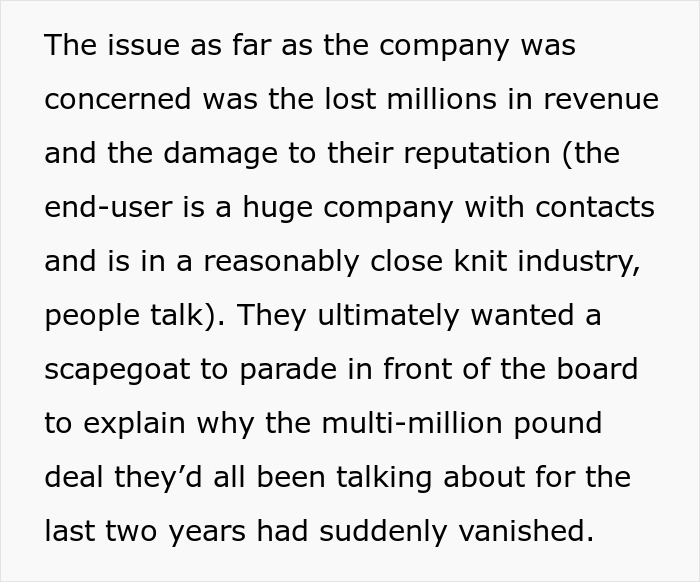 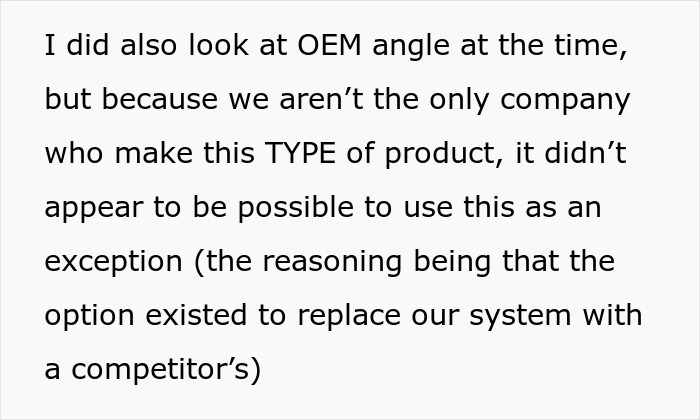 During the board meeting the author got blamed for this failure yet cleared themselves showing that very email, getting the COO fired instead

During the meeting of the board of directors, the OP was directly accused of disrupting a large-scale order, multimillion-pound losses, and put on the verge of dismissal. And this is where the author’s foresight came in handy – they simply showed the higher-ups that very email from the COO, and now it was the boss who went to collect his things in a box! The moral of the story, as the OP themselves says, is if someone tells you to do something borderline illegal, make sure to get it in writing. 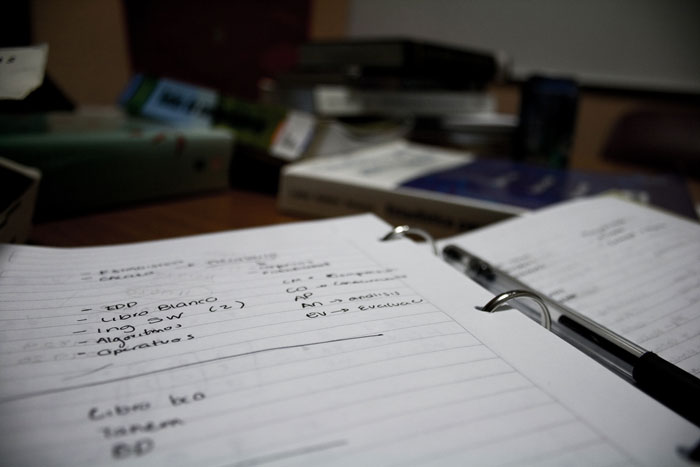 Moreover, as it turned out in the comments under the original post, its author turned out to be even more prudent than expected – since often work emails are deleted after a certain time by the company’s deletion policy, they just downloaded that email onto a personal USB drive that they kept just for such occasions. By the OP’s own admission, given the other contents of that USB drive, though, the company never thought to go after them for it. 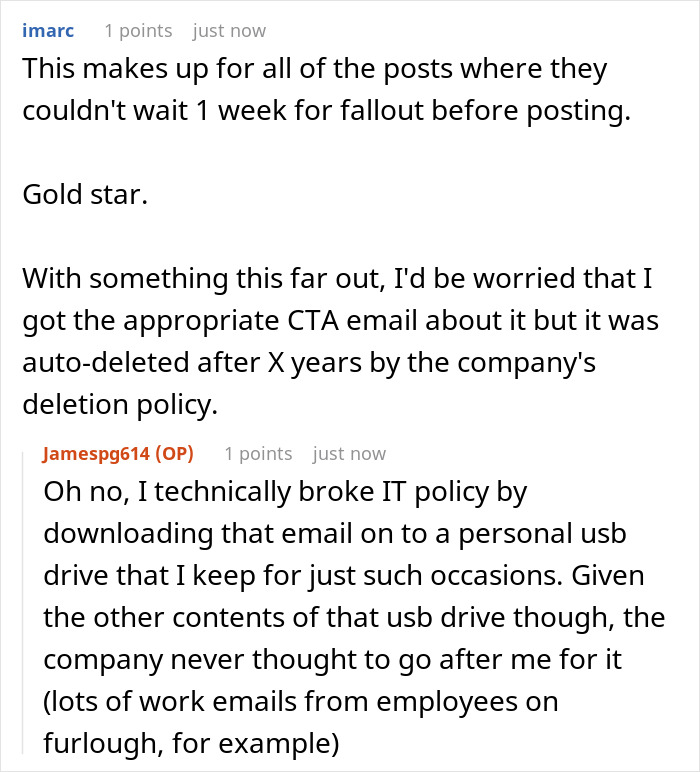 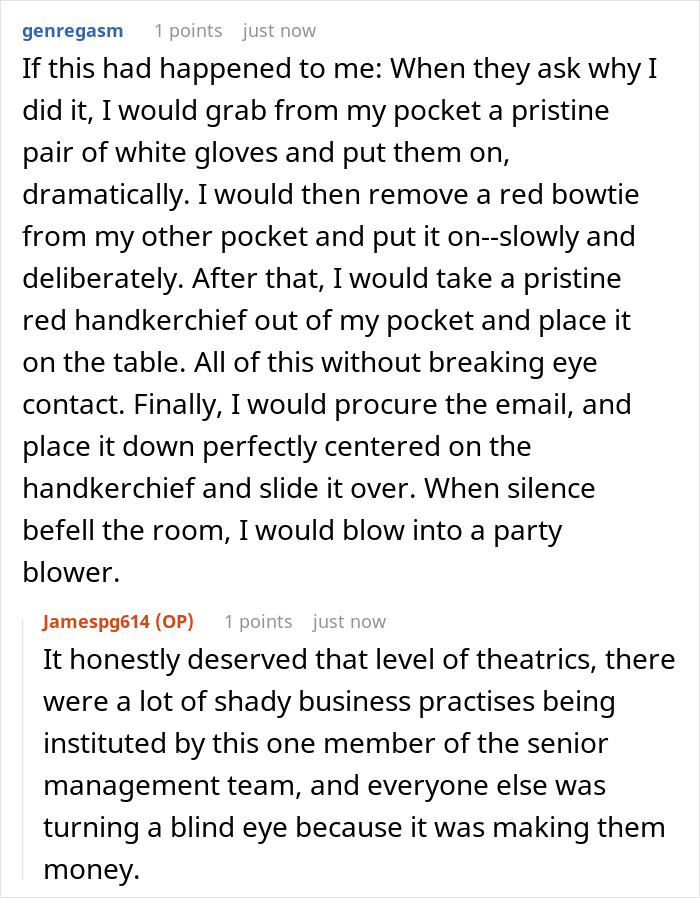 Most commenters, of course, praised the author of the initial post for such foresight, while wondering when managers will learn that if they are asked to put it in writing, they need to step back and rethink the whole idea. As for the decision made by the original poster, people in the comments suppose that it’s just a healthy reminder for every professional out there. 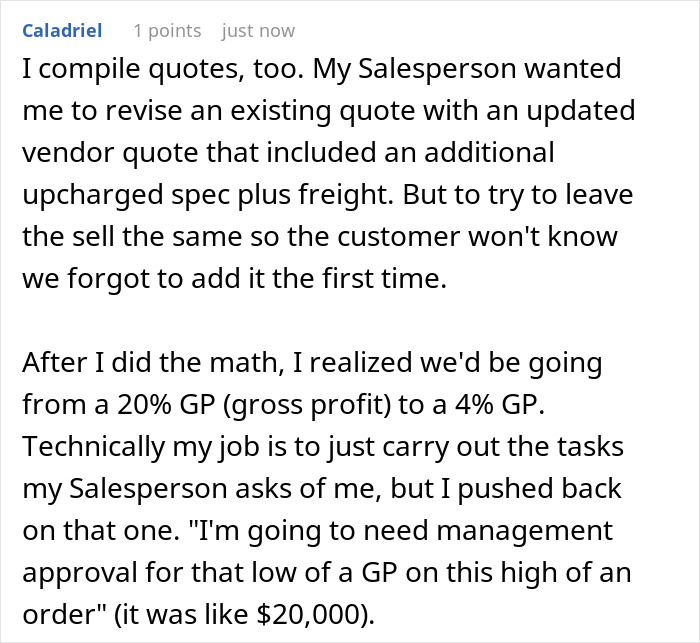 We’re pretty sure you already have a constructive opinion on this story, so just feel free to write it down in the comments below. And if you have ever faced or witnessed a similar case as well, then we’re definitely looking forward to your own great tale.

The post Employee Saves Themselves From Legal Trouble By Showing An Email They Asked For From The COO Before Starting To Follow His Orders first appeared on Bored Panda.