Technical difficulties occurred during Giveon’s BET Award performance. The singer is blaming the network for purposely sabotaging his microphone. 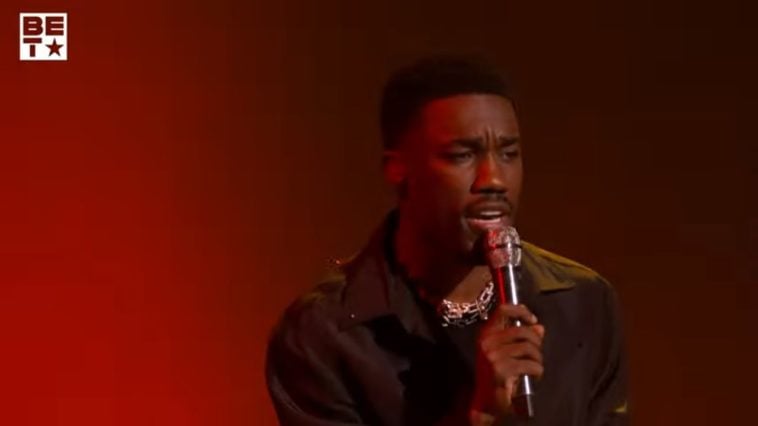 Singer-songwriter Giveon is blaming technical issues for an off-key performance at the 2022 BET Awards.

Having the honor of closing out the successful award show. The “Heartbreak Anniversary” singer’s voice stole the show, but for reasons, fans would not expect. Viewers at home watching the show noticed he was shockingly singing off-key as he gestured that he couldn’t hear himself while looking at his microphone.

The “Like I Want You” artist switched microphones during his live performance, and regardless of him claiming that the mic was to blame, social media disagreed. Fans chimed in on Twitter to talk about the issue; one fan created a parody account of the mic to poke fun at the performance, saying:

“Giveon heard his OWN singing and said “what the hell”

The LA singer has yet to respond to claims from social media.

Just before the 2022 BET Awards air this weekend, Lil Nas X alongside NBA YoungBoy released the video for the song “Late To Da Party,” sending shots aimed at BET Networks.

Lil Nas X and NBA Youngboy dropped the official music video for their song “Late To Da Party,” a diss track to BET networks over feeling snubbed for nominations at this weekend’s awards show.

The video starts with Lil Nas X traveling on the plane before landing to pick up YoungBoy. The artists are spotted driving around the city together and crashing the BET awards ceremony.