There is an opinion that in order to teach others, it is not at all necessary to be an excellent expert yourself. Indeed, many outstanding sports coaches never succeeded as players, and some brilliant scientists were in fact the poorest students.

But what about parenthood? Is it necessary to be a parent yourself in order to give advice and recommendations on raising a child? This is where people’s opinions diverge radically. On the one hand, no one understands what parenthood is until they raise their own child. On the other hand, a fresh look from the outside has never bothered anyone.

Well, sometimes it does. For example, it did for the author of this post in the AITA Reddit community, which has amassed around 5.1K upvotes and over 800 various comments: comments, where opinions, as we said before, were also divided. However, most people in the comments still supported the Original Poster.

The Original Poster has a 4-Y.O. son and his sister regularly bothers him with parenting advice 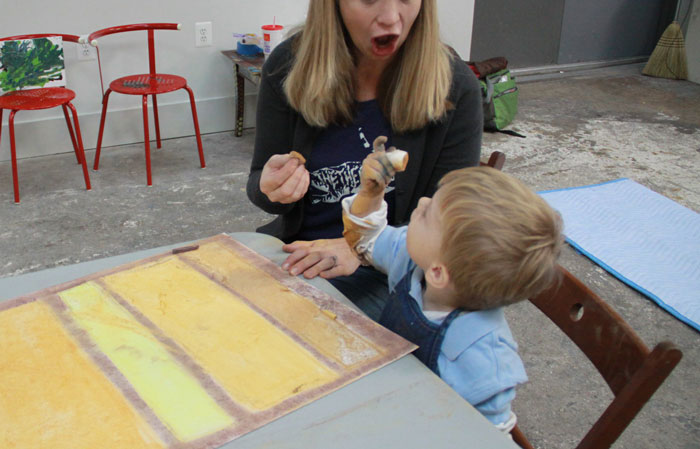 So, the Original Poster and his wife have a four-year-old son, who, as the father himself admits, is very shy and rarely talks to people outside his parents. The kid is also very picky and does not eat anything he doesn’t find comfortable. As the OP says, sometimes it’s tricky, but that’s being a parent. 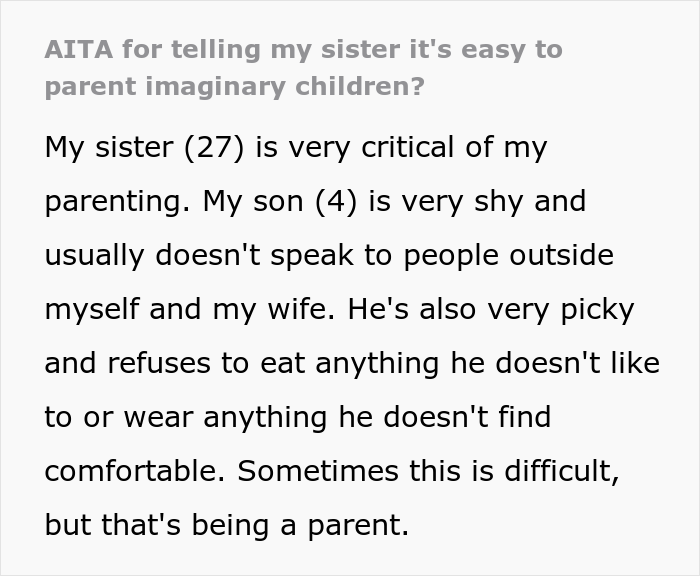 The OP also has a sister who constantly picks on his parenting methods. We must say that the woman herself does not have children, but she regularly gives her brother whole lectures on parenting, both requested and not. This has often annoyed the OP very much, but he still tried to endure. 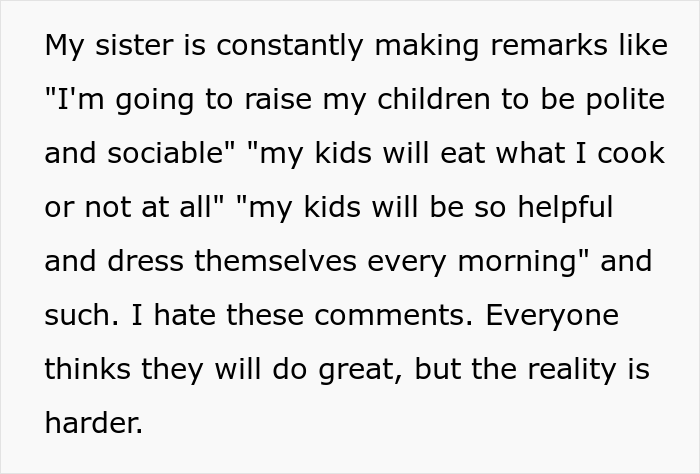 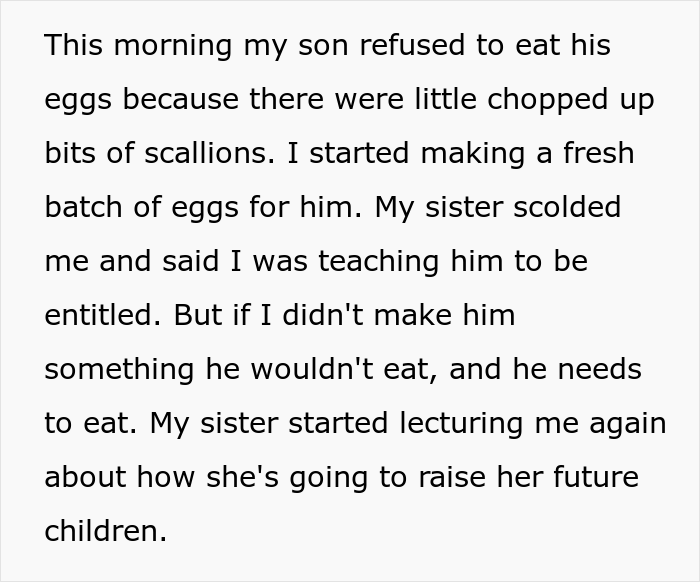 The OP admits that he literally hates these comments. After all, it is one thing to say what you think you will have, and quite another to face reality. The OP’s sister was going to get married, but the man she expected to propose suddenly broke up with her, so she doesn’t have her own family and children yet. 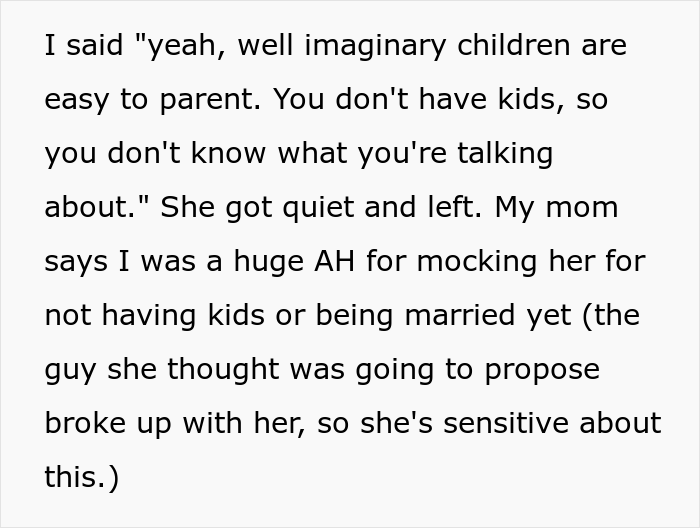 One day the OP’s son refused to eat eggs with scallions and the dad made him another batch, without greens

So one beautiful day, brother and sister went to visit their mom, and the OP took his son with him. Mom cooked them eggs with little chopped up bits of scallions, a dish that they loved very much as children. The grandson, however, unlike his dad, refused to eat the eggs, because the scallions, in the boy’s own words, burned his mouth. 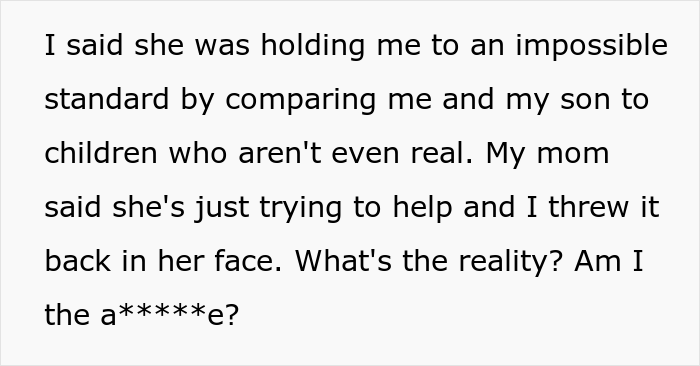 The dad just got up and decided to make a new batch of eggs. To this, the sister immediately objected that he was spoiling the child and teaching him to be entitled. On the other hand, the man understood perfectly well that if he did not feed his son now, he would not eat at all, but he needed to eat. And then the sister once more began to talk about how she would raise her future children… 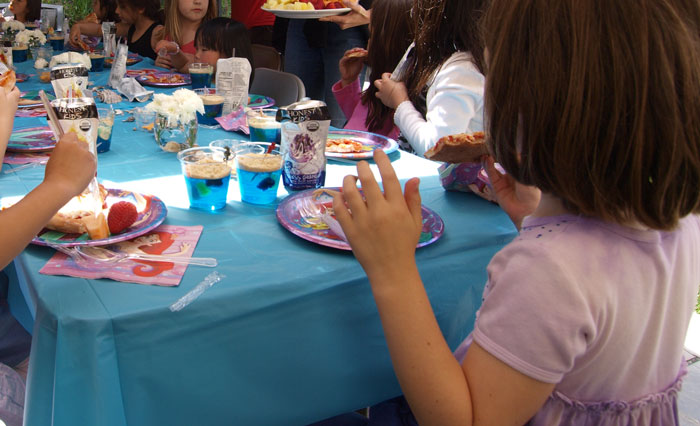 The sister told the OP that he allegedly spoils his son, so the man just answered that it’s easy to raise imaginary children

The OP was outraged and stated that it is actually very easy to raise imaginary children, and the sister does not have kids of her own, so she has no idea what she’s talking about. The sister fell silent and left, and the mother later called the OP a jerk for offending her, putting pressure on her “pain point” and forcing her to remember that she did not have her own family.

However, the man was indignant, arguing that it was unfair for his sister to compare himself and his son with non-existent children. To this, his mother told him that the woman was just trying to help, and he simply threw it back in her face.

The OP’s mother scolded him for being rude yet most people in the comments, however, backed the man

People in the comments, unlike the mother herself, mostly supported the OP, agreeing that imaginary children are in fact easy to raise. In addition, according to some commenters, rigid parenting actually only harms children – especially if the kid has ASD, because the texture of food is fundamentally important for such children. 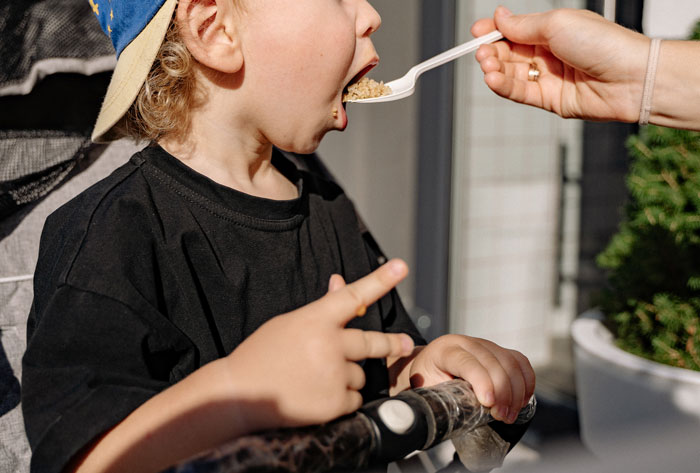 Moreover, according to some commenters, even if the OP’s son does not have any health problems, his palette of tastes will develop with age. It’s very easy, according to people in the comments, to say “I’ll do this and that” with kids, but people often forget that children have their own opinions. And this opinion may not coincide with the parents’ point of view.

In fact, parenting is both a great happiness and a heavy burden, and, for example, this post of ours is probably a good confirmation of this fact. In any case, we’re sure you’ve already made up your mind about this particular story, so comments under the post are, as always, highly appreciated.

The post Guy Asks Whether He Did The Wrong Thing By Telling Off His Child-Free Sister As He's Fed Up With Her Parenting Ideas first appeared on Bored Panda. Bird species are in decline everywhere - but in...