“I Turned Off Every Automated Task I Had Ever Set Up”: Employee Proves They’re Essential To The Company And Ends Up Getting A Huge Raise Imagine if you knew that your company brought someone in to evaluate you and decide whether or not your position was needed. You’d probably feel a huge amount of pressure, even if you were doing an A+ job, right, Pandas? Now imagine if the person evaluating you has no sense of humor and seems to be out to get you.

That’s exactly what redditor u/Frostytoes99, who describes themselves as an all-purpose IT helper, had to go through 5 years ago at the company they worked for. They told the r/pettyrevenge subreddit how they proved that they were an essential part of the company by putting the nasty person evaluating their job performance in their place.

Revenge is a dish best served cold, and we hope you’ve got your wool hats and mittens on. Scroll down for the full story in the redditor’s own words, and when you’re done reading through it, we’d like to hear your thoughts. Tell us what you think in the comments. 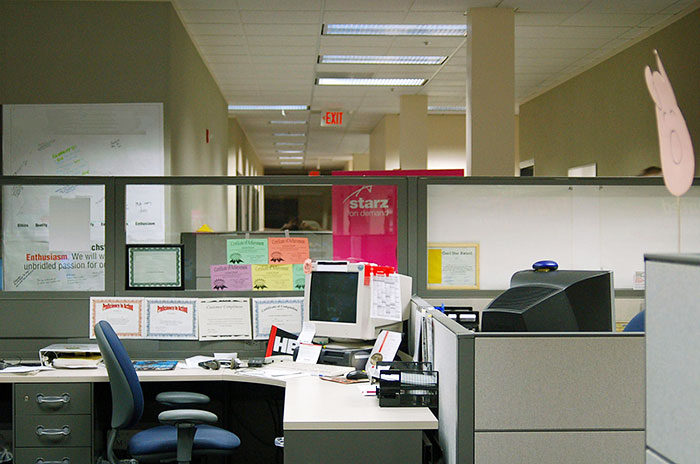 One employee shared how someone was hired to investigate their performance. Things took a very interesting an unexpected twist 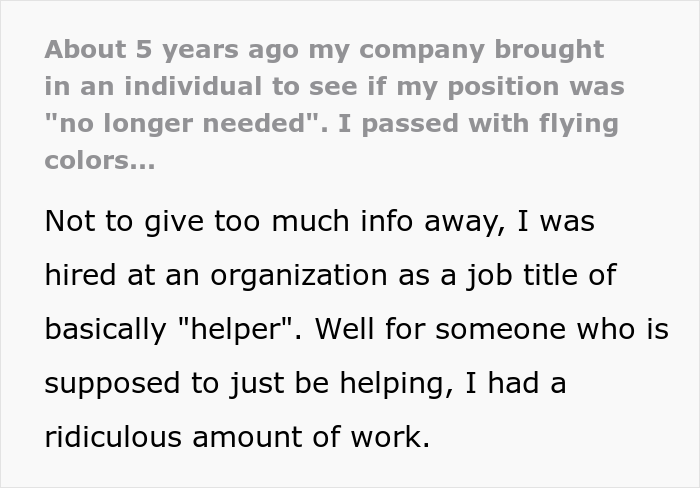 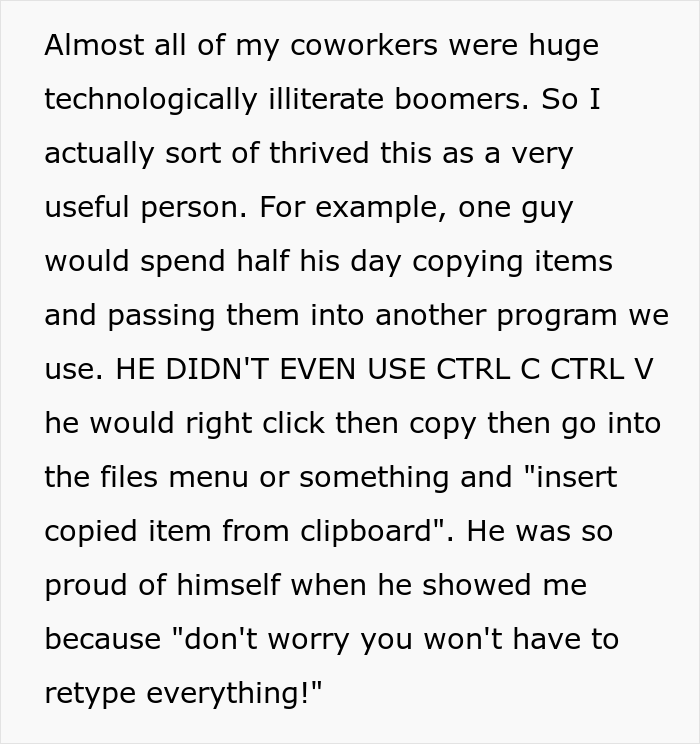 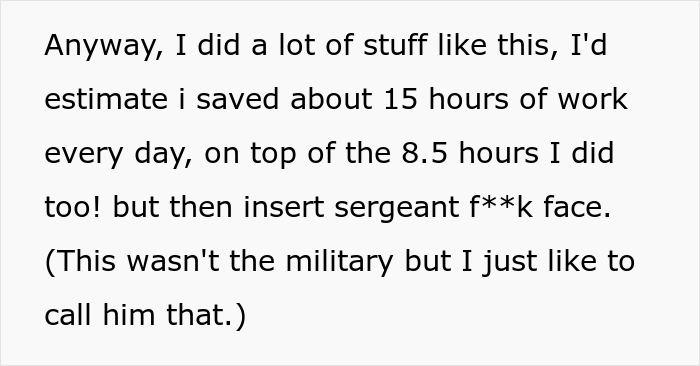 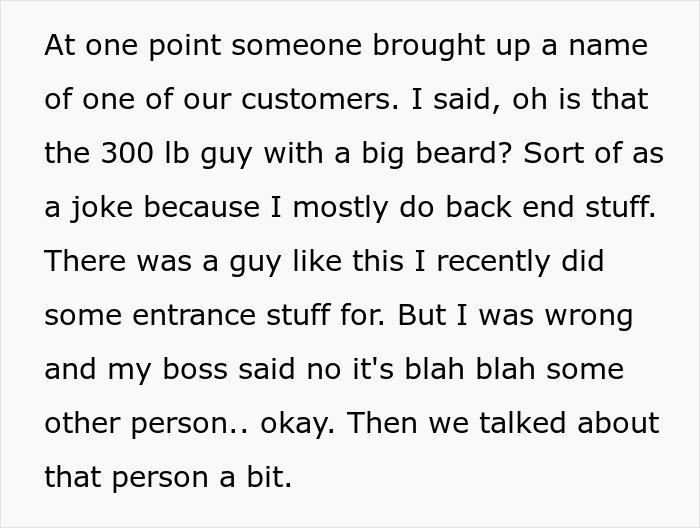 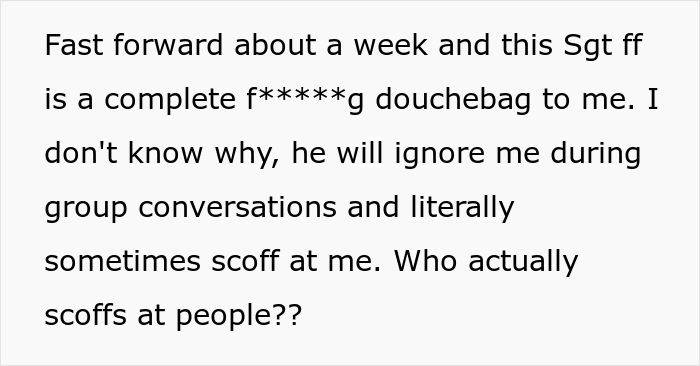 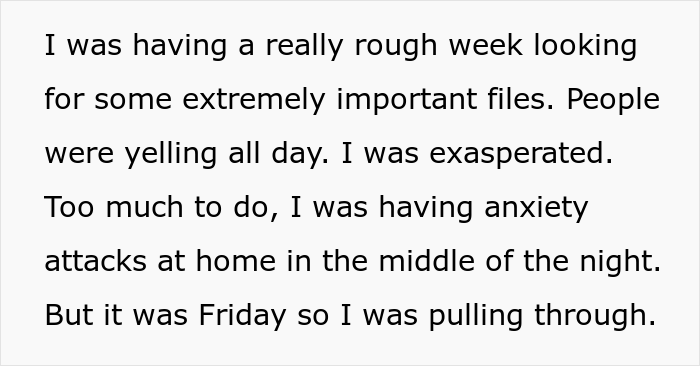 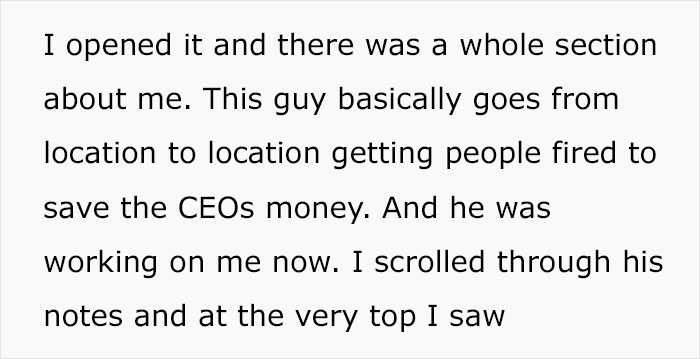 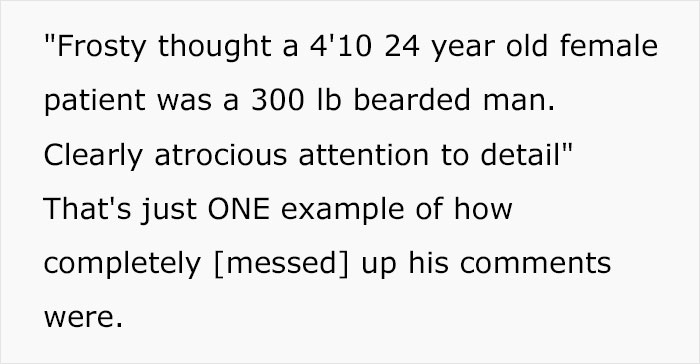 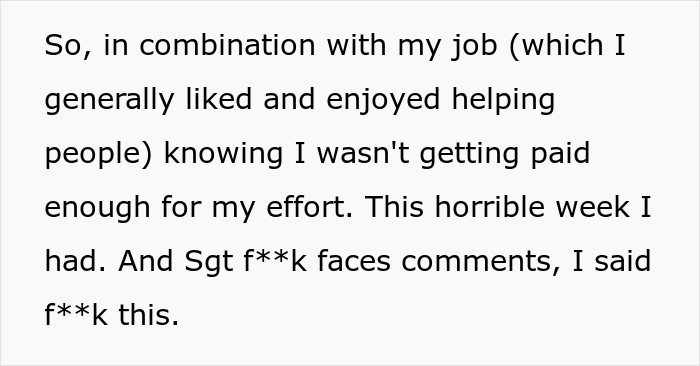 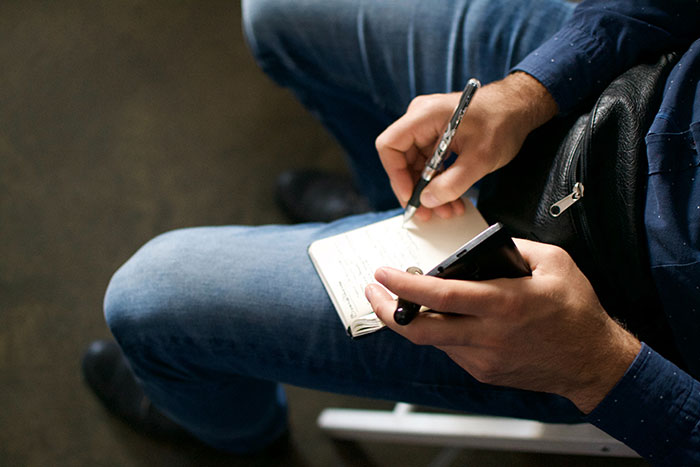 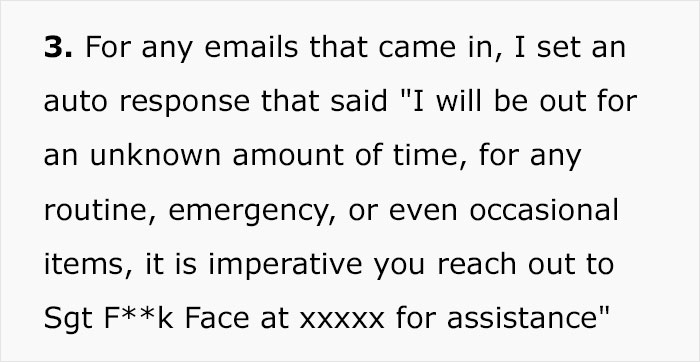 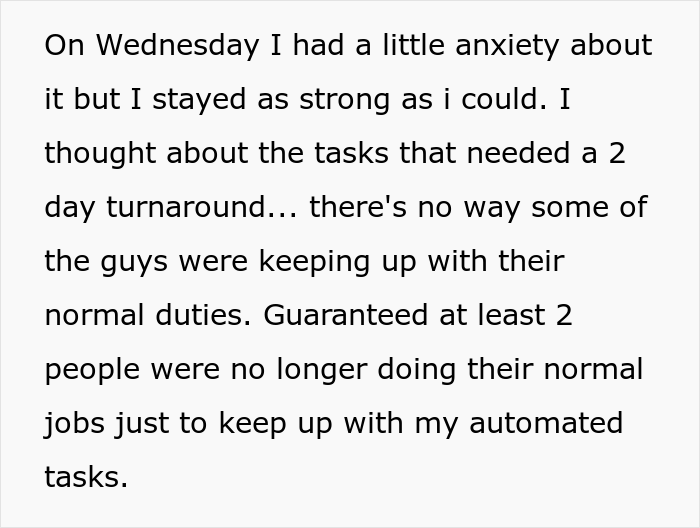 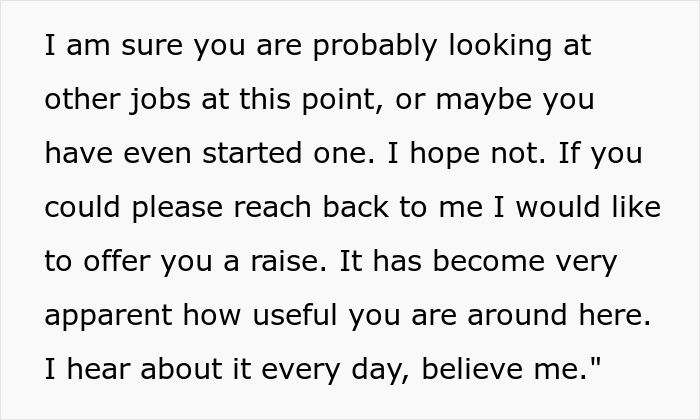 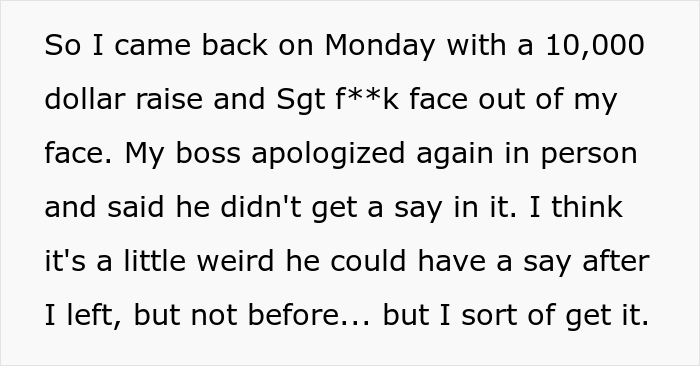 After finding the super-secret document the person evaluating them was compiling, the redditor decided to prove, once and for all, that their job was vital to the success of the company. So they went on holiday, informed everyone of this, and suggested that if anyone had any issues, they should contact the evaluator for assistance.

The cherry on top? The OP turned off all of the automated tasks that they had set up, ever. That meant that their coworkers (whom they called “huge technologically illiterate boomers”) would lose a lot of time and efficiency doing mundane tasks.

The entire plan worked better than intended. Not only did the redditor get to keep their job, but they also got a massive raise, and their boss apologized to them. Victory is sweet, and this entire result is a beehive dripping with honey. Honestly, we’re just darn proud to see how the OP turned everything to their advantage. They were both honest about their input at the company and presented it in an incredibly smart way.

Recently, financial expert and author Sam Dogen, the founder of Financial Samurai, explained to Bored Panda what employees can do to earn their bosses’ respect. We also spoke about how different generations have slightly different attitudes towards work.

“In general, every older generation thinks the younger generation is lazier and has things easier. However, each generation only knows what it knows. So it’s unfair to discredit one generation because they now have more creature comforts and so forth,” he told us earlier, during an in-depth interview.

“As someone who used to manage a small team in finance, the one thing I appreciated the most from employees was effort. If employees were trying their best to get things done and showed that they cared, I knew they were going places. Showing you give a damn about your fellow colleagues and your work is more than half the battle,” he said that having an employee with a great attitude is very important for managers.

“Bosses can inspire their employees by giving a damn as well! If the boss is always coming in on time, taking their subordinates out for lunch to see how they are doing, and works hard, employees will be inspired. And when employees are inspired, they will care more and do better work. It is a virtuous cycle. Great bosses lead by example. They are not micromanagers either. Instead, they are honest about difficult situations, believe in their employees, support their employees, and engender trust,” the financial expert went into detail about what a good boss looks like.

Sam is turning 45 this summer and is a member of Gen X. He has a lot of experience managing other employees. “We grew up without the internet and now have the internet. I did manage a couple of employees who were 10 years younger than me, hence the millennial generation. One got in trouble because he felt entitled to a much larger bonus than $20,000 after his first year out of college! After he got his bonus, he refused to come to work for a week. That was an interesting situation,” he opened up about how some employees can be a bit too entitled.

“It seems like more employees want to reach the corner office sooner, without putting in their dues. This may be perhaps due to the internet, social media, and how quickly information is disseminated. When you see someone on social media get super-rich quickly, you start feeling the same way too,” he noted that far from everyone is willing to “put in their dues” before climbing the corporate ladder.

“However, I believe for most people, the secret to their success is unwavering commitment. If you can do something well consistently for 10+ years, you will likely be set for life! However, patience is required. Just know that if the direction is correct, sooner or later you will get there.”

A lot of redditors were impressed by how the employee handled the situation. Here’s what they had to say 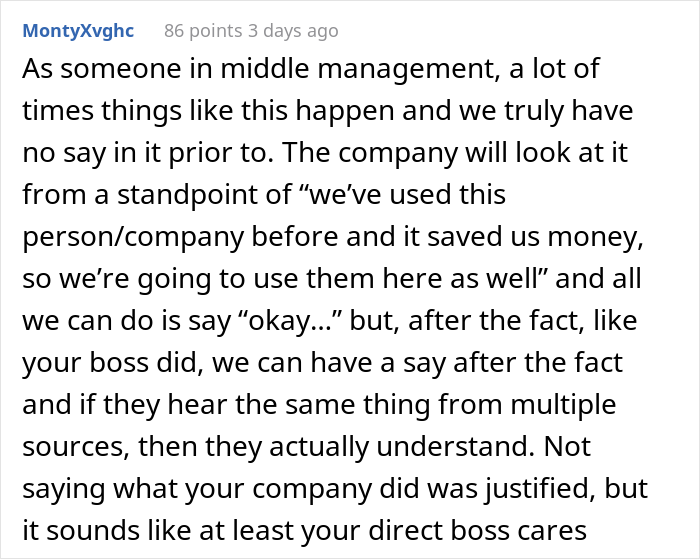 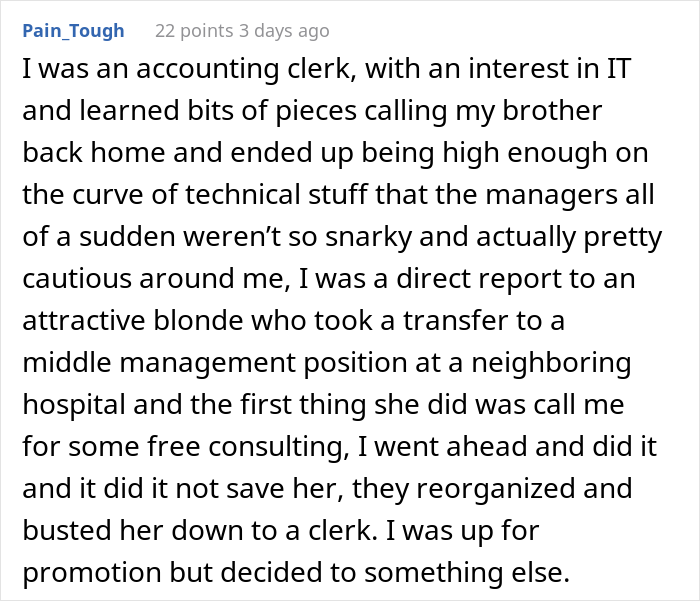 The post “I Turned Off Every Automated Task I Had Ever Set Up”: Employee Proves They’re Essential To The Company And Ends Up Getting A Huge Raise first appeared on Bored Panda. 69 Delusional People Who Are In Serious Need Of... “I Married Your Daughter, Not You”: Man Refuses...