Management Hopes To Con A 14-Year-Old Into Working A Few Weeks More, Guy Maliciously Complies And Outsmarts Him Most of us know what it’s like to work for a company that needs to up its culture game.

A belittling boss that finds a way to bully you should the opportunity arise, two-faced colleagues who are ready to throw you to the wolves when it suits them, or an environment that doesn’t inspire you to grow and do the things you once loved – whatever it might be, it’s not an uncommon phenomenon.

Regardless of how clichéd it might sound, our workplace is our second home, and when things get critical, we begin to struggle with issues that could’ve been avoided: mental health problems, burnout, frustration that gets dumped on our families – you name it.

Some of us have no other choice but to put up with the toxicity; however, this netizen, for instance, was able to leave his exploitative job, but the quitting process wasn’t all that smooth.

Encountering toxic employers is practically inevitable, so the least you can do is outwit them when the opportunity arises 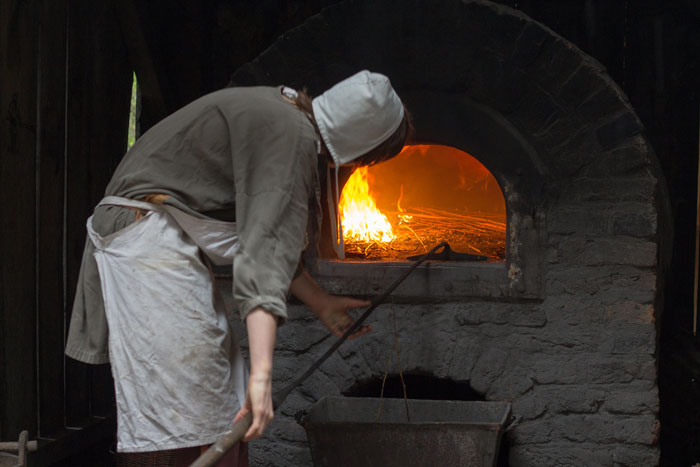 “Can’t quit my job if I’m taking the uniform home? Guess I’m leaving naked” – this online user turned to one of Reddit’s well-liked communities to share a tale about the time he maliciously complied with his boss’s demands when he tried to exploit him into working an extra few weeks despite already accepting his notice. The post has managed to receive nearly 20K upvotes and 729 comments discussing the audacity of some employers. 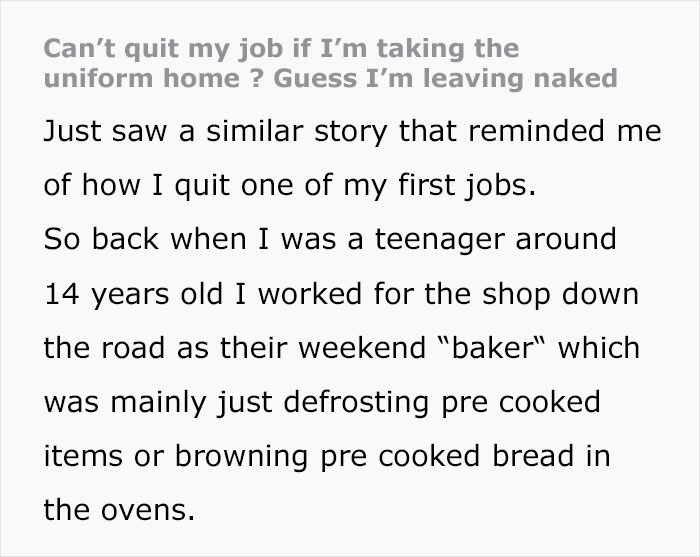 The man began his story by sharing that when he was a teenager, he worked for a bakery down the road where he was responsible for defrosting pre-cooked items and browning bread in the ovens. 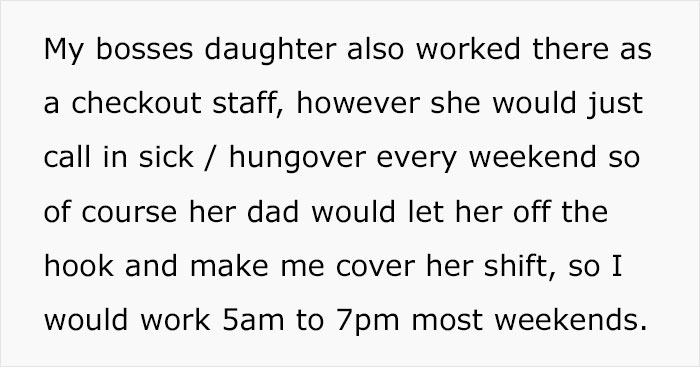 After a couple of years at the bakery, the guy handed in his notice, but the boss asked him to stay an extra week to train his replacement

At the end of that week, he went to say his goodbyes, but the higher-up had a completely different plan 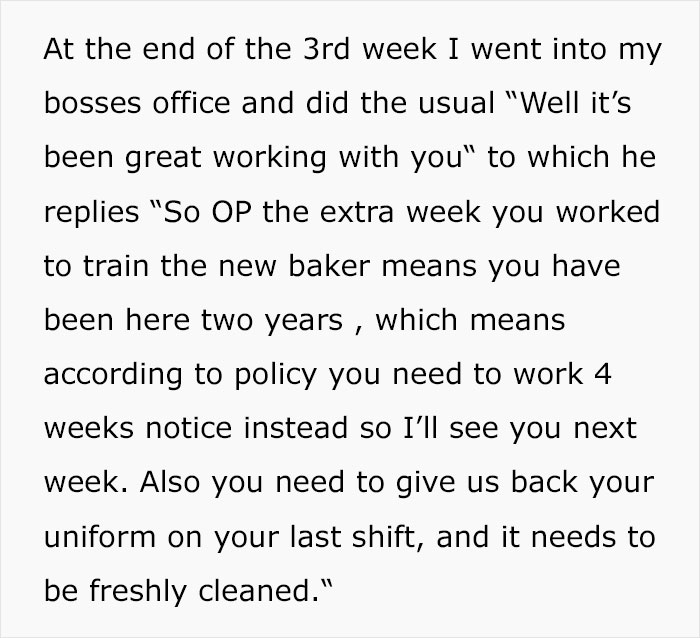 The boss’s daughter also happened to work there as a checkout operator, but it wasn’t unusual for her to call in sick or hungover. Her father would let it slide, yet he’d always turn to the author and make him cover all of her missed shifts, meaning that he’d work from 5 a.m. to 7 p.m. most weekends.

After a couple of years, the OP decided that it was time to leave the bakery, so he handed in his 2 weeks’ notice – however, the man asked him to stay an extra week to train his replacement, and he agreed.

At the end of the 3rd week, the part-timer went into his manager’s office to give him the usual farewell speech, but as it turned out, the higher-up had a completely different plan.

The man said that together with the extra week that the 14-year-old did to train the new baker, he’d been employed for two years, which then meant that the guy was obligated to give 4 weeks’ notice instead. The boss also added that he needed to return his uniform, which had to be “freshly cleaned.”

It was his 2-year anniversary at the store, so the boss tried to fool him into working for another week, blaming it on the policy rule 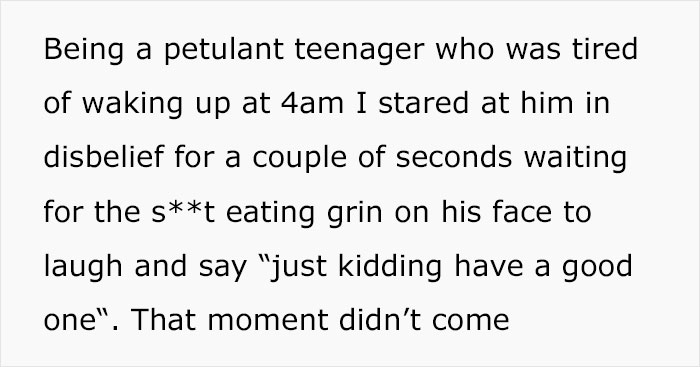 The higher-up also requested a “freshly cleaned” uniform on the teen’s last shift, so without saying a thing, the guy stripped down, dropped the clothes on the desk and walked home in his boxers 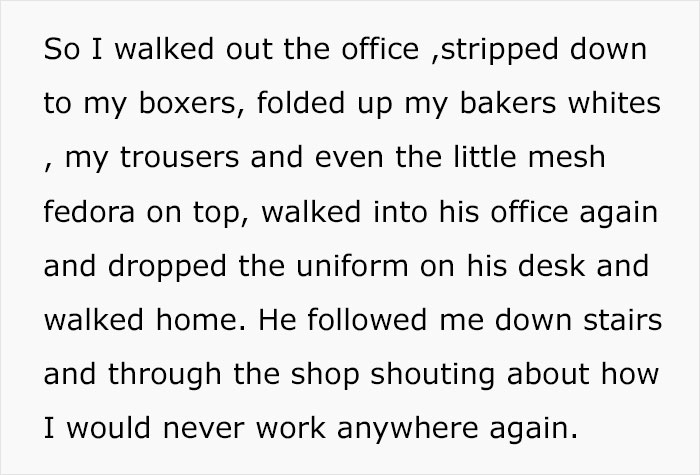 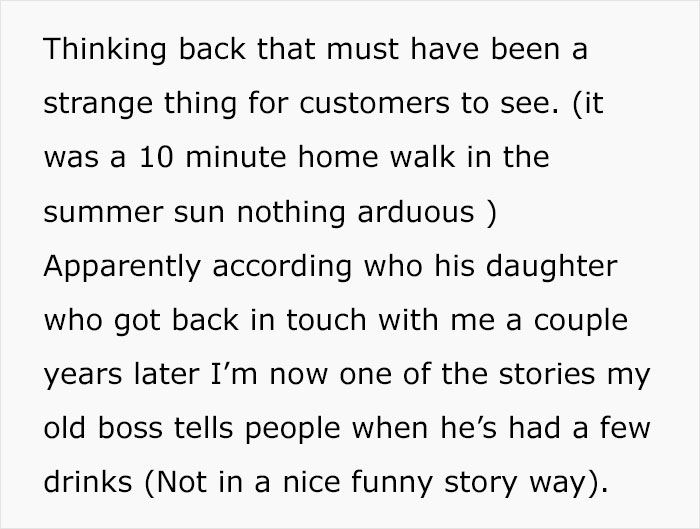 Naturally, the author stared at him in pure disbelief, hoping to hear the good old “I’m kidding,” yet the moment never came.

Despite being so young, the OP didn’t lose his head and quietly walked out of the office. He stripped down to his boxers, folded his uniform nicely, returned, dropped it on his desk, and began to walk out of the shop.

The higher-up followed him down the stairs and shouted that he’d never work anywhere again.

Moreover, years later, the boss’s daughter reached out and said that this story gets brought up every time the man has a few. Turns out the guy’s still salty about not being able to exploit his teen worker into staying for a tad bit longer.

Later on, the OP edited his post and answered a couple of questions 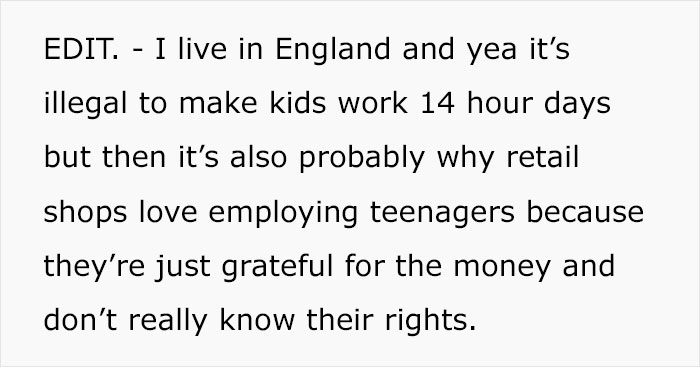 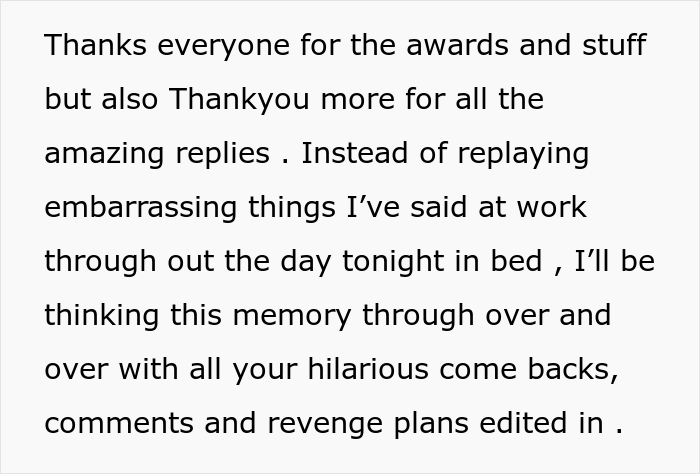 Soon after uploading the post, the man decided to edit it and answer a couple of questions he received from curious Redditors. He mentioned that it’s indeed illegal to make children work that much in England – however, it’s probably why retail stores are all about hiring teenagers, as most of them are there for the money and have zero knowledge of their basic rights. 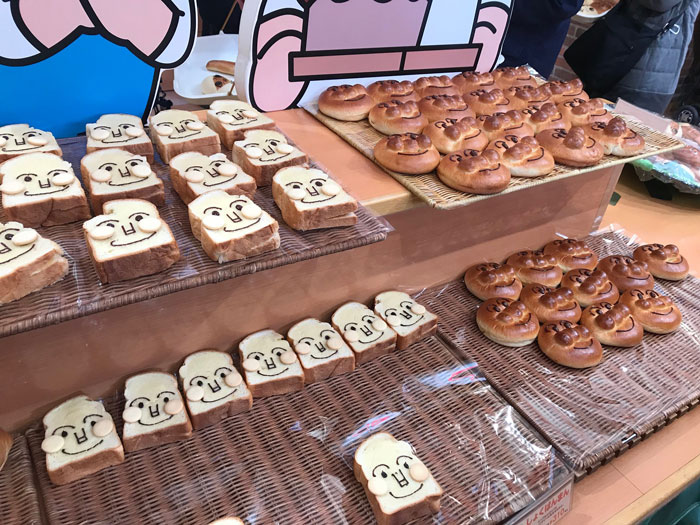 The former bakery employee also expressed his gratitude for all the awards and thanked folks for their hilarious replies. He said that he’ll be reminiscing about the event over and over – but with all of their comebacks, comments, and revenge plans edited in.

Fellow Reddit users shared their thoughts, chucklesome comeback ideas, and their own stories 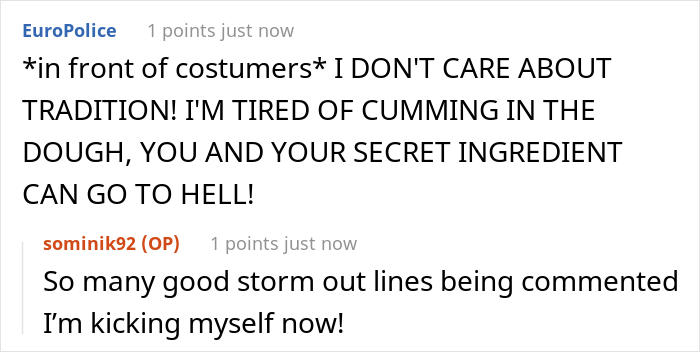 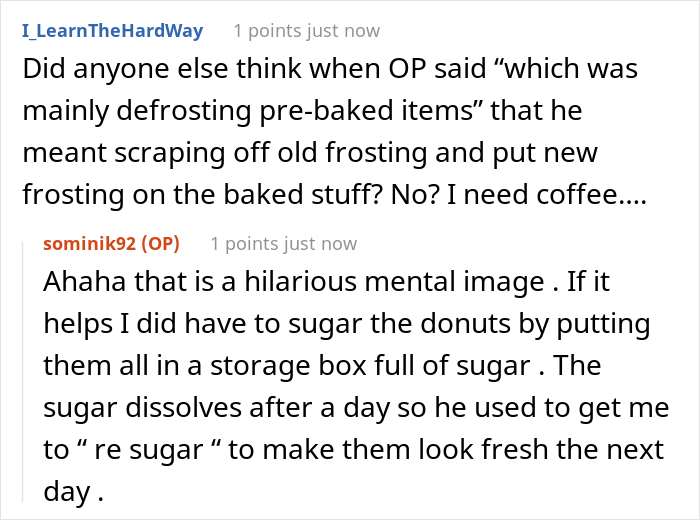 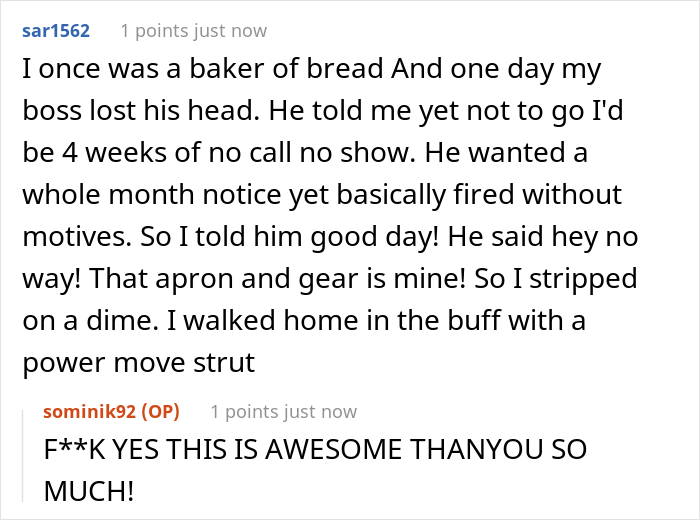 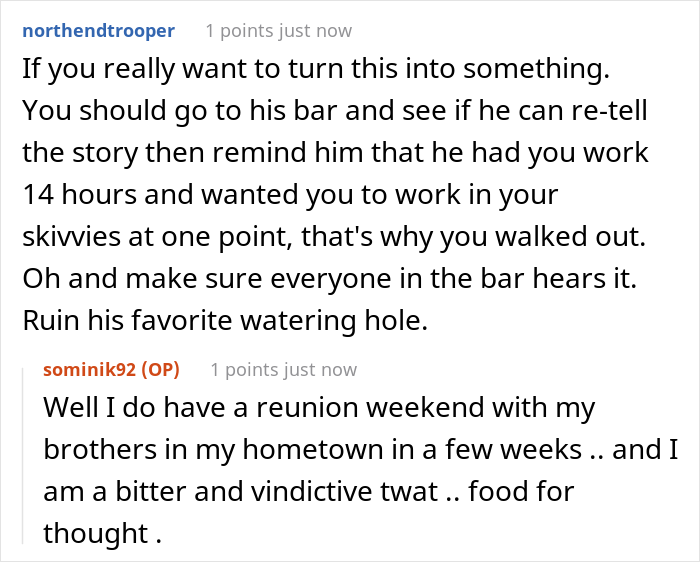 The post Management Hopes To Con A 14-Year-Old Into Working A Few Weeks More, Guy Maliciously Complies And Outsmarts Him first appeared on Bored Panda. Woman Makes Her Sister-In-Law Cry When She...