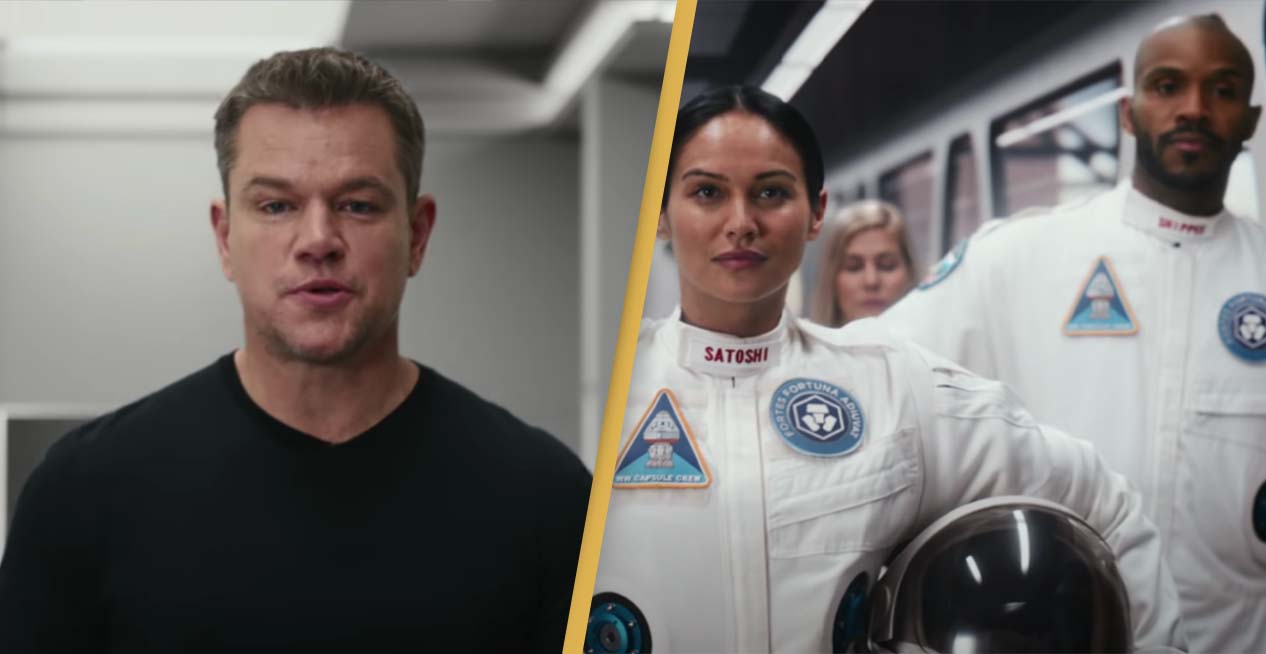 An advert for cryptocurrency featuring Matt Damon has been mocked by viewers for comparing the virtual money to the moon landing.

Crypto.com initially released its ‘Fortune Favours the Brave’ advert online in October 2021, but it gained attention recently after being featured during NFL games in the US on Sunday, January 2.

The ad opens with Damon walking towards the camera through an empty, sci-fi-style hallway as he explains that ‘history is filled with almosts, with those who almost adventured, who almost achieved.’

See the advert below:

Though some of these almost-adventurers gave up, others ’embrace the moment and commit’, Damon says. The actor’s monologue becomes accompanied with scenes of major achievements, including people climbing Everest, the Wright Brothers flying their plane and astronauts heading to space.

He explains, ‘And in these moments of truth, these men and women, these mere mortals, just like you and me, as they peer over the edge, they calm their minds and steel their nerves, with four simple words that have been whispered by the intrepids since the time of the Romans: Fortune favors the brave.’

The ad comes to an end with Damon walking towards a window that appears to look out onto Mars, before the Crypto.com website and logo appear.

The revelation that the ad is for cryptocurrency indicates that Damon’s references to steeling nerves and facing moments of truth not only apply to people leaving the Earth’s atmosphere or risking their lives for the advancement of technology, but also to those who trade cryptocurrency.

Many social media users were quick to share their thoughts on the comparison, with many describing the advert for those who may have missed it during the football.

One person commented, ‘You may be zoned out during commercials and not have noticed, but there’s an ad with Matt Damon that likens trading cryptocurrency to climbing a mountain and being an astronaut.’

You may be zoned out during commercials and not have noticed, but there’s an ad with Matt Damon that likens trading cryptocurrency to climbing a mountain and being an astronaut.

After seeing the advert, another joked, ‘Pretty sure Matt Damon told me that owning cryptocurrency made me basically like an astronaut, but that might have been a fever dream.’

A third wrote, ‘I just watched an ad with Matt Damon equating trading cryptocurrency with going to space, sailing to the new world and climbing a mountain. Never laughed so loud in public.’

pretty sure Matt Damon told me that owning cryptocurrency made me basically like an astronaut, but that might have been a fever dream.

In spite of the criticism, Crypto.com appear to be standing by the ad as it features on its website, where users can also download the app that allows you to both buy and sell ‘200+ cryptocurrencies at true cost’.