The announcement comes after the company revealed in May that WSL 2 support was available for those who wanted to test it before the general rollout after installing the KB5014021 cumulative update preview.

"You can now use Windows Subsystem for Linux (WSL) 2 type distros on Windows Server 2022," Loewen said.

"We're excited to make this change so that now you can have the same modern WSL experience whether you use a Windows with Server or Desktop SKU."

To get WSL 2 support on your system, you must click the "Check for Updates" on the Windows Server machine to update to the latest version.

To ensure that you are all set and have the update that deploys WSL 2 support, you need to check if you have KB 5014678 installed. 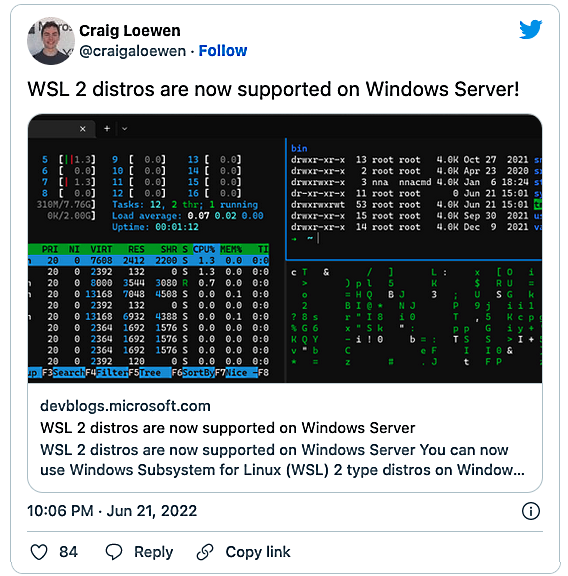 Microsoft released WSL in 2018 as a compatibility layer that allows Windows users to run Linux binaries in ELF format on their computers natively, with the help of a PowerShell or Windows 10 command prompt.

WSL 2 was released one year later, in May 2019, as a major upgrade that significantly increases file system performance, adds support for full system call compatibility, and uses a Linux kernel running inside a lightweight virtual machine (VM).

If you want to install and test WSL on your device, all you have to do is run wsl --install from a PowerShell window with admin privileges.

WSL 2 also added support for using GUI-based Linux apps with the introduction of WSLg (short for Windows Subsystem for Linux GUI) that rolled out to Windows 10 Insiders in May 2021.

Microsoft also provides detailed guidance on installing and launching Linux GUI apps on your PC. Once installed, you can launch the Linux apps from the Windows Start menu or a Command Prompt window. Microsoft reveals cause behind this week’s...