NewsGuard, a leftist company, is shifting from favoring left-wing sites to skewing their rating system and monitoring broadcast news channels in an apparent effort to be the ministry of truth.

A press release revealed that NewsGuard was expanding its partnership with IPG Mediabrands to co-create “the first-ever tool to evaluate and rate individual broadcast and cable news programs and networks.” In addition, the new scheme would go “beyond NewsGuard’s current offering of reliability ratings for news and information websites, giving advertisers greater insight before they invest their media dollars.” The press release stated that “[t]The new ratings will include 117 shows across 27 networks. They will be available in spring 2022.

The same NewsGuard who attacked Rush Limbaugh, mischaracterized Limbaugh’s post on Facebook. NewsGuard claimed that a link to Limbaugh’s site had “false claims that the coronavirus was created in a lab as a bioweapon and that it is similar to the common cold.” It turns out that NewsGuard was neither accurate about what Limbaugh actually said, nor even the date of the post.

NewsGuard even went after pro-life organizations like Live Action, giving it a dubious score of “30” out of 100 and accused that it “severely violates basic journalistic standards.” Meanwhile, NewsGuard rates baby slaughter mill Planned Parenthood with a “75” score and claimed its “Website adheres to the basic principles of transparency and credibility.” [Emphasis added.] 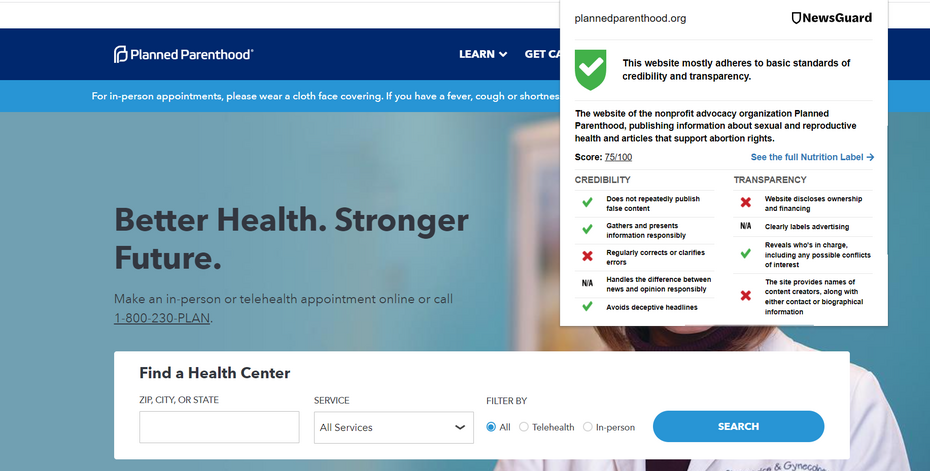 But that’s not all. NewsGuard’s “Nutrition Label” rating for LifeSiteNews relied on pieces marked as “opinion” to lambast the pro-life website for information that the outlet considers to be not factual, such as the link between breast cancer and abortion. However, leftist Jezebel, a site that appeared to highlight and sympathize with an “unlicensed, untrained illegal abortionists,” is considered a good site by NewsGuard. That’s the same Jezebel that published a piece that said the author would be thrilled if former President Donald Trump’s senior advisor Stephen Miller died of COVID-19. Jezebel currently enjoys an “87.5” rating on NewsGuard.

NewsGuard also discovered a new way to fight conservatives while pretending to war against so-called “misinformation” online. It developed a service to “place ads on credible news sources.” Its system for determining whether a source is “credible” overwhelmingly favors left-wing news outlets. A NewsGuard case study for its new service claimed that “major brands using programmatic advertising regularly send ad dollars to misinformation and disinformation websites.”

NewsGuard’s December 2020 report highlighted the prejudice the site holds against conservatives. It claimed that the organizations listed “published falsehoods aboutBoth COVID-19 and the 2020 U.S. election.” The list included outlets like Breitbart, The Blaze, The Epoch TimesAnd LifeSiteNews. The “Trustworthy and Trending” list, on the other hand, included liberal propaganda outlets like NBC News, The New York Times, Microsoft’s MSN.comThe Washington PostThe National Public Radio, which is funded by the taxpayer.

Conservatives are being attacked. For more information, contact NewsGuardDemand that conservatives are treated equally in the company. Technology companies must embrace diversity of viewpoints. Contact us at Media Research Center if you feel your views have been blocked. Contact formPlease help us make Big Tech more accountable. If Ireland had high-speed trains, Dublin would...