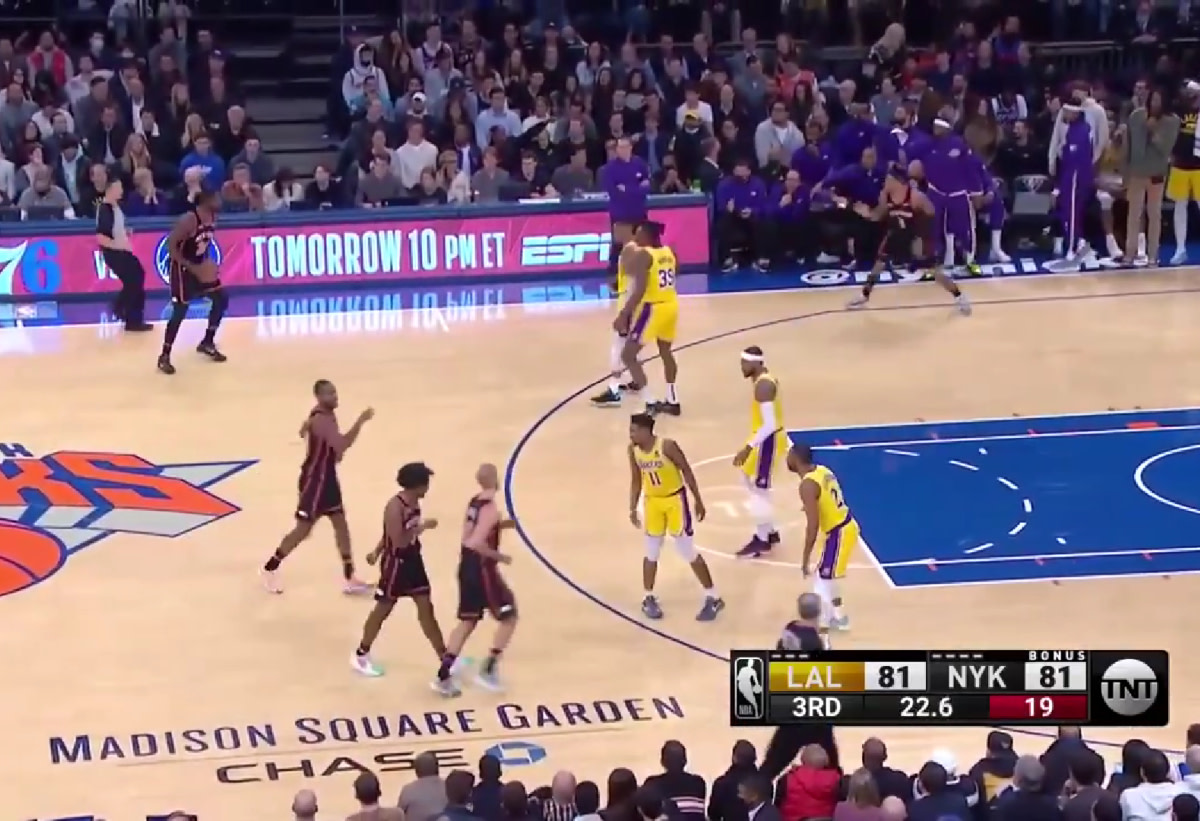 The Los Angeles Lakers suffered without LeBron James on Tuesday night, as the New York Knicks beat them at Madison Square Garden, 106-100. It seems like they could have stood a chance if it wasn't for the big mistakes made during the match.

Russell Westbrook and Dwight Howard stayed at the perimeter trying to guard the same guy, Julius Randle. The rest of the team stood in line with them, making a football or soccer formation.

This opened a big chance for the Knicks. Randle found Obi Toppin wide open as Randy Moss in his best days, passed him the ball, and the sophomore only had to dunk the ball to give his team the lead.

It was a very weird play from the purple and gold and fans are still looking for answers on why they acted like amateurs in a crucial moment of a crucial quarter. Some said they were playing another sport, while others solely focused on the confusion between Howard and Westbrook.

they were trying to pull the offsides soccer trap. it’s effective to my knowledge.

Icing on Randle, 3 minutes in the penalty box.

Why is Dwight on the perimeter? That's his fault imo you cant have your 36 year old center trying to guard Randle instead of going into the paint

Because it's Randle out there?

I mean, he was obviously telling Westbrook to stay on Toppin and that he will guard Randle but Westbrook inexplicably switched off to Randle after Toppin passed him the ball. Pretty easy to see, bad miscommunication.

True... I think I'd rather see rim protector Dwight drop back towards the paint instead of just stopping 2 feet from Westbrook and half-heartedly guarding the perimeter. But yeah weird play all around.

*Westbrook with an interesting defensive strategy

This team is cooked af.

Fortunately for the Lakers, LeBron James returned last night. He went off on the Indiana Pacers, dropping 39 points to finish the Lakers' road trip with a victory.

This team is still a work in progress, but fans are already impatient after seeing how poorly they have performed during the first month of the 2021/22 NBA season. This strange play only shows that they still have a lot of work to do before becoming the well-oiled machine Frank Vogel wants them to be.

It seems like LeBron's return can spark that flame inside them, but time will tell if this is the start of a good streak for them or another win that doesn't mean they are ready to compete for the championship. Malice At The Palace: The Inside Story