Saturday’s New York Times led with Supreme Court reporter Adam Liptak analyzing the ideological trend of the Court in “What We Learned This Term About the Supreme Court’s Shift to the Right” — a shift that has come about via the addition of three conservative justices appointed by President Trump.

The banner print headline, “Court’s Term Was Its Most Conservative Since 1931,” was accompanied by a large graphic sorting justices from left to right, liberal to conservative. It was obvious from paragraph 1 that the paper had an ideological bent.

With a conservative, six-justice majority, the Supreme Court moved incessantly to its right during its first term.It issued broad-reaching decisions that will change American lives. It eliminated the constitutional right to abortion, recognized a Second Amendment right to carry guns outside the home, It has been more challenging to combat climate change and expanded the role of religion in public life.

However, these blockbusters are only a small part of the larger story about the conservative juggernaut that the court is.According to one measurement that political scientists use, Thursday’s term was the most conservative ever since 1931.

“The data provide stunning confirmation of the Republican-conservative takeover of the Supreme Court,” said Lee Epstein, a law professor and political scientist at the University of Southern California who oversees the Supreme Court Database. 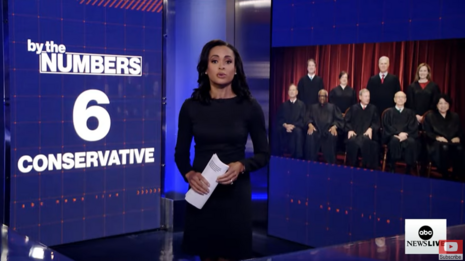 The paper sees this as a bad thing. The ACLU Director was quoted as complaining. “the doomsayers got it exactly right, as the court traded caution for raw power.”

This court has a completely new dynamic. lopsided,With six Republican appointees, and three Democratic ones. Justice Brett M. Kavanaugh was appointed by Donald Trump as the replacement for Justice Kennedy .

Liptak was frank about his feelings:

The court’s three liberals were perfectly aware that they had been marginalized by what Justice Sonia Sotomayor called, in dissenting from a decision that made it harder to sue federal officials for constitutional violations, “a restless and newly constituted court.”

In their joint dissent in the abortion case, the three liberal justices said the court had replaced reason with power.

Liptak can be reliably linked:

The court’s public approval is certainly plummeting. In a Gallup poll taken after the leaked draft of the abortion opinion but before the formal decision, for instance, public confidence in the court fell to 25 percent, the lowest in the nearly 50 years over which the survey has been conducted.

Professor Grove said the court’s authority could not withstand a lasting loss of public trust.

Liptak has been writing about the supposed decline of the Supreme Court’s credibility for at least 10 years, conveniently tracing the trend back to the 2000 Bush v. Gore decision. The Times‘ telling, public disapproval increases with every conservative ruling laid down. Oddly, the Court’s standing with the public wasn’t an issue during the body’s decades of reliably liberal decision-making on abortion, education, affirmative action, religion, gay marriage, etc.

Greenhouse asked rhetorically: “Inside or outside of the Supreme Court, do conservatives run screaming to the media?” They didn’t. The behind-the-scenes drama remained largely unknown….”

Conservatives certainly didn’t protest the homes of justices or try to assassinate them. Recent years have seen liberal activists whining about fascism dawning, and the press has developed fake concern over the Court’s public image.