I used to have a boss who would go to job interviews with absolutely no intention of getting hired. Not because he hated money or something—he was very happy with his current job and had no intention of changing that. But he just wanted to stay on the ball, see how much he was worth in the job market and how much he could actually push himself to.

Now, turns out, he’s not the only one, as there are more ‘professional job interviewees’ who apply for jobs and go to interviews without really needing the jobs. This one student decided he’d turn it into a hobby, sharing his experience in brief thus far with Reddit.

Going to a job interview can be fun, if you have no intentions of getting hired, that is 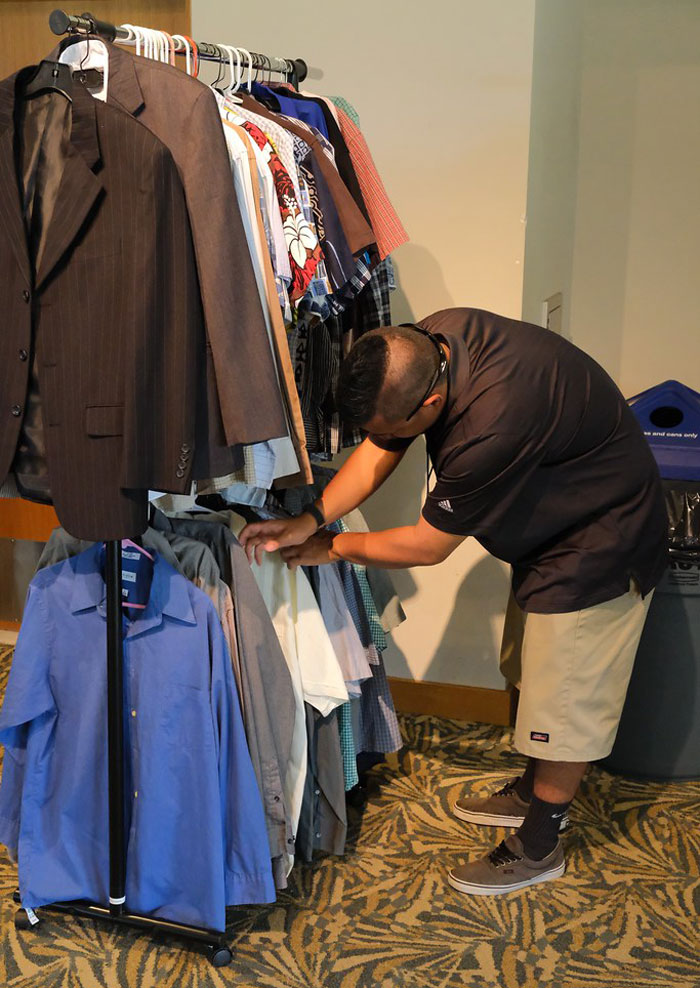 Image credits: University of Hawai‘i–West O‘ahu (not the actual photo)

Meet Reddit user u/R_o_g_z, a student with whom Bored Panda got in touch, who has recently decided to apply for jobs, go to job interviews, but never intend on getting hired.

According to his now-viral post on r/AntiWork, he has been doing this for the past four months. He admits that he does make up the qualifications that the employer seeks, creating an impression of the perfect candidate, but this candidate doesn’t really exist.

And you’d be surprised that some actually do that, with one Redditor sharing his experience of going to interviews for jobs he has no plans of actually getting 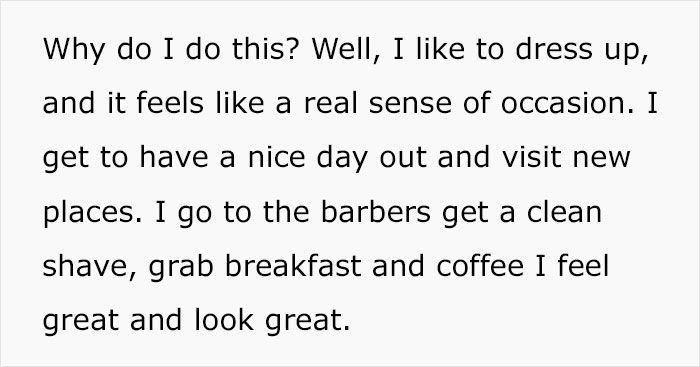 “Previously, I was looking for work and getting nowhere. It was honestly one of the most dehumanizing experiences of my life, so I started looking into how the hiring process works,” Rogz explained the origins of his idea.

“It’s all automated. Recruiters use applicant tracking systems (ATS) to scan your resume and if you don’t meet a certain criteria, that’s it. It turns out that because I had a 1-month gap in my resume I was instantly discarded by ATS, so I changed this and I was suddenly getting interviews.”

“Can you believe that? Because of a 1-month gap I was not fit to do the job? But after changing February to January, I was suddenly a prime candidate. And so my journey down the rabbit hole started.” 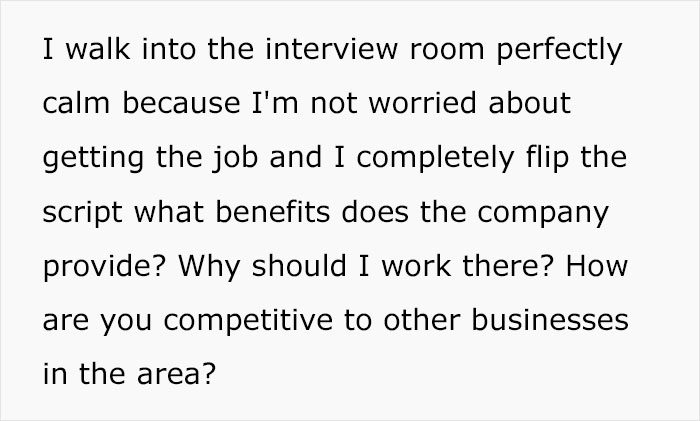 In his post, Rogz explained that he does this because he like the process: he dresses up, goes to the barber for a fresh shave, gets some breakfast and coffee—in other words, turns it into an occasion where he gets to have a nice day out and visits new locations.

Since he gets to the interview without really needing a job, he’s calm about it all, and likes to “flip the script” by asking what the company can do for him: what benefits it offers, why he should work there and whatnot.

He says that the reactions he gets vary from employer to employer: some are confused, while others engage die hard mode and attempt to persuade him to actually take the job.

When it comes to salary talk, he explains that the salary doesn’t really meet the market standard, and just bids them farewell. Some engage a die harder mode and start emailing him, negotiating on the salary and whatnot.

“This is what employers don’t understand, this is why they are having such a hard time filling positions, times have changed, it is now no longer just about the money,” elaborated Rogz. “Among the typical bad practices that will no longer be accepted there’s this strange trend with employers not being upfront and hiding the salary behind the interview process. They have already demonstrated their complete and utter disregard for myself and my time, why would I believe that they would start being more considerate after they hire me?”

Many applauded Rogz’s hobby, while some shared their own stories and ideas

While OP does admit that something might be wrong with him, and he’s not worried about the implications of this, he also seems sure that people who apply after him have a better experience because of this.

“Employers seem to forget that it’s a two-way process—they are interviewing someone because they NEED that person, they’re not hiring because it’s lonely at the office and they need more people to hang around the water cooler. I’m attending the interview because you’re interested in me so you also need to demonstrate why candidates should work there,” points out Rogz.

The post drew quite a crowd on the subreddit, garnering over 46,000 upvotes within 20 hours, and hundreds of Reddit awards. And there was a slew of reactions as well. 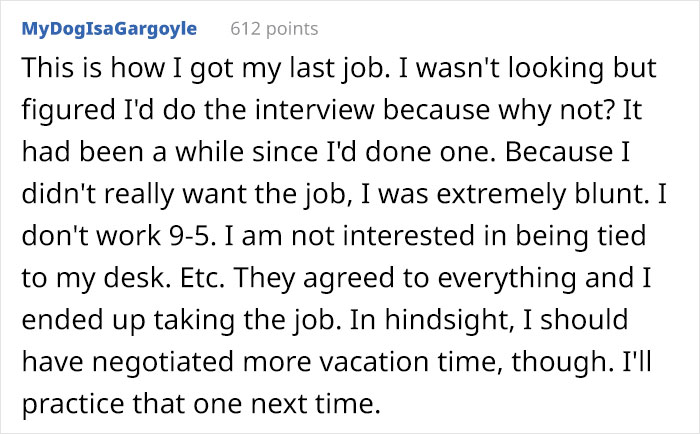 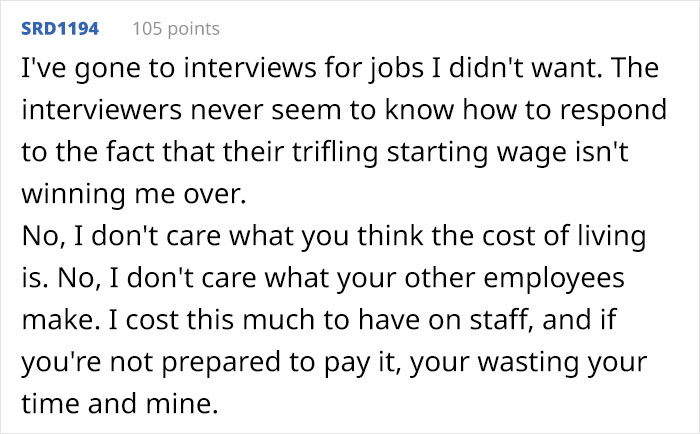 For the most part, people applauded the idea, with some being genuinely interested—so much, in fact, that they asked Rogz to document it—and others saying that this is a great tactic to fight uncontrollable job interview anxiety, a desensitization of sorts.

Yet others shared their own stories of doing the same thing, under varying circumstances. One commenter even suggested taking it to the next level by getting into lunch interviews. Hey, free meal. Probably.

There were, of course, some who were were not as pumped about it, speculating that OP is a trust fund nobody who has nothing to do, but Rogz was truthful about it and explained he came from a single parent household raised on a council estate and surviving off his student loans.

Lastly, we’ve asked Rogz to share some advice based on his experience on how to nail a job interview, and he had this to say: “Change your mindset. Employers need to fill this position, you are there because they are interested in you, however, this is just one of many opportunities that will present themselves to you.”

Whatever the case, you can check out the post in full here, but before you go, tell us your thoughts on this, and possibly share some of your “I went to the job interview for fun” stories in the comment section below!

The post People Are Praising This Guy Who For The Past 4 Months Has Been Going To Job Interviews Pretending To Be The Perfect Candidate And Walking Out Every Time Saying The Pay Is Too Low first appeared on Bored Panda. Artist Makes Comics About Her Daily Life And...