During his morning show on Monday, comedian and radio host Rickey Smiley revealed that his 19-year-old daughter, Aaryn, was shot three times over the July 4th holiday weekend in Houston.

“I wasn’t even going to say anything about this. I’ve been dealing with this all morning, sitting up here with butterflies in my stomach trying to do the show. My youngest daughter was shot last night,” Smiley said on the “Rickey Smiley Morning Show” Monday. “She’s in the hospital right now… I’m just so angry.”

The Houston Police Department confirmed in a statement that the incident occurred at 6898 South Freeway in Houston Sunday night. The statement went on to say the victims, three men and one woman, were transported to an area hospital.

Smiley’s daughter was in a different vehicle at the light, according to investigators, and was caught in crossfire.

“The tears won’t stop,” Aaryn tweeted Wednesday morning. “I’m so happy to be alive. beyond grateful. I was so close to death.” 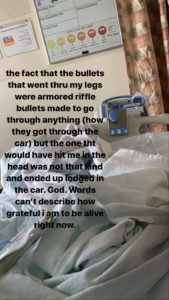 Aaryn, who turned 19 just days before the shooting, posted a series of photos on Instagram including one of the inside of car with blood on the seat. Through those series of posts, she shared that she was shot in her legs and apparently a bullet close to her head.

“[T]he fact that the bullets that went thru my legs were armored riffle bullets made to go through anything (how they got through the car) but the one [that] would have hit me in the head was not that kind and ended up lodged in the car. God,” her accompanying picture read. “Words can’t describe how grateful I am to be alive right now.”

Rickey recently released a video update of how she was doing:

One of the worst parts of this whole ordeal for both Rickey and Aaryn was her being alone in the hospital. Due to current coronavirus restrictions,…

We Object To These Utterly Insane Real-Life...