Watch the trailer for ‘Borat 2,’ coming to Prime Video on October 23rd 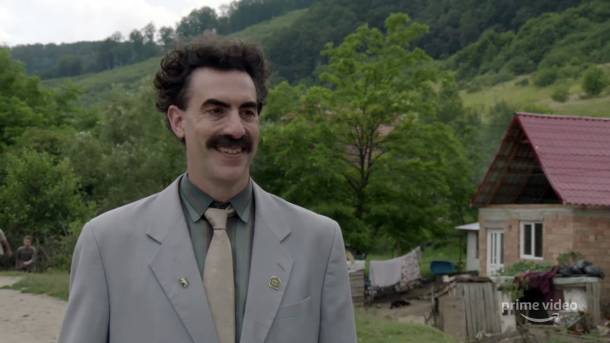 After rumors began spreading about a Borat sequel being filmed in secret earlier this year, Amazon finally announced the movie this week and shared the first full-length trailer ahead of its launch. Borat Subsequent Moviefilm: Delivery of Prodigious Bribe to American Regime for Make Benefit Once Glorious Nation of Kazakhstan (yes, that is the real title) is coming to Prime Video on October 23rd, which is less than two weeks before the 2020 election.

The reason the timing is so relevant is because, as you’ll see in the trailer, the climax of the film appears to be Borat (Sacha Baron Cohen) somehow sneaking his way into an event where Vice President Mike Pence is giving a speech. Oh, and he is dressed up as Donald Trump while he shouts at Pence on stage.

You can watch the first full-length trailer for Amazon Prime Video’s Borat: Subsequent Moviefilm below:

Earlier this week, Deadline reported that the international rights for the Borat sequel had been acquired by Amazon Studios. It was said to be the first movie to be filmed during COVID-19 lockdowns, with a minimal crew capturing the footage of Sacha Baron Cohen risking his life and acting like a lunatic as soon as restrictions of film production were eased. And the “risking his life” part isn’t hyperbole, as sources tell Deadline that Cohen wore a bulletproof vest on two separate occasions and found himself in other “risky and dangerous scenarios” during the shoot.

As for the Pence cameo, the story of the movie appears to revolve around Borat giving his daughter away “as a gift to someone close to the throne,” by which he means the White House. Unsurprisingly, their misadventures look to shine a light on some of the most controversial problems facing the United States today. One of Marvel’s most important new Avengers was... 6 This Useful Infographic About the 7 Types Of Plastic Will...