Containing the urge to say “I told you so” when you warned someone about a situation or you found out that your facts were the correct ones is very hard. Especially if you don’t like the person or if they were really convinced you were wrong.

This woman who was a guest at her brother’s wedding couldn’t keep her tongue behind her teeth and blurted the phrase out to the bride, who got really upset, and it caused a bit of a stir in her family. She was right about the situation and its outcome, but people in the comments discuss whether she was right to announce it to her sister-in-law who was already irritated.

Woman warns her SIL about her nephew, but she doesn’t listen, only to regret it later, and the OP celebrates her victory with the sweet “I told you so” 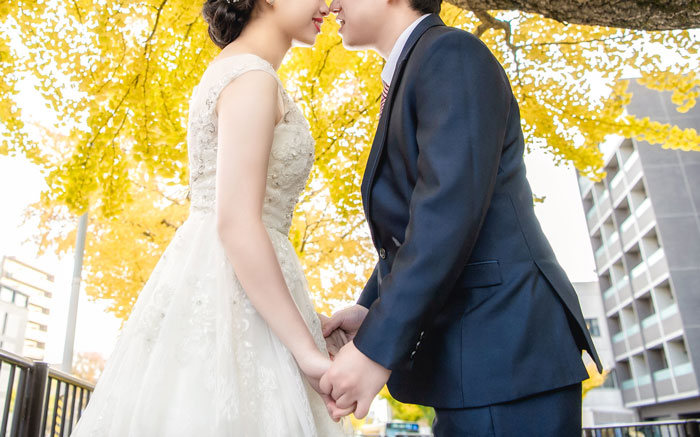 The Original Poster (OP) is a 27-year-old woman whose brother recently got married. She has known his now-wife for 3 years, but it seems that she is not very impressed by her character.

According to the Redditor, her SIL is very demanding and controlling, and on top of that, she likes to be always right. Her family is no better as they like to think they are better than everyone else. The woman has also noticed that they expect everything done for them without offering to help others. 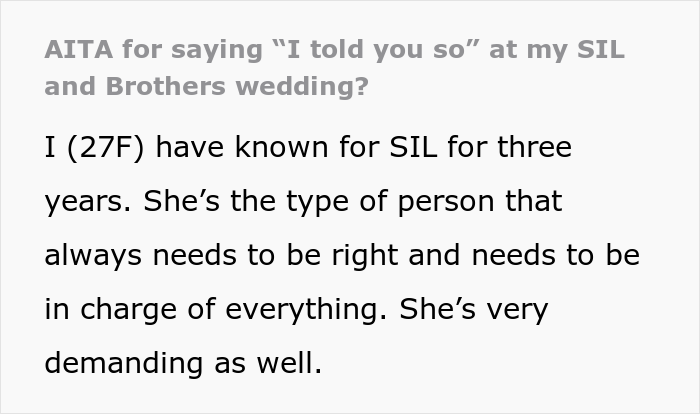 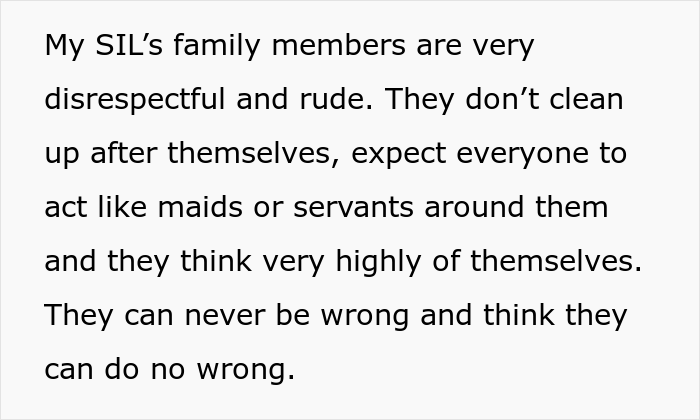 Because that family thinks that they can do no wrong, they don’t punish their children. But they don’t discipline them or explain to them that their actions are wrong, either, so it’s not like they are following gentle parenting.

That has led to SIL’s nephew growing up always getting his way, and if he doesn’t, he will throw a tantrum. He is used to being the center of attention, so such a moody child is not fun to be around.

The OP found out that her SIL was planning to invite the child to her wedding when she was helping her with the invitations. The woman told the future bride about her concerns of the boy throwing a fit during the ceremony or reception, but that offended her.

She noticed that her SIL’s nephew was on the list, which was a concern, as he was a spoiled kid who threw tantrums if something didn’t go his way 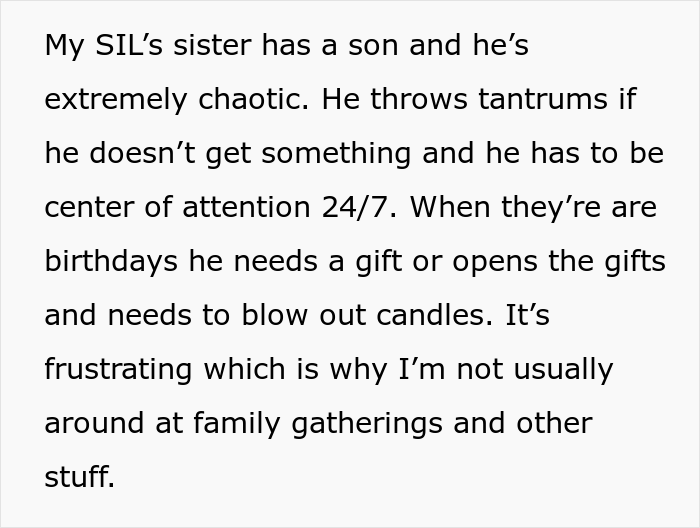 The SIL didn’t keep it to herself either and told her sister, the boy’s mom, about what she was saying behind his back. The mom was convinced nothing bad would happen and her son had to come to his aunt’s wedding.

The moment of truth came on the wedding day. As everyone was having fun, the nephew wasn’t, so he threw such a fit that the pastor couldn’t continue with the ceremony and needed to wait until the parents left.

For some reason, they came back to the afterparty and the kid caused a scene again by screaming at the top of his lungs and pushing his aunt. The bride had a glass of wine in her hand and spilt it on herself, which made her so upset she started crying.

The woman warned the bride that her wedding day might get ruined, but the SIL got offended by her words 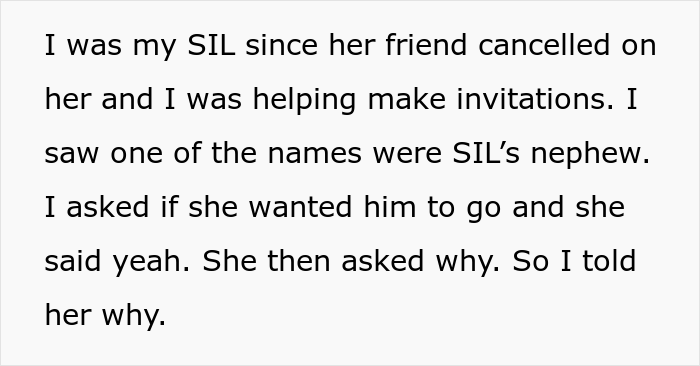 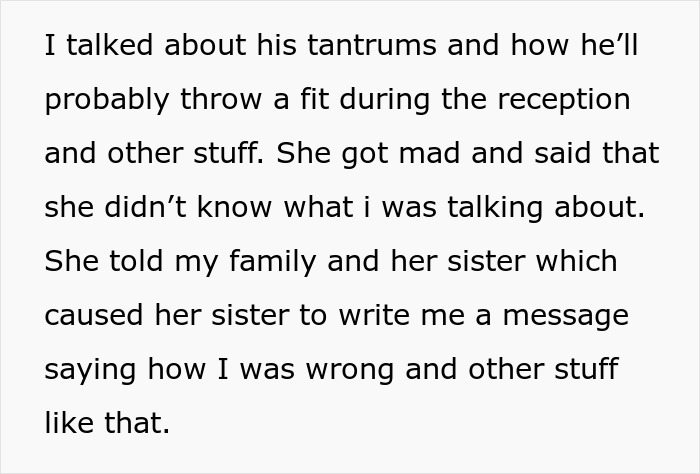 The OP couldn’t resist telling her that she’d warned her that something similar may happen. Researchers at Leiden University actually studied this phenomenon of the urge and satisfaction of telling someone “I told you so.”

They found that even if a person is right about a negative thing, like in the OP’s case of a child causing havoc at a wedding, the person still feels a rewarding effect in their brain. The results showed that “reward-related neural mechanisms are involved when someone is proved right, even in situations that end in monetary loss.”

On the wedding day, OP’s prediction came true and she couldn’t resist letting her SIL know she was right 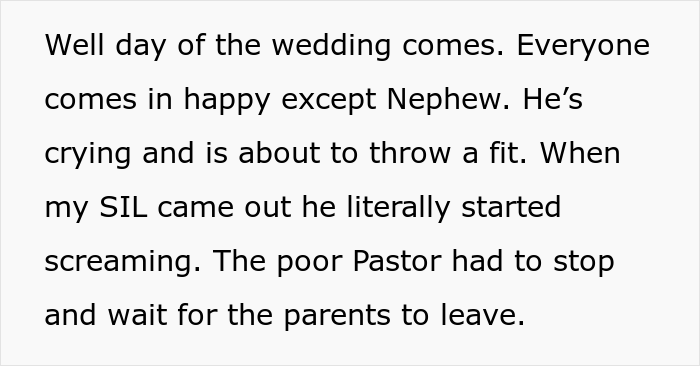 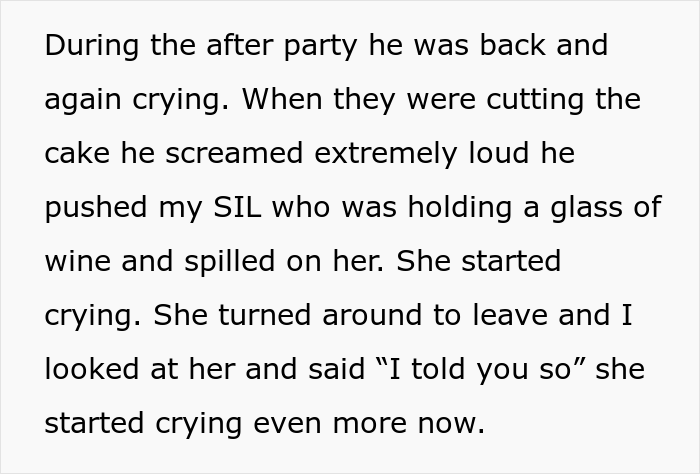 It happens unconsciously, but when your brain knows that it will be rewarded, it just needs to tell the person who didn’t believe you that you were right. However, it isn’t productive and many people may think it is immature.

According to the Foundation For Economic Education, you just look pathetic when you do that and it makes the trust between you and the other person weaker. Also, stating that you were right doesn’t solve any problems and makes you seem concerned about making yourself look good.

They suggest that allowing the person to learn their lesson on their own is more helpful and they will be more likely to trust your opinion in the future.

It upset the bride even more and OP’s mom thought it was immature, so the woman wonders if she needs to apologize 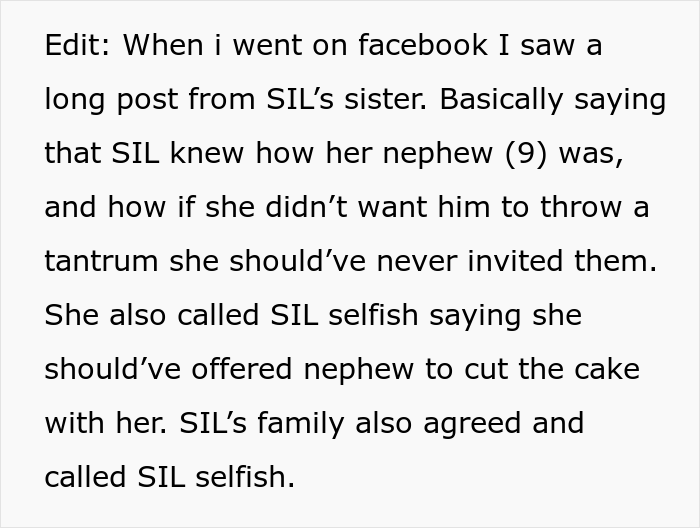 After the OP got the satisfaction of pointing out her prediction was true, she came home to a request to apologize to the bride. That is when she asked the internet if she should have stayed silent about it as the bride was already in tears and her comment was unnecessary.

Many people thought that the OP shouldn’t have said anything because it was her SIL’s wedding day and it was already ruined, although they agreed that the bride shouldn’t have gotten mad at her for trying to save the celebration from drama. However, others loved the pettiness and admitted that they would have done the same and it wasn’t her who ruined the wedding. 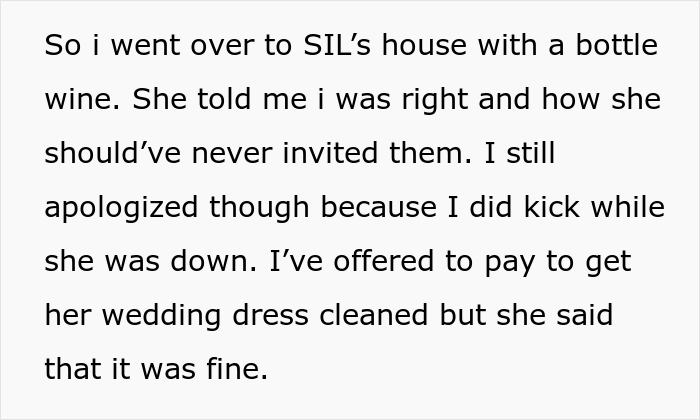 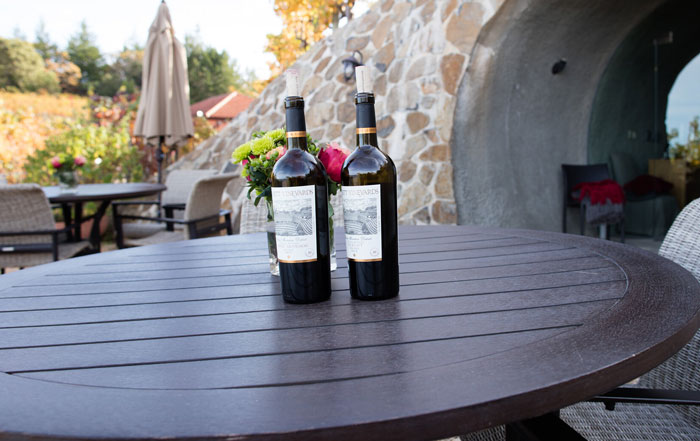 In the end, the OP posted an update which was something similar to a happy ending. The woman saw her SIL’s sister, the boy’s mom, pouring dirt on the newlywed on Facebook. According to her, the aunt knew how her nephew was, so a tantrum was to be expected, and if she wasn’t able to handle it, she shouldn’t have invited the boy.

The OP felt bad for her SIL that her family turned their backs on her, so she went to apologize with a bottle of wine and it seems that the two women made peace with each other.

Do you think you would have managed to control yourself and bite your tongue? What was your reaction to the story before you learnt about the update? Let us know in the comments!

Redditors realized how valuable OP’s advice, was but were conflicted whether she should have mentioned it to the bride on her wedding day which was already ruined 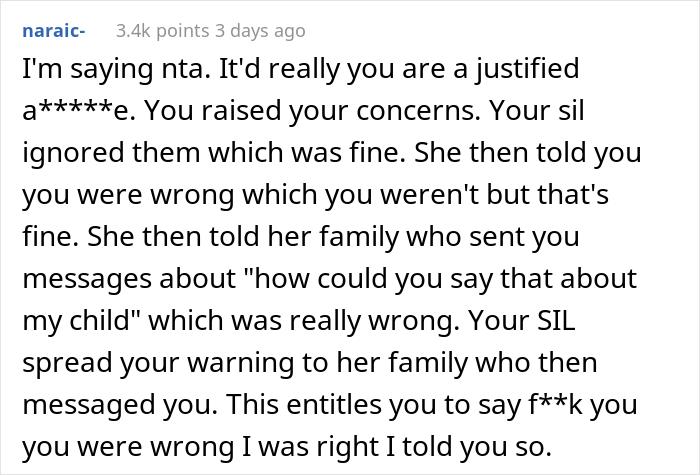 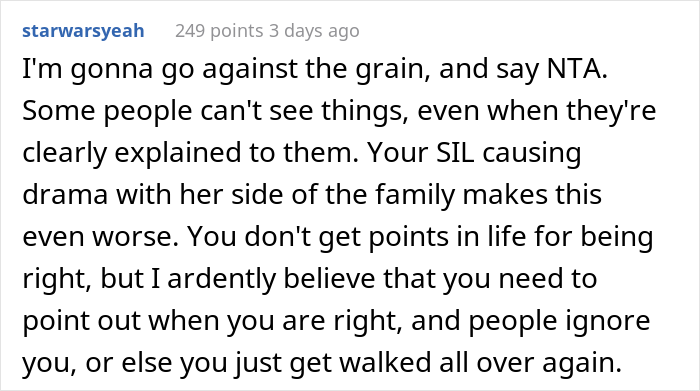 The post Woman Makes Her Sister-In-Law Cry When She Tells Her “I Told You So” After Her Nephew Ruins Her Wedding As She Predicted first appeared on Bored Panda.

The evolution of Kylie Jenner through every... Management Hopes To Con A 14-Year-Old Into...