Humans have to be some of the most, if not the most, complicated beings on the planet. On top of functioning on a basic level as biological beings with innate instincts and needs, we are also expected to somehow operate on a social level. And you know how that goes, and you know where this is going.

A woman in her mid 20s has recently turned to the Am I The A-Hole community for some perspective with a story involving her now ex-husband who turned out to be gay—but that wasn’t the problem as much as the cheating, the lying, his fundamentalist mother, the ex never telling anyone about his sexual orientation, and everything in between. 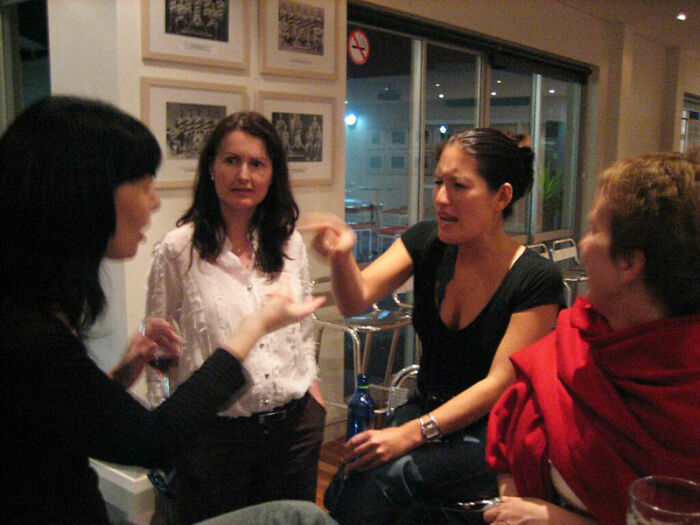 Reddit user u/life_after_love, with whom Bored Panda got in touch, shared what she called a “long and sucky story,” but in a nutshell, she found out her husband was cheating on her with another man. Apparently, he wanted a “normal life” with a wife and kids, seemingly serving as an alibi of sorts for him to continue living his life as a homosexual man, but she was having none of it.

So, the two split, but it doesn’t end there. For context, the ex’s family are fundamentalists, with the mother being very extreme and intrusive in the now ended relationship. They don’t believe in divorce, so this move immediately prompted the mother-in-law to interfere and effectively go nuts on OP.

And this woman got the short end of stick when she found out her husband cheated, and he’s gay, and, long story short there’s a family feud now 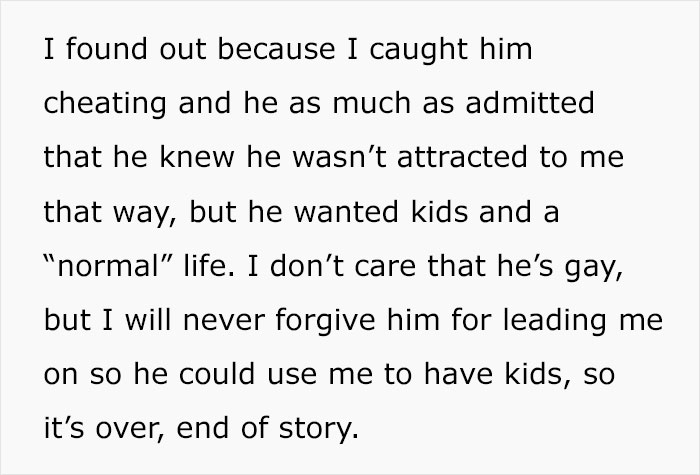 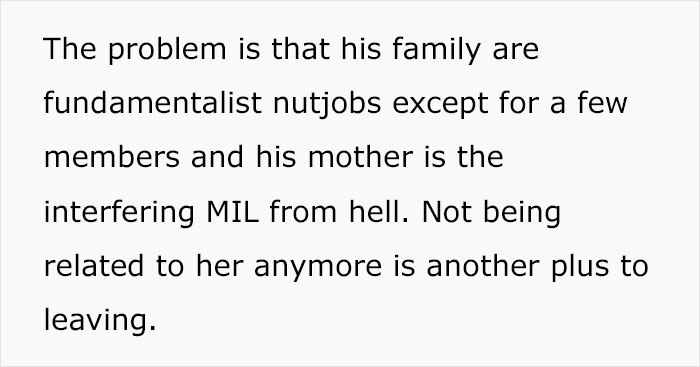 Besides it being a bad break-up situation, Life After Love also found out the ex didn’t tell his family about him cheating, and told the mother that OP was actually divorcing him because they weren’t making love as often as she actually wanted. Oh, and he didn’t come out to his family, either.

While OP did try to defuse the situation, explaining that she was cheated on and avoiding any talk about him actually being gay, because she knew the parents well enough not to and it’s none of anyone’s business anyway, the MIL was relentless, and started defending him, saying “men are just that way” and that she’s actually the problem because she needs to try more with her looks and whatnot.

This was the breaking point. While she did not intend to be mean, or to cause any trouble at all, and she owns up to this, she is human, and she got provoked and exploded. 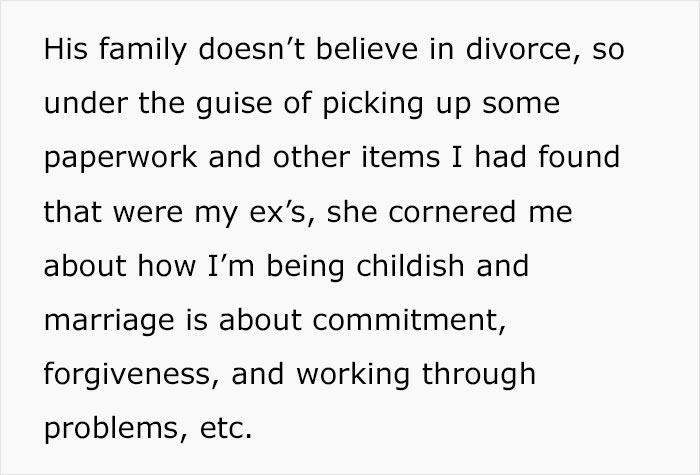 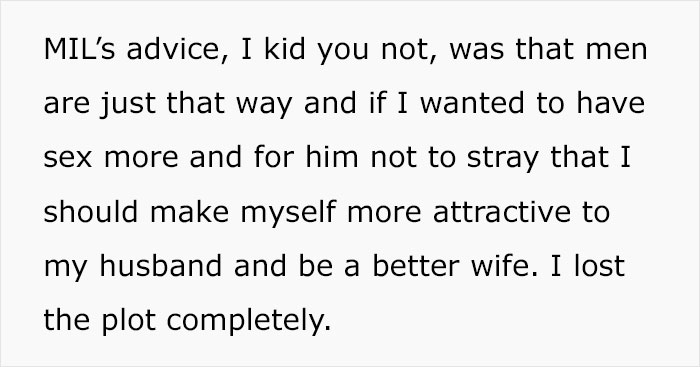 “I told her that the only thing that would make me more attractive to my ex would be a sex change operation and that I hoped he and his boyfriend adopted her some grandchildren so she could finally shut the hell up about it,” explained Life After Love.

Needless to say, it all turned into a huge family drama real quick. There were sobbing phone calls, the family’s cultural values may get the ex disowned, and everyone is blaming OP. 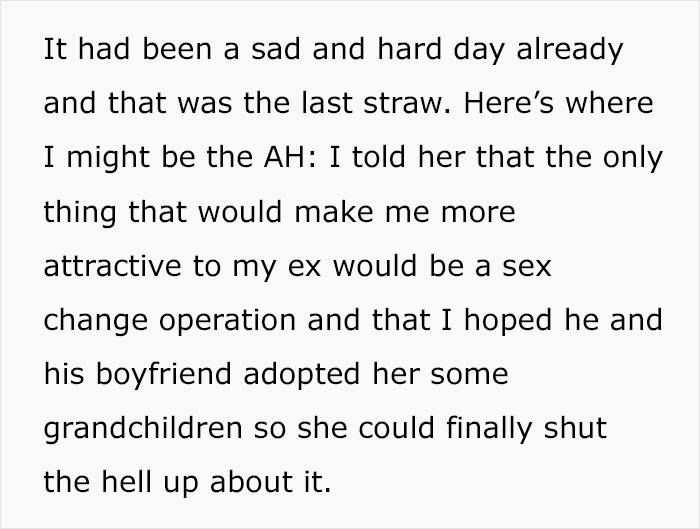 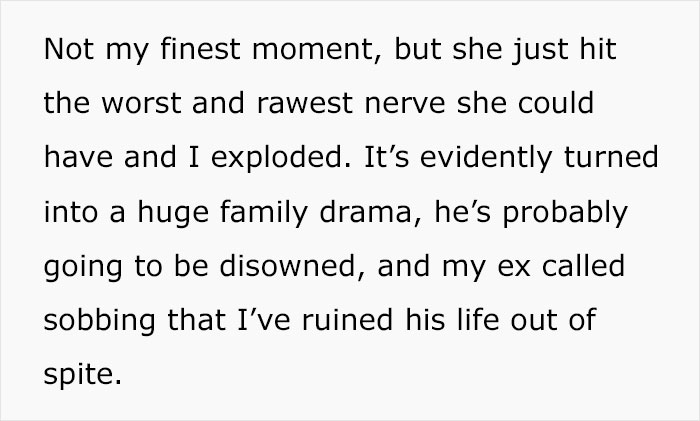 As of the time of this article, the story is still pretty fresh, but there were some developments in it, as explained OP: “The only thing new is that it looks like I’m going to have to press charges on the ex for breaking the restraining order. My Ring system showed he was at the house trying to get in yesterday afternoon before I got home from work.”

“Other than that, I’m trying to decide now whether to move out of the community. It’s a smallish town and a lot of the families are interconnected, so my ex’s version of events has caused me some problems recently with friends and people in the local LDS stake.” 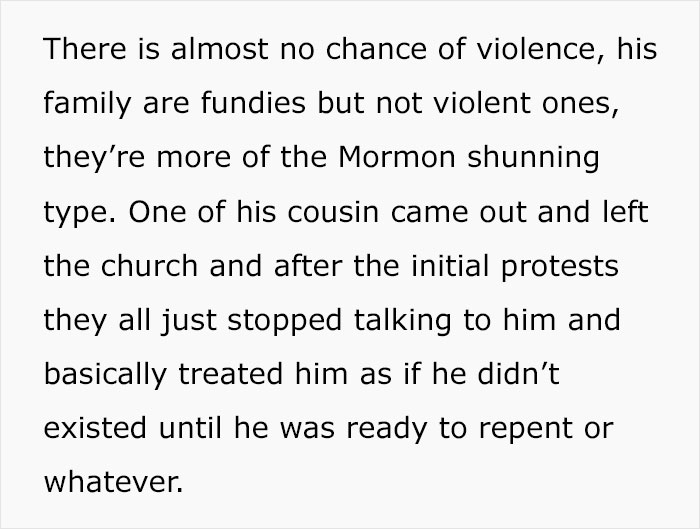 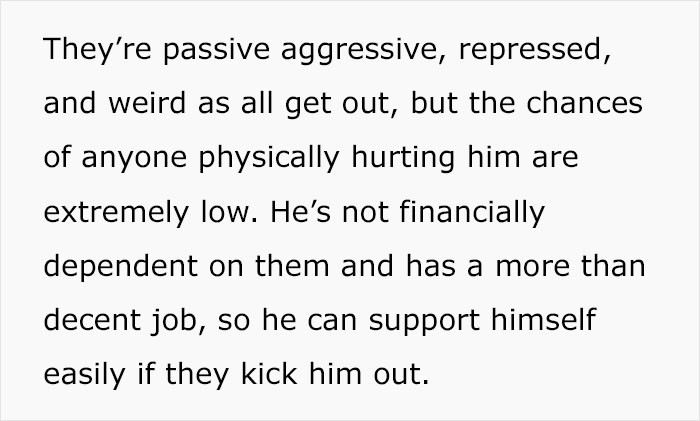 OP turned to the Am I The A-Hole community to figure out who’s at fault here. In the beginning, there was a huge influx of YTAs (you’re the a-hole) because she exposed a huge secret about the ex, but the tide turned soon after a whole lot of people came in to defend her.

They argued that lying is still lying, and cheating is still cheating, and this is besides the fact that the ex willingly kept his sexual orientation a secret, and with this trying to push her into some faux traditional family scheme without her consent. In other words, the guy had a-hole written all over him.

“I really didn’t know what to expect and it was helpful to see the way that other people weighed the situation because I’m so conflicted about it myself,” elaborated Life After Love. “I’m mortified that the whole thing happened in the first place, but it’s comforting to hear that even a lot of LGBTQ people understand and don’t blame me.”

“I also understand why those who said ‘Everyone Sucks Here’ and ‘You’re The A-Hole’ have their opinion. It helped me get some personal resolution on the situation so I can move forward. After having been lied to so much and made to feel like the problem, it’s hard to not default to that ‘it must be my fault’ position out of the gate.”

While some did genuinely think OP is wrong, most still argued that she’s not the bad guy in this situation, expressing their support 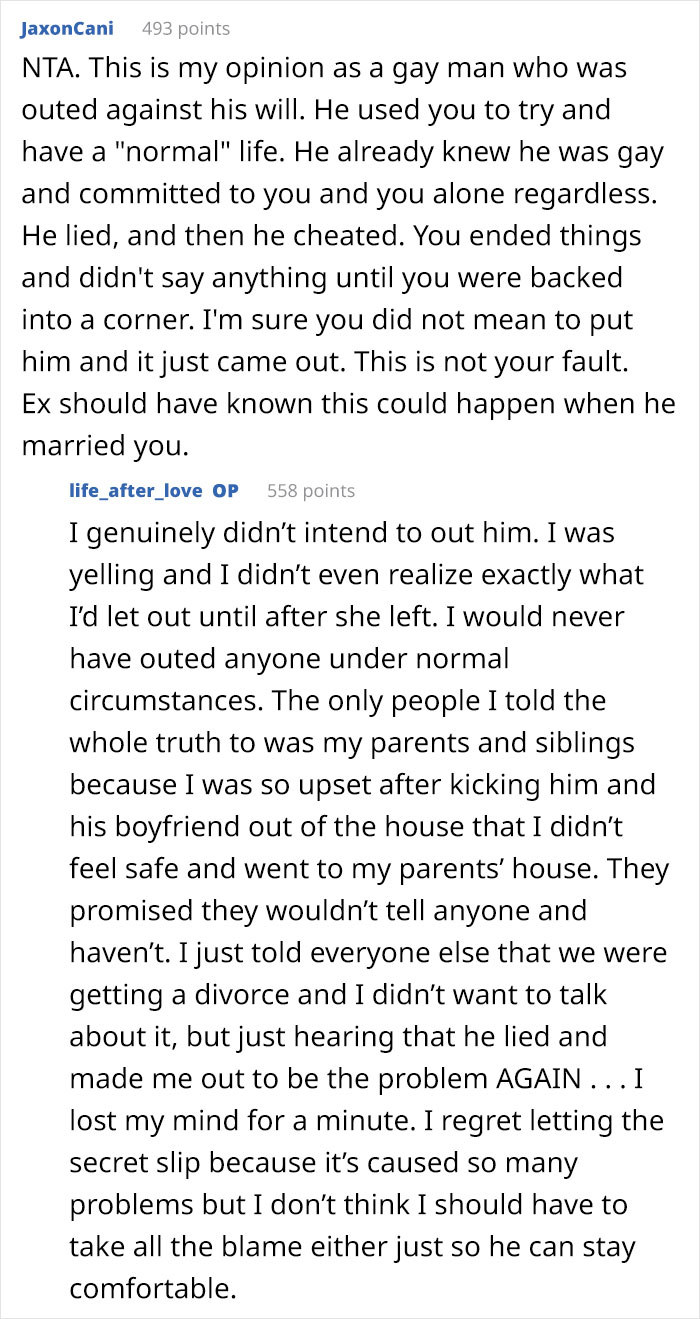 The post quickly picked up traction online, gaining over 19,000 upvotes and nearly 60 Reddit awards. As of this article, the post is already locked, which means people cannot comment any more, but Life After Love still managed to get some edits in for context and the post was flared as Not The A-Hole.

“The worst thing is that my reputation in my community and LDS stake has been ruined because of what my ex has been telling people and I’m not sure if that can be fixed,” said the woman. “People are nice enough not to say anything for the most part, but there’s been a noticeable change with the way I’m treated. My stake president called me in for a chat, and I told him about the cheating, so he said he understood and would try to correct some of the rumors, but I don’t know. It breaks my heart that I tried so hard to do everything right and it’s still seen as my fault.” 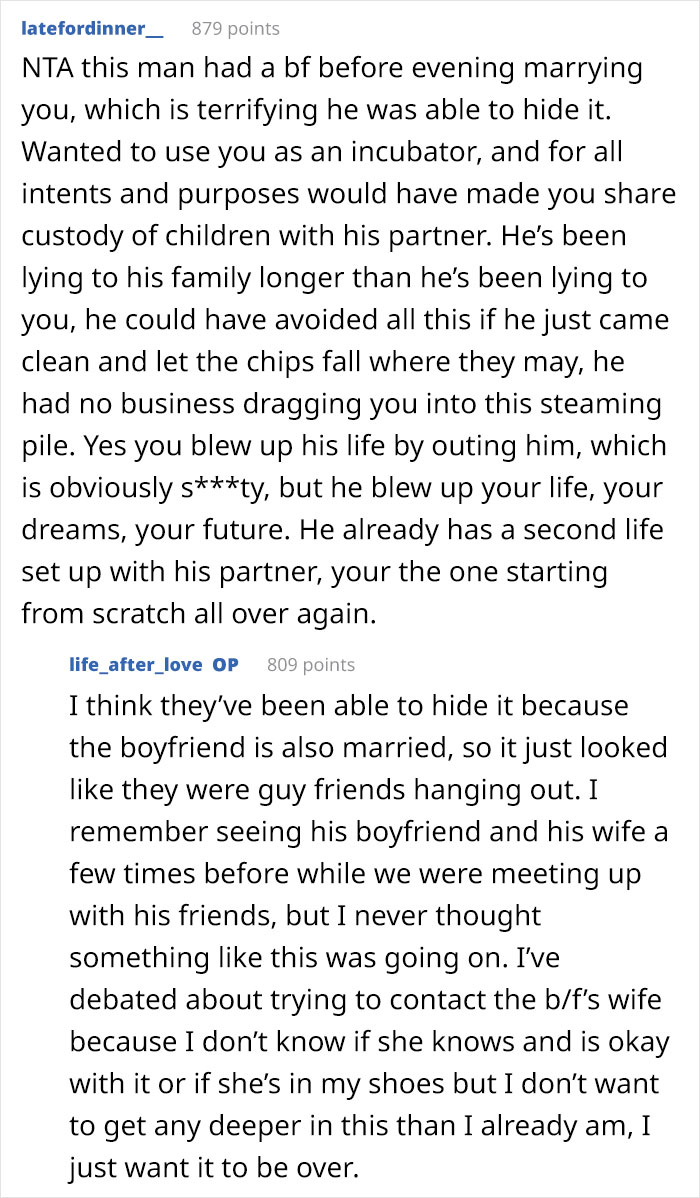 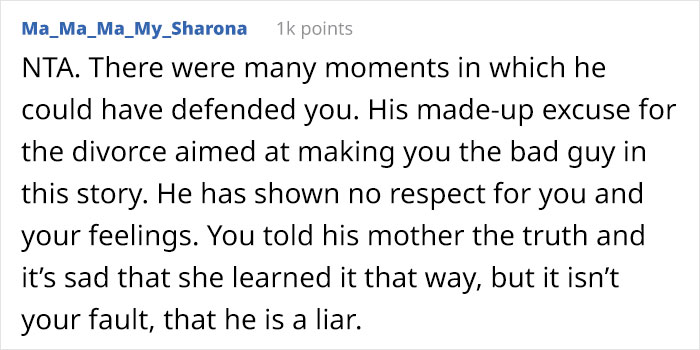 We’ve also asked OP if she could share any advice for anyone else dealing with similar situations, and she had this to say:

“If you’re going through hell, just keep going. It can’t last forever. I’m tired and sad and very upset with all of this, but I won’t let my ex steal any more of my life than he already has. I’m going to get therapy and rebuild and try to be happy in spite of him because everyone deserves that. Don’t be poisoned by your pain and finish tearing yourself down in someone else’s place.” 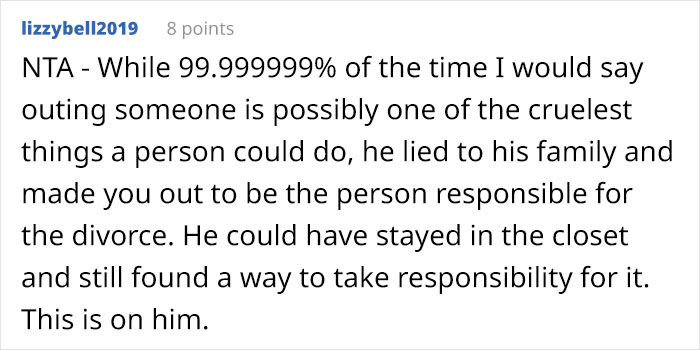 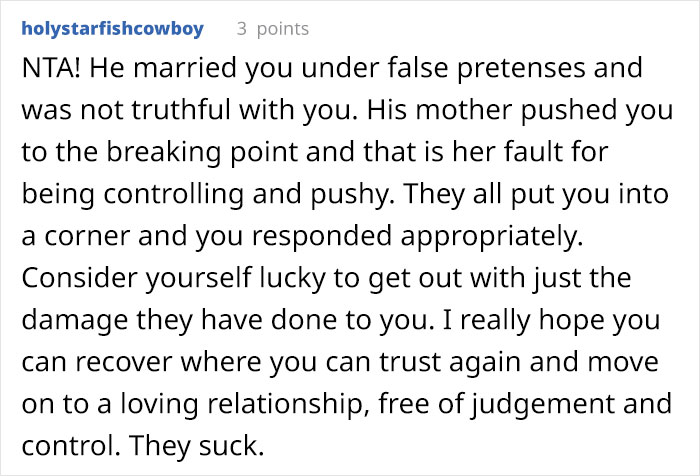 She also noted that there was a commenter who mentioned that her post could be misinterpreted as anti-LGBTQ propaganda, which has been weighing on her, but she reassured that it’s not the case and kindly asks people to not generalize and stereotype based on this story:

“I just want to say that there are several LGBTQ people in my life that I love very much and who would never do this to anyone and I would be so sad if my story was used to harm or denigrate them. My ex didn’t hurt me because he’s gay, he hurt me because he’s hurt inside somehow and he just passed all that fear and darkness on to me. I don’t want bad things for him or any other LGBTQ person and if anything, his family set this situation up by being so intolerant.”

You can get the full scoop by checking out the story in context on Reddit. But before you go, tell us your thoughts on this in the comment section below!

The post Woman Online Wants To Know If She's Wrong For Outing Her Gay Ex To His Mother After He Blames Her For Divorce first appeared on Bored Panda.