While parents are in some sense super heroes to kids—usually their own, but not necessarily, I think Jimmy’s mom is cool —as they do understand and actually manage to deal with the immense pressures that come along with parenthood, sometimes there is so much expected of parents that it just becomes too overwhelming and they begin setting boundaries.

Well, one parent, who is about to become a grandparent, also had to draw the line somewhere when her son in law started straight up demanding she set up a nursery for the grandkid at the expense of one of her sons’ rooms. Needless to say, that conversation didn’t end well.

While sharing a room with a sibling isn’t all that bad, sharing it once you’re already a teen, let alone already had one is a bummer 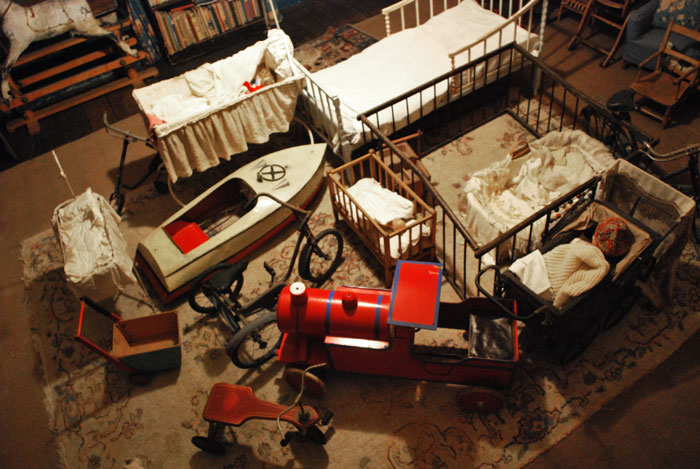 So, a woman has recently turned to the Am I The A-Hole community on Reddit with a short story, wondering if she was wrong to refuse to set up a nursery for her soon-to-arrive grandchild in place of one of her sons’ rooms, forcing them to share a room rather than to have separate ones.

The story goes that her 24-year-old daughter Avery and her 27-year-old husband, the son-in-law, Tom, are expecting their firstborn. Both are super excited and hella invested in the whole thing, so much so that it’s sometimes hard to get a hold of them at this point.

So, the couple was visiting grandma and during one of their conversations, Tom asked if she had emptied one of the rooms to be transformed into a nursery. OP was confused. Tom explained that it was something that was expected of her. Again, OP was confused. Even more so at this point.

This mom tried to protect her two sons from having to share a room, all because the older sister and her hubby decided one of their rooms ought to be used as a nursery 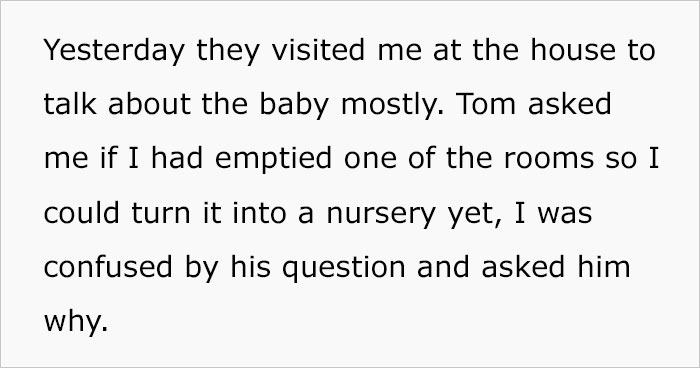 Turns out, it is “common” for the grandparents to prepare a nursery in their homes to welcome their grandson as a new member of the extended family. He also provided some examples of this happening. What is more, he even pointed out that his parents already did it.

It is worth mentioning that Tom’s family is much more well off than OP’s is, and they can afford nurseries just like that, but as it stands now, the soon-to-be grandma explained she can’t do that because there is no spare, nor the money for an individualized nursery that, according to Tom, should make sure the grandkid has everything they need whenever the family is visiting. The daughter seemed to agree with him. 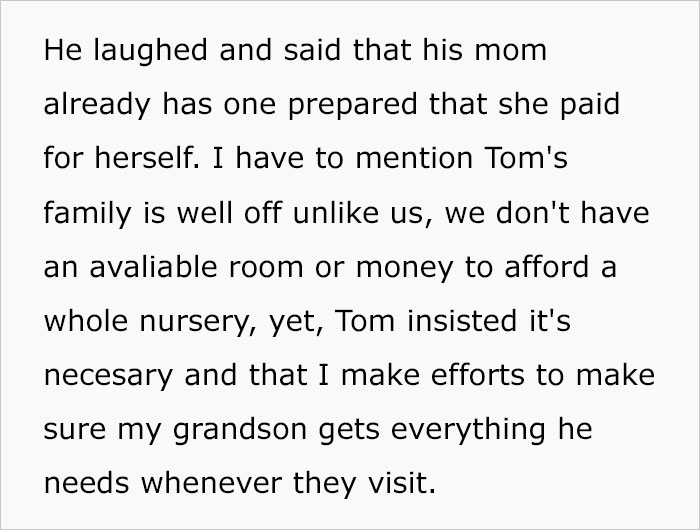 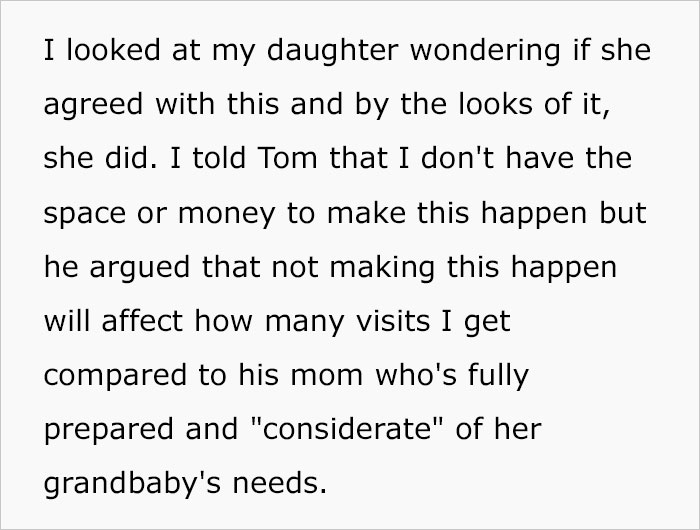 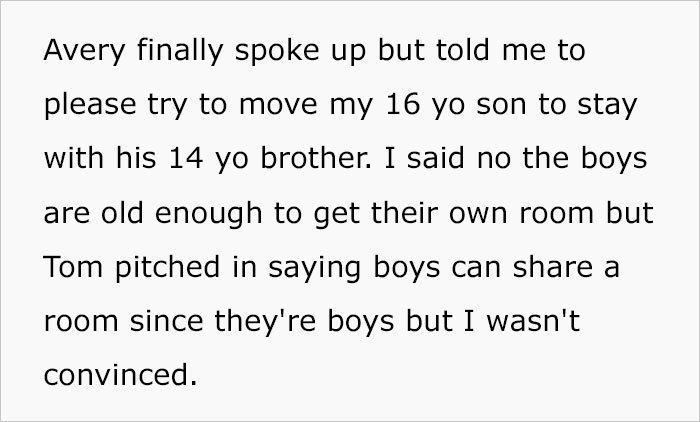 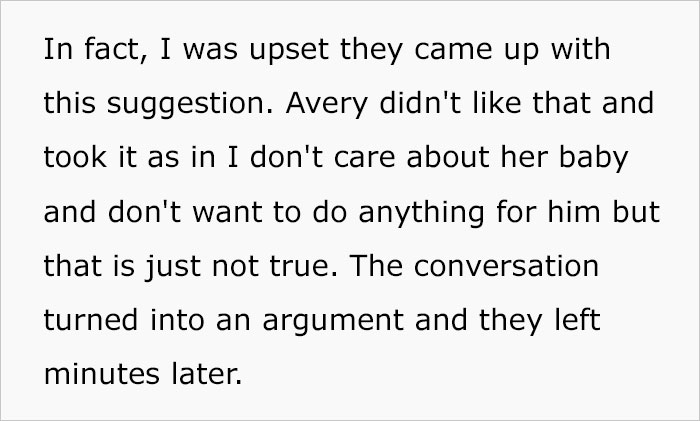 After the back-and-forth, OP’s daughter jumped in, suggesting she move her older teenage son (16) to live in one room with the younger one (14). The woman was against this, explaining that they are old enough to have separate rooms, but Tom objected, saying that they could actually live together because they’re boys.

All this escalated into an argument, whereby Avery started accusing the mother of not caring about them, or the grandchild, and left. And it didn’t take long for the dad to catch wind of this, who ended up siding with Tom and Avery. He accused her too, saying she favored the boys as always. OP, however, was convinced Tom’s and Avery’s request was a bit too unreasonable. 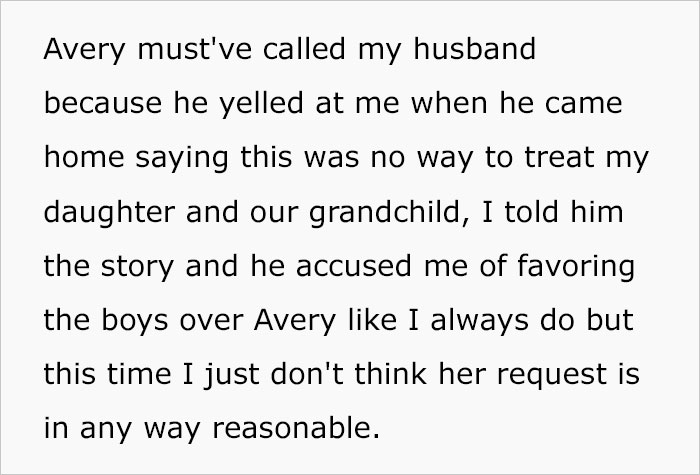 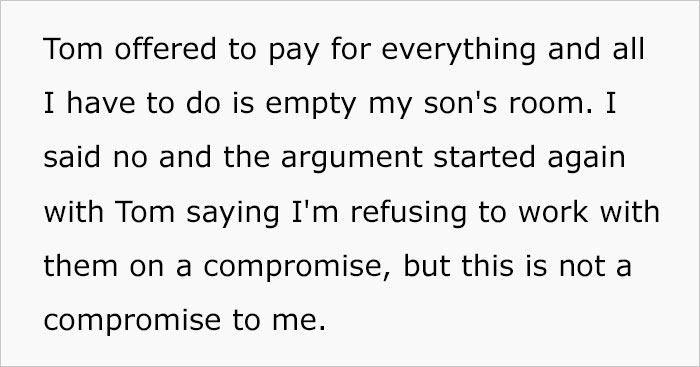 Despite Tom actually offering to cover the nursery setup expenses, this was non-negotiable for OP, as it would mean forcing her teens to live together while the grandkid has a reserved space for occasional visits. So, she turned to the AITA community for some perspective.

And perspective they delivered. The community ruled that she isn’t wrong to want separate rooms for her sons. Not only because of the whole ‘occasional visits’ thing, but also because it isn’t, in fact, ‘common’ for grandparents to dedicate full nurseries. It was more of a case of ‘normal’ being grandparents having pop-up cribs and some toys.

Some parents on Reddit argued that it was also normal for the parents to bring everything with them everywhere. Plain and simple. Yet others pointed out just how entitled, and somewhat arrogant, it all was. In fact, some suspected they will want to ‘dump’ the baby on everyone else.

The internet was having none of it, and decided that the woman was not wrong to not allow for a nursery 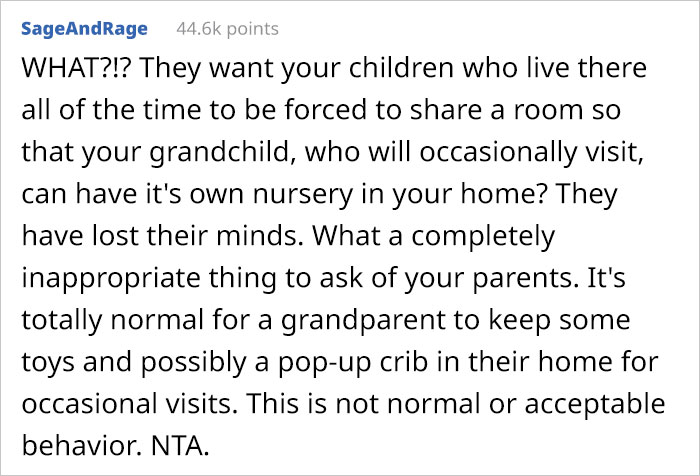 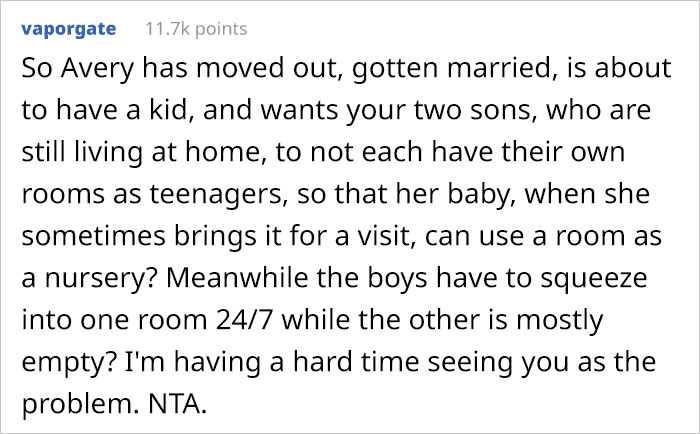 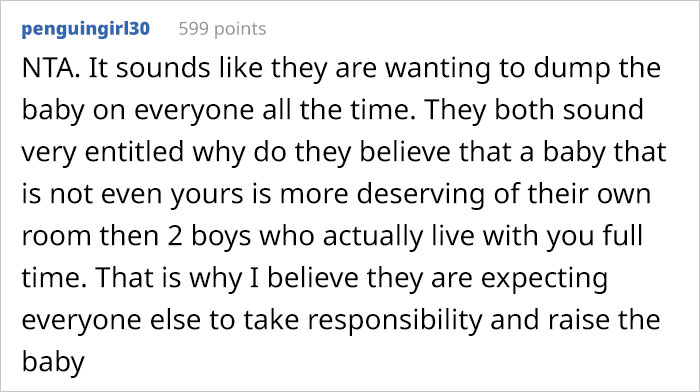 Regardless of opinion, the post was a success. It got over 20,000 upvotes (with 96% upvoted) and 60 plus Reddit awards, all the while generating over 3,500 comments. And one of the top comments was upvoted over 44,500 times, so there’s that.

You can check out the post in its entirety here, and go check out other Am I The A-Hole articles available on Bored Panda here. But before you go, tell us your opinions and thoughts in the comment section below!

The post Woman Refuses To Kick Her Son Out Of His Room To Make Space For Full-Blown Nursery Her Daughter And SIL Are Demanding first appeared on Bored Panda. Mom Convinces Daughter Not To Squander Her 250K...