Would The Knicks Accept This Trade Offer From The Lakers? Russell Westbrook And DeAndre Jordan For Kemba Walker, Evan Fournier, Kevin Knox, And Nerlens Noel 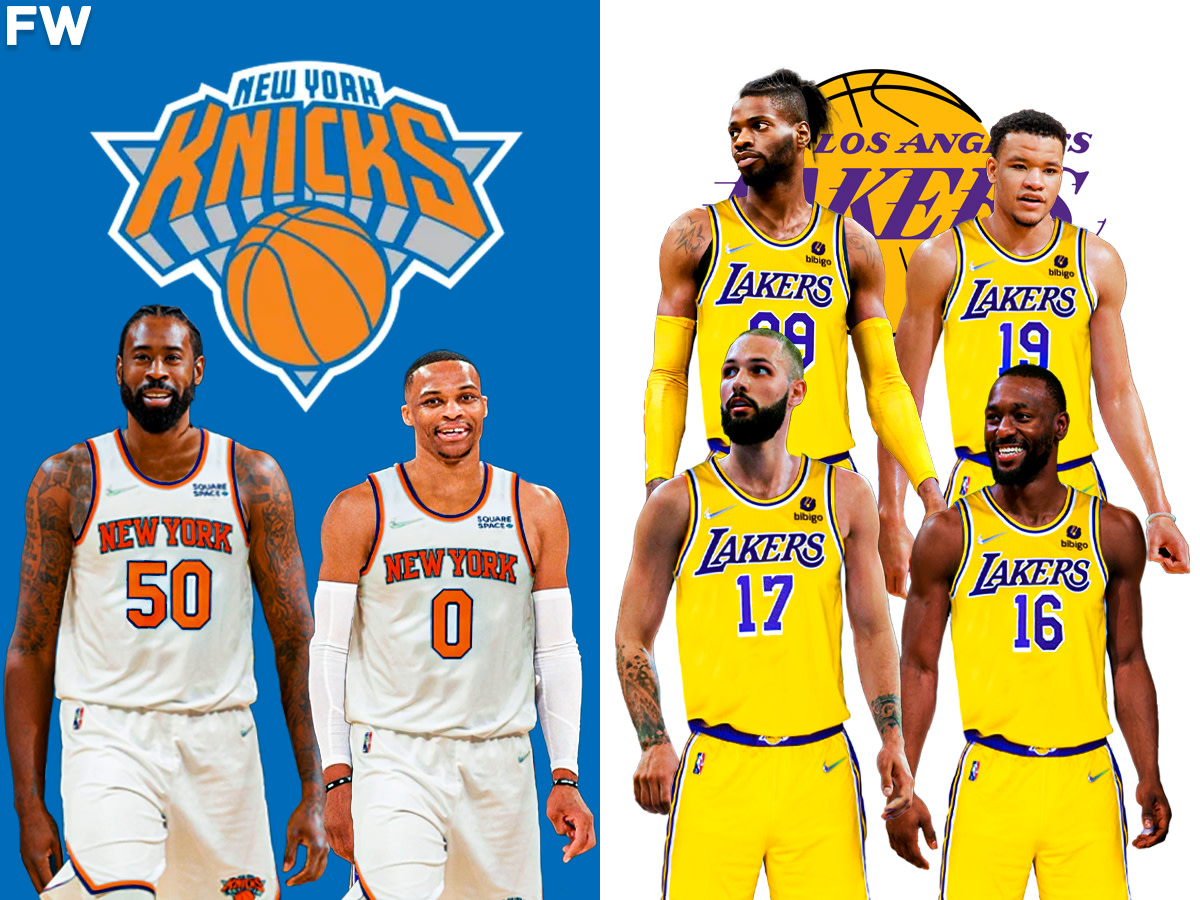 There has been a recent trade proposed by the Instagram page knicks_wrld, which was reshared by another Instagram page named basketball. The trade featured Russell Westbrook moving to the Knicks. Here is the hypothetical trade package:

Fans had some reactions of their own to the proposed trade, and it is clear from the comments that the reactions were quite mixed. Obviously, no trade is going to make every single person happy. 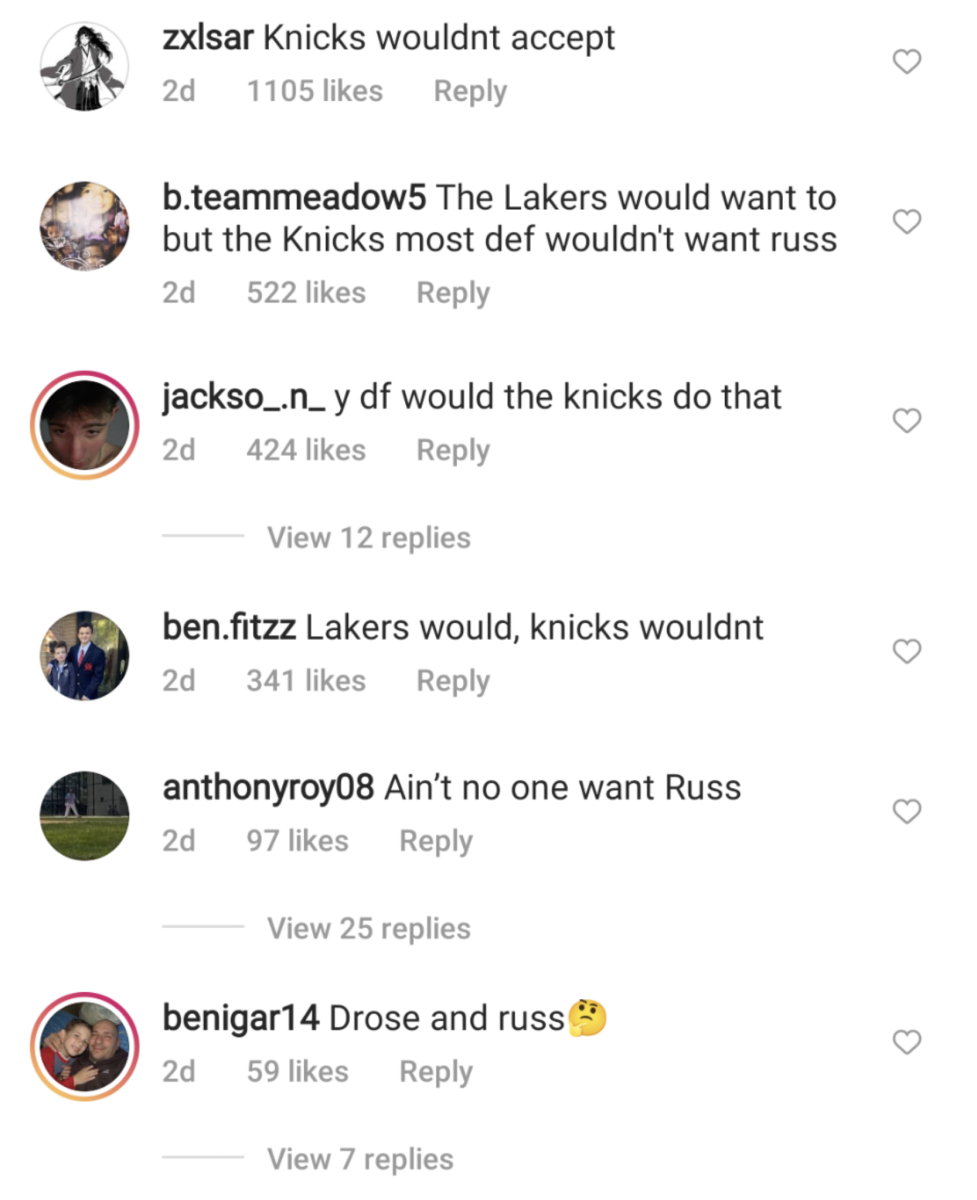 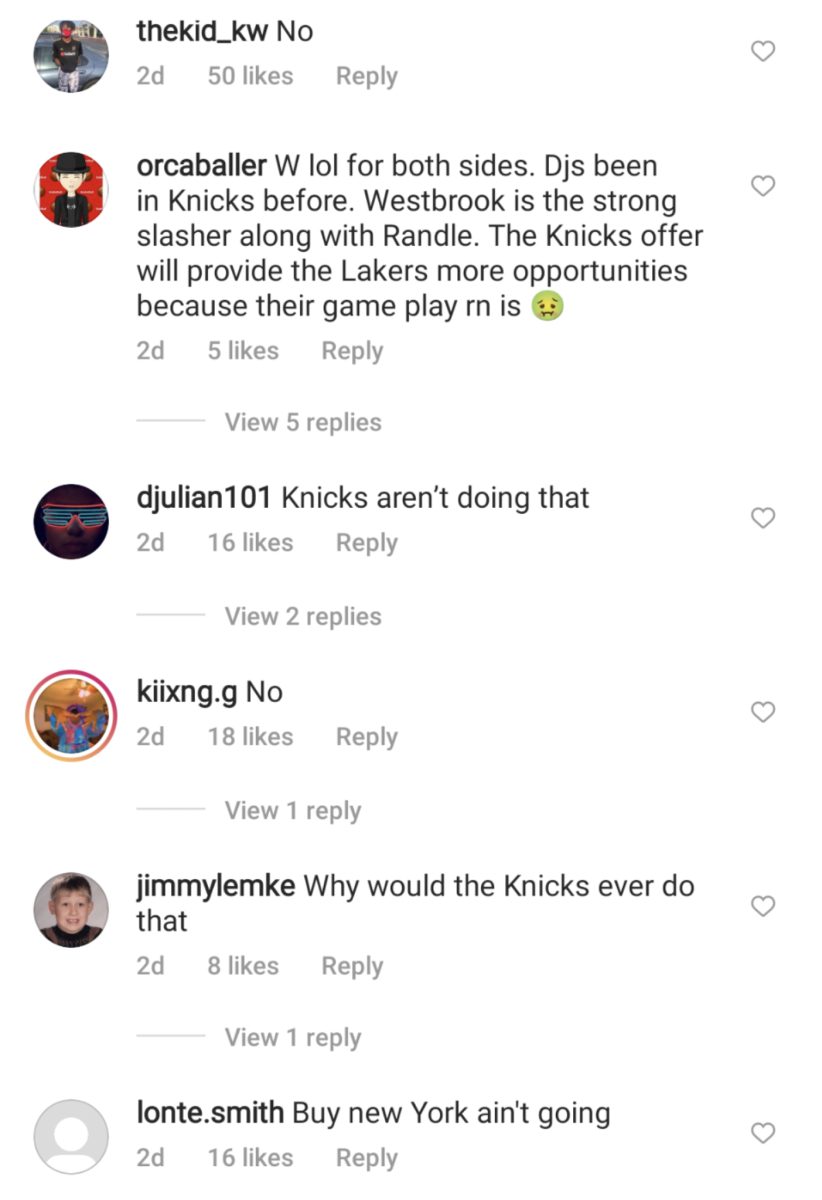 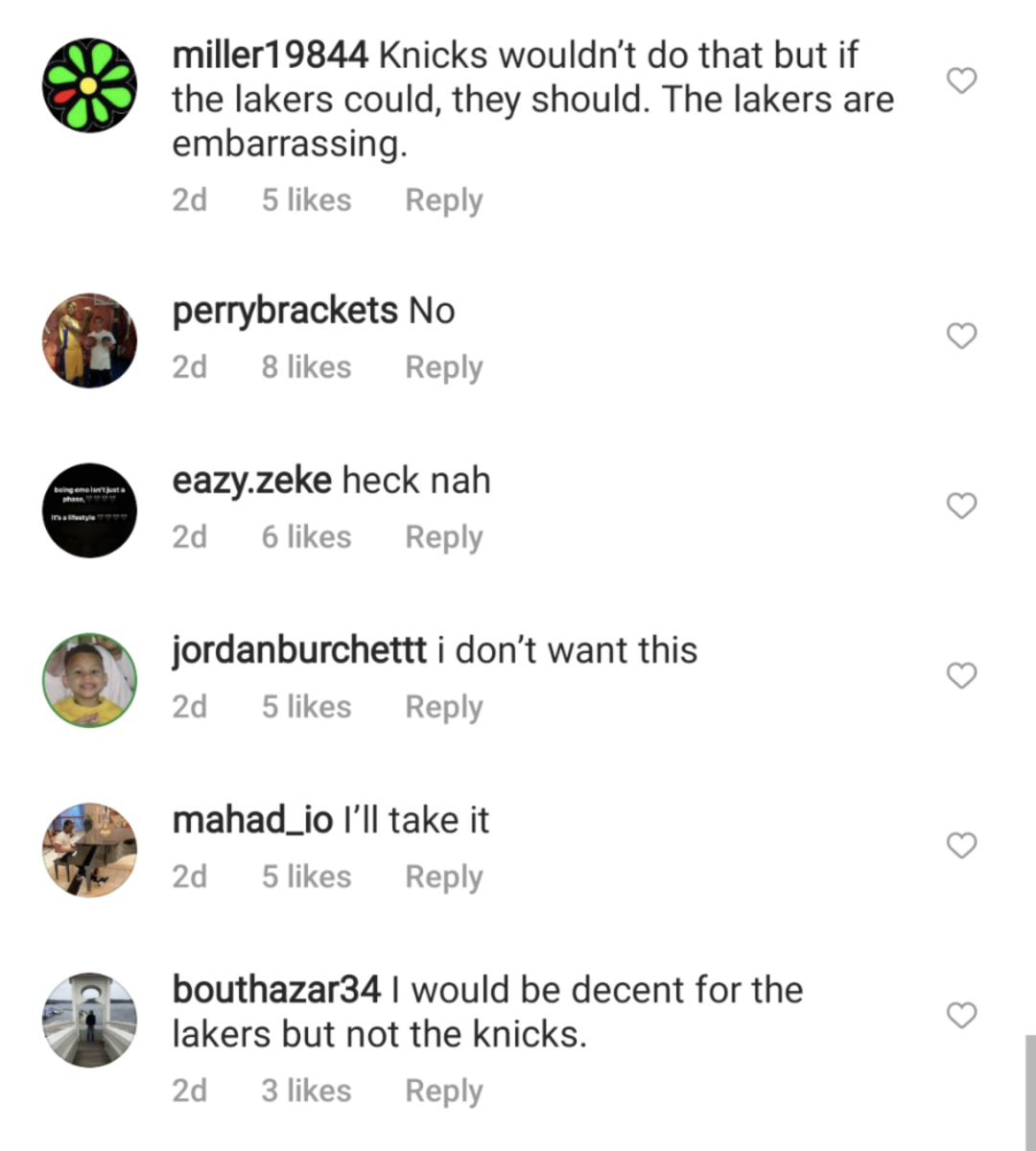 Below, we have provided our analysis of this potential trade, and how it works out for both teams. There is no doubt that there are benefits for both sides, but there are few trades that are completely even.

The New York Knicks have an All-Star in Julius Randle, and he deservedly won the Most Improved Player award last season. However, his averages are down in a lot of categories this season. For example, his scoring dropped from the 24.1 PPG he averaged during the 20202-21 season, down to only 19.0 PPG this season. He has also been far less efficient this year.

Part of the reason for Randle's struggles may be the lack of other elite offensive players next to him. Currently, there is no other scorer on the Knicks that is averaging more than 15.0 PPG, and that is not an ideal situation to be in. Some of the New York Knicks' offensive struggles showed in their playoff series against the Hawks last season, and it's obvious that they have continued.

Russell Westbrook moving to the New York Knicks would help Julius Randle reduce some of his offensive load, and allow him more room to operate due to having another scorer on the roster. The reduced scoring and playmaking load with Westbrook's acquisition could help Randle become more efficient and start playing as he did during the 2020-21 season.

Westbrook would give the New York Knicks another ballhandler, and he would be a clear upgrade over pretty much anyone in their point guard rotation. Westbrook is currently averaging 20.6 PPG, 8.4 RPG, and 8.7 APG. They could

DeAndre Jordan would be the other piece in this deal, and he'd likely be able to eat up some minutes at the backup center. He would be a solid player in limited minutes, but likely not elevate the team by much.

The Los Angeles Lakers have been a very inconsistent team this year, and it is quite possible that a trade needs to be made in order to help them reach their full potential. This trade would allow them to gain depth options, but it would reduce the star power on the squad.

Adding Kemba Walker and Evan Fournier to the team would improve the shot creation and perimeter capabilities of the Los Angeles Lakers roster. Julius Randle previously lauded the duo for being able to "really shoot the ball". The Los Angeles Lakers have struggled with consistent 3PT shooting this season, and perhaps this trade would be part of the solution for that problem.

Kevin Knox hasn't played much this season, but he was a solid wing shooter during the 2020-21 season, averaging 39.3% from beyond the arc. He was also a solid enough defender in spurts. While he hasn't had the opportunity this year with the Knicks, perhaps some bench minutes on the Lakers can help get his career back on track.

The last piece of this trade is Nerlens Noel, who is currently out with an injury. When he's healthy though, he is an amazing rim protector and rebounder, as well as a lob threat on the offensive end. He'd give the Los Angeles Lakers a capable defensive-minded center with athleticism, and that could really benefit the team, who has struggled with their defense.

Overall, the Los Angeles Lakers may lose out on a bit of talent, but they'd get some solid pieces in exchange for one star. Sometimes, you have to give up one player to improve the rest of the roster, which seems to be the idea here.

The Los Angeles Lakers have a big 3 on their roster, that hasn't worked out particularly well thus far. They would get a decent number of rotation players who would fit well next to LeBron James and Anthony Davis, and there are some clear positives that come with that.

The New York Knicks would get another star, and it's clear that Westbrook would likely improve their offense. They would likely be a better team on offense, but their depth would be hurt in this scenario.

This trade is a win-win scenario. The Los Angeles Lakers would revamp and become a better-balanced roster, and a duo of LeBron James and Anthony Davis surrounded by versatile role players is a good strategy for success. After all, that's how they won in 2020. The Knicks would be a much more competitive team, but a Julius Randle-Russell Westbrook duo wouldn't get that far in the playoffs. While both teams would have something to gain, the slight edge in "winning the trade" would go to the Lakers. John Wall Denies Report That He Wants To Be The...