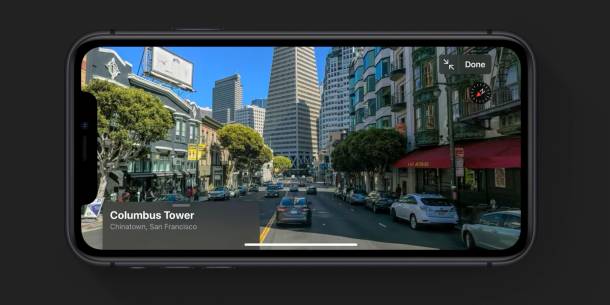 It might be a while until Apple Maps reaches feature parity with Google Maps, but Apple hasn’t stopped improving its iPhone navigation app. Every new iOS release introduces several Apple Maps enhancements, but the features might not roll out immediately to all markets. “Look Around” is one such feature, and now Apple has quietly begun rolling out support for international markets. Announced last year, Look Around is essentially Apple’s version of Google’s Street View functionality that’s available inside Google Maps.

With Street View, you can get down to street level and check out the surroundings of your next destination. The feature is incredibly useful when navigating to new places, giving you 360-degree views of your destination and every stop along the way. Well, Google Street View cars would have had to map your destination first, but Google has already added Street View to most countries.

Apple’s Look Around feature is more limited than that, having rolled out initially only in the United States. The concept is similar to Google’s. Apple cars loaded with cameras travel the streets of each town, continuously capturing 360-degree images of everything. The resulting images are stitched together and added to map data for that location.

To access Look Around on an iPhone or iPad, all you have to do is click on the binoculars, if it shows up on the street. This is where you’ll notice the first differences between Look Around and Street View. Apple Maps displays the ground-level images in a pop-up window on top of the map, which is slightly more useful. But Look Around can take over the entire screen if you need a bigger version of it. Look Around also displays points of interest atop real-life imagery, which you can tap to obtain more information. The navigation of Look Around seems to be smoother than Street View as well — the following clip offers a quick look at the Look Around feature.

Apple will need more time to map the entire world with its fleet of Look Around vehicles, and to add the visual information to local maps. But Japan is now the first market outside the US to get support for Look Around.

Per AtaDistance, the Look Around feature is now available for Tokyo and locations in greater Osaka and Nagoya. The feature is limited to roadside views, the blog notes, but could be expanded in the near future. Apple supposedly wanted to release the feature in time for the now-canceled Tokyo Olympics. The event was postponed months ago due to the coronavirus pandemic.